It's that time of year again when large numbers of Common Sandpipers build up on the estuary. A total of 15 were around the site with the majority on the spit at Passage House. The last couple of times I've been on the train along the estuary I've also seen three or four flushed from the estuary wall between Flow Point and Teignmouth, so the count for the estuary as a whole could be up to 20.

Otherwise, it was much the same, however three juvenile Mediterranean Gulls gave me something nice to look at as they flew in and circled around Passage House before landing amongst the gull flock.

I'm off to Turkey tomorrow and won't be back for two weeks, but I'll leave you with some photos from today...

Posted by Laurie Allnatt at 13:49 No comments:

There was horse racing on again today which meant there were high numbers of Black-headed Gulls at Passage House, c400+. With them were just two Mediterranean Gulls, an adult and a juvenile, the adult being a different bird to Friday's. 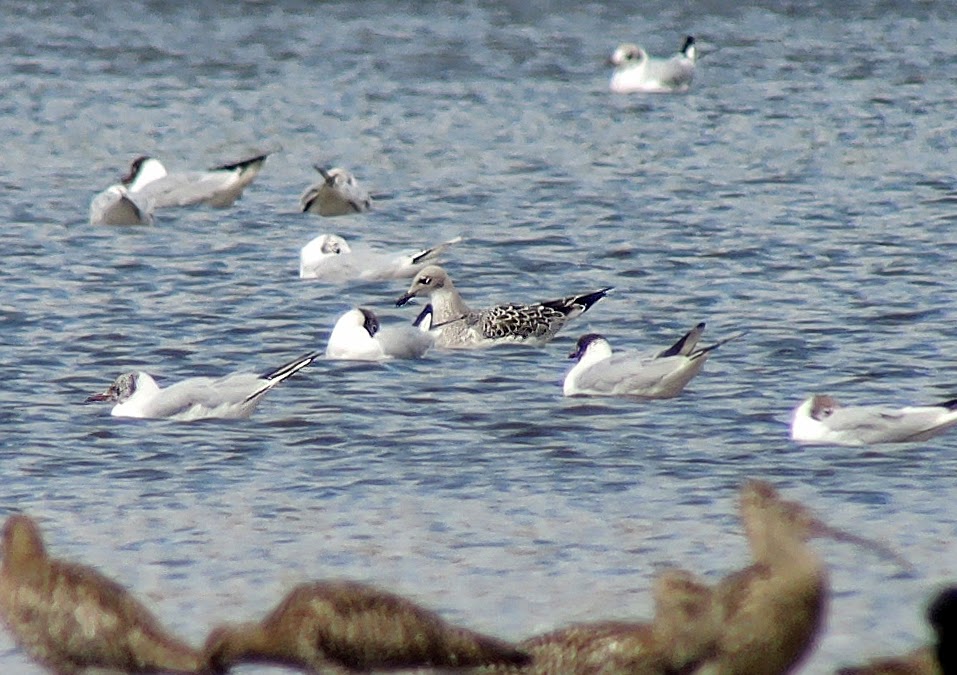 A look through the closer Black-headed Gulls proved worthwhile with two darvic ringed birds, which for a brief while were in the same scope view! One of them was white 27J1 which I first found on the 6th July. This bird was ringed as a chick at a breeding colony just south east of Reading, Berkshire in 2011. It was seen on the Otter Estuary later that year, and was seen back at the breeding site in April 2013.

The other bird was was new in - black A3S3. I very nearly missed this ring. I scanned past it, but then thought, "hang on, did I just see a ring on that bird?!" It seems as if this bird was ringed in Germany, but I'll update when I get a reply.

I find digiscoping invaluable for reading rings. If there's no heat haze I reckon I can get twice as much detail as just looking through the scope. It also allows you to analyze the ring on the computer when you get home in case the ring was at an awkward angle meaning only part of the code was visible, as was the case with the black ringed bird.

Posted by Laurie Allnatt at 19:34 No comments:

Not an obvious juv YLG

Yesterday there were plenty of gulls to look through at Passage House. After about 10 minutes of scanning I came across a gull that immediately looked a lot different to the juvenile Herring Gulls which where in good numbers... 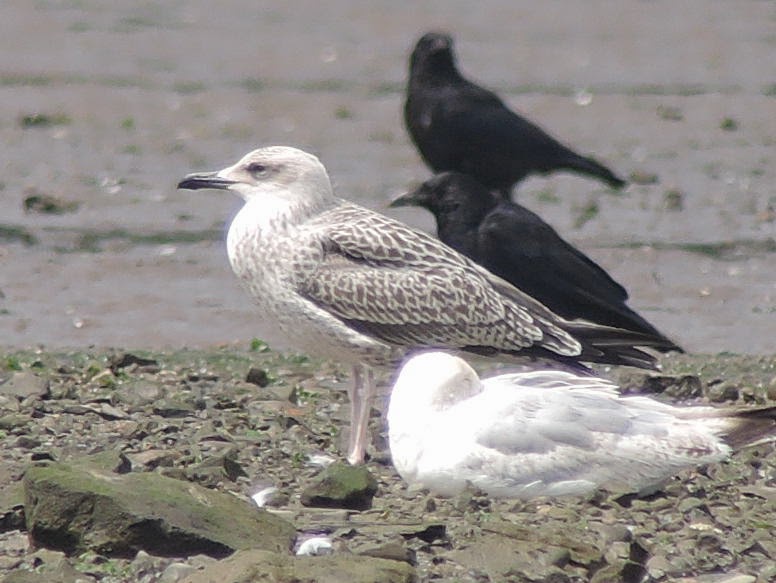 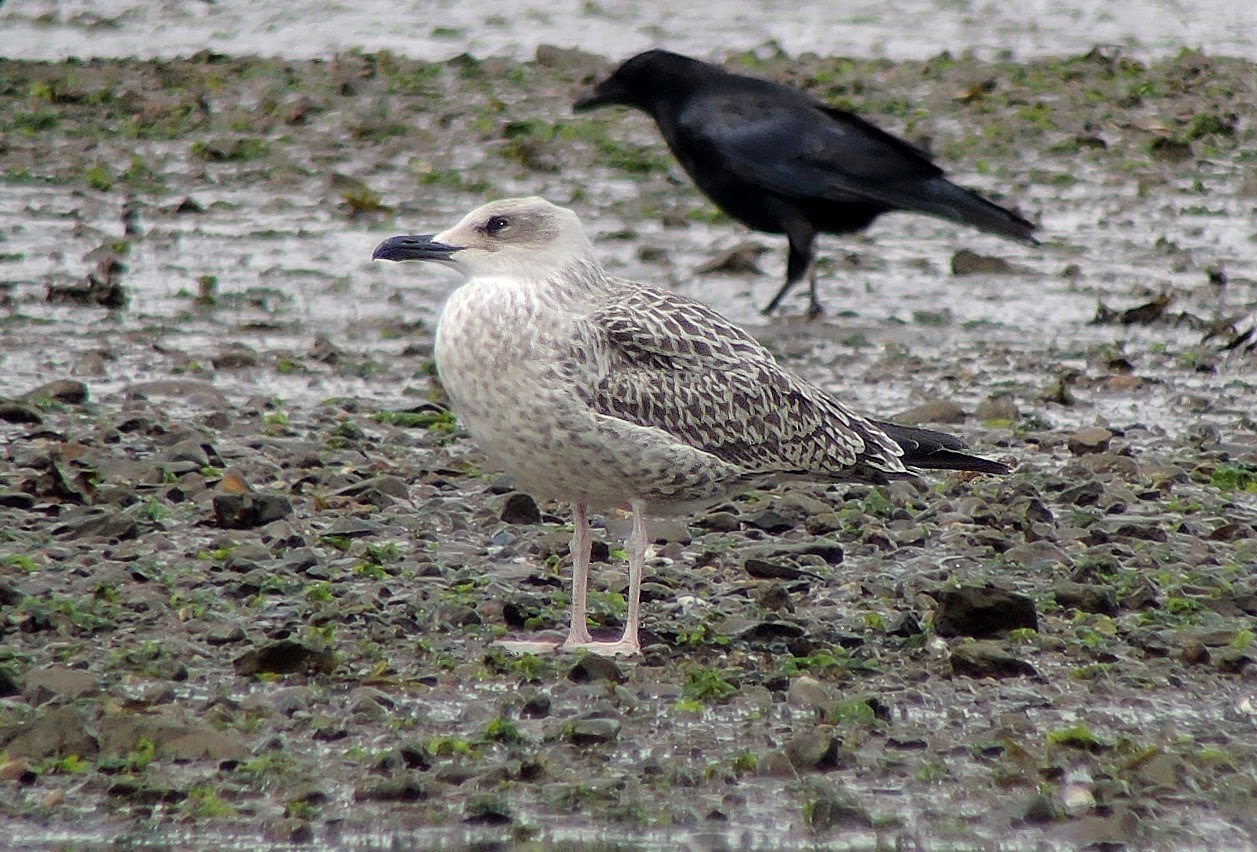 It was long legged, long winged, had a fairly large angular beak, a dark eye mask, and dark bases to the greater coverts. It was also noticeably larger in overall size than the nearby Herrings. These features all pointed towards it being a juvenile Yellow-legged Gull, however there were two things that were bugging me. The tertials had more notching than you'd expect, and there seemed to be a bit too much spotting on the inner greater coverts. Also, the scapulars perhaps aren't as dark as they are on some birds. I got a few glimpses of the tail and the open wings but failed to get a good shot of them. 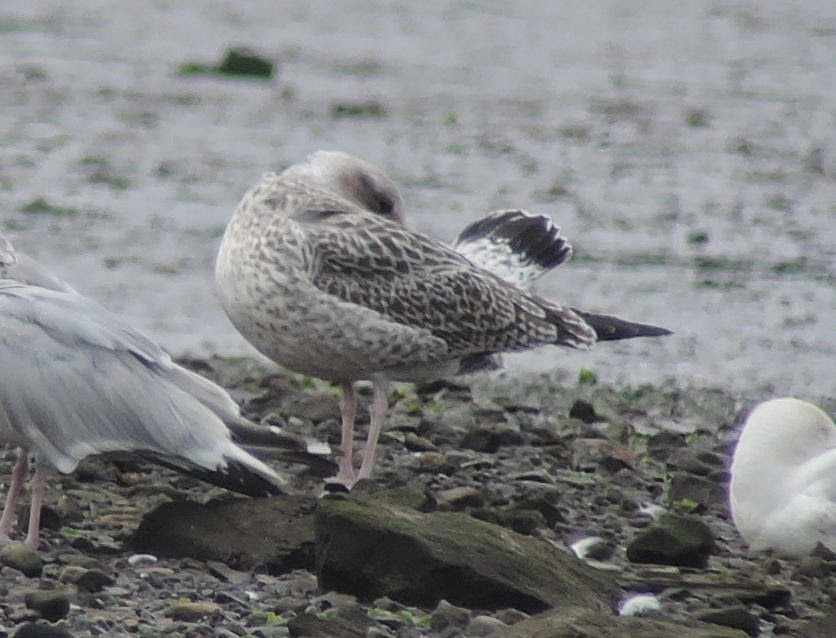 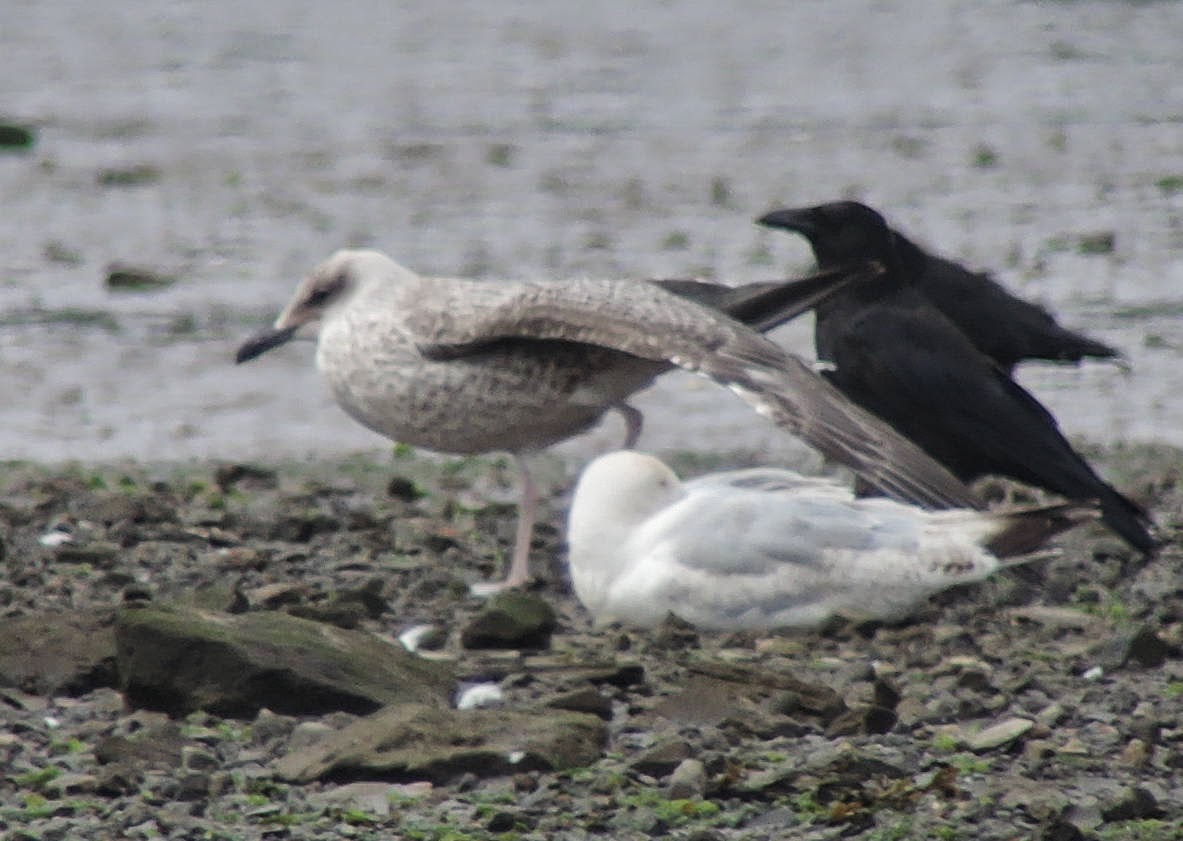 It eventually took off and gave me good views of the clean white rump and dark inner primaries, although again I couldn't get a good shot. 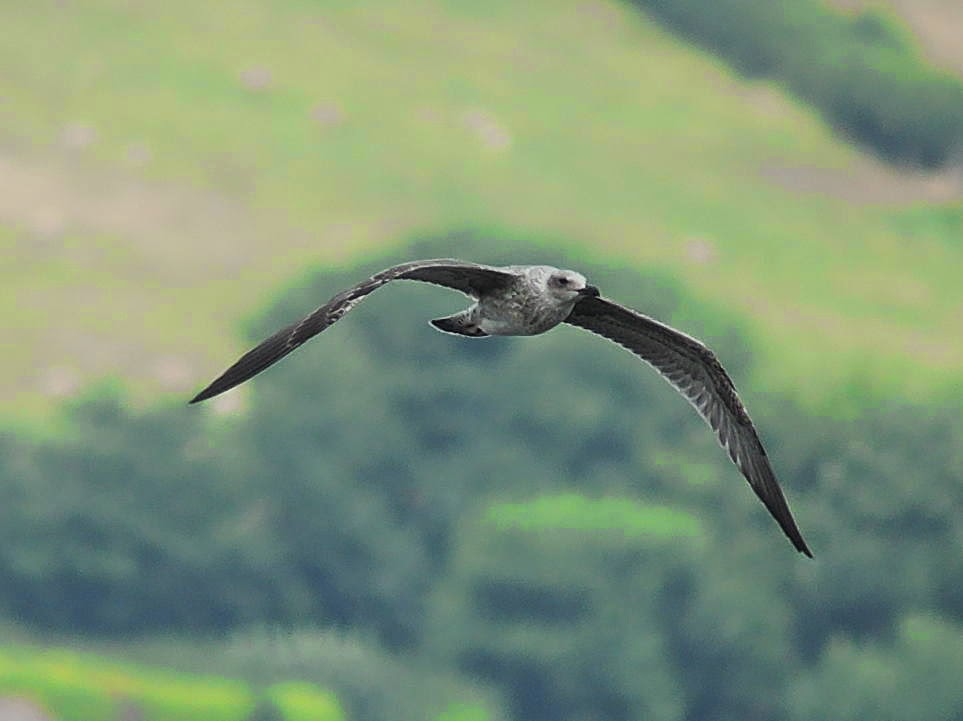 I would appreciate some more opinions on this bird. My own opinion (not that I'm a gull expert - far from it!) is that it is a Yellow-legged Gull. I just can't see it being a juvenile Herring Gull, but I suppose it's possible that it's a hybrid. 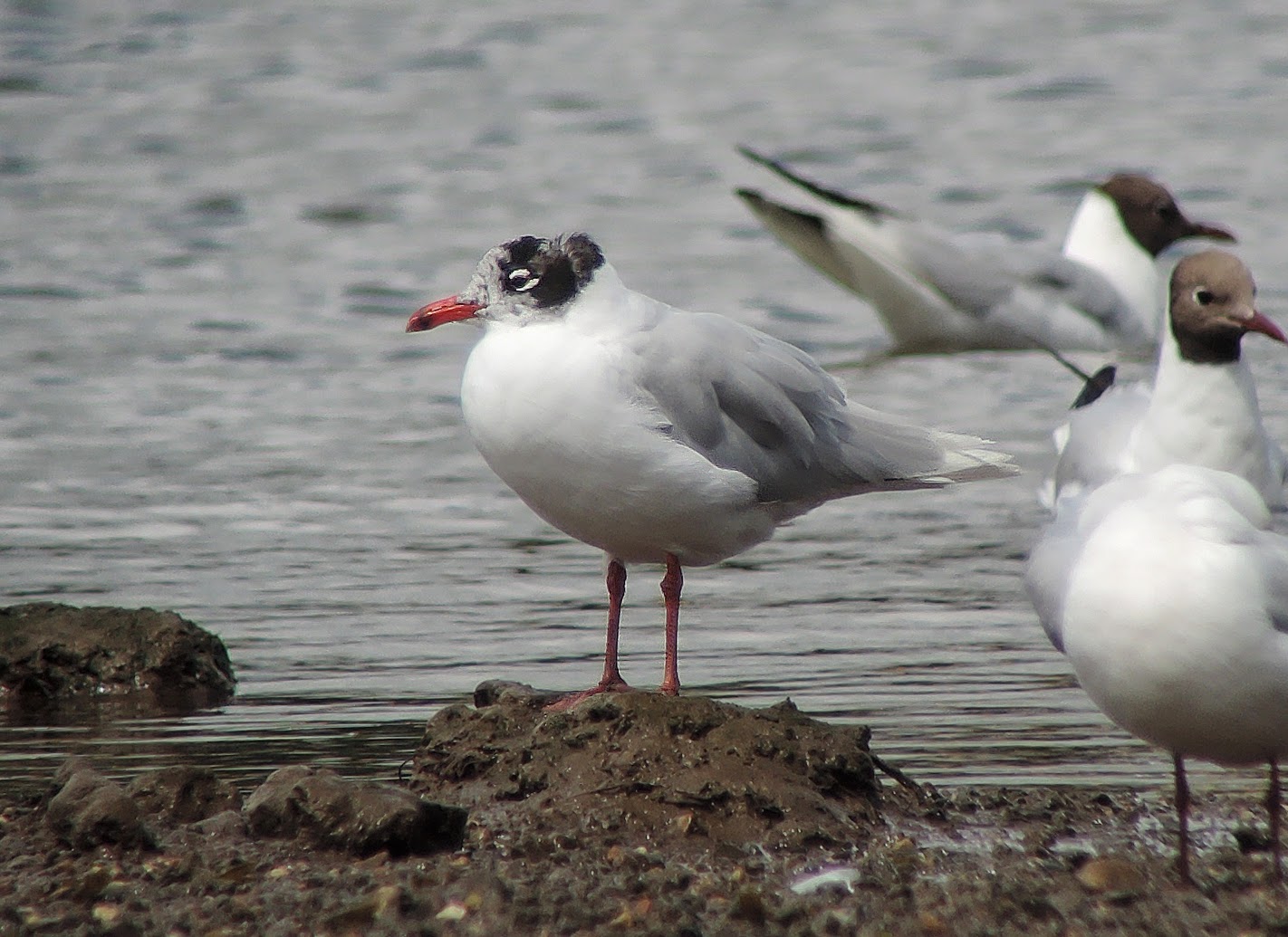 In other wildlife news, this Hornet Hoverfly was near Aller Brook.

It even landed on my hand! 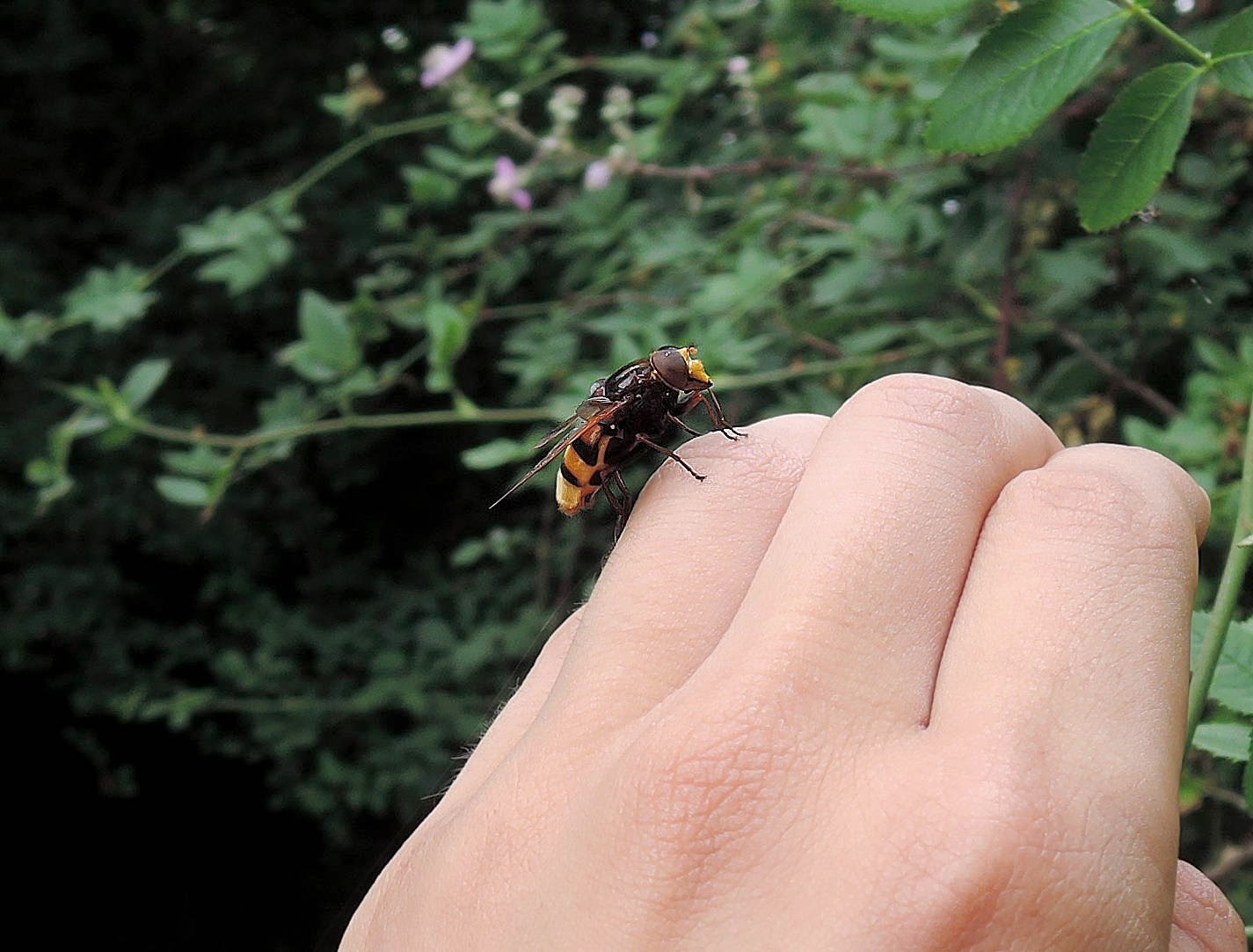 Bird news first - Will saw a female Goosander on Sunday swimming down river from Newton Abbot Town Quay, and yesterday I had a flock of c15 Manx Shearwaters off Shaldon.

On Decoy Lake today there were three juvenile and two adult Great Crested Grebes and a Siskin flew over.

I spent a while at Magazine Pond looking for dragonflies. All photos were digiscoped.

Posted by Laurie Allnatt at 19:08 No comments:

Due to Sunday commitments I did the WeBS count a day early and was joined by Laurie. We started by viewing Passage House from the bottom of Hackney Lane where a couple of noisy Sandwich Terns were flying about, 46 Mute Swans was a good count and the first returning Kingfisher was present. We next moved to Flow Point where a mixed group of waders comprised 80 Curlew, 18 Oystercatchers, two Dunlin and singles of Greenshank and Whimbrel. Four more Sandwich Terns were mixed in with the roosting Black-headed Gulls, although we failed to find any Med Gulls. Other totals from around the estuary included 36 Little Egrets, 22 Canada Geese, 9 Cormorants, 7 Shelducks, 10 Mallards and five Common Sandpipers.

We parted company at Passage House, with Laurie returning home via the new footbridge over the Teign where he found this Mandarin: 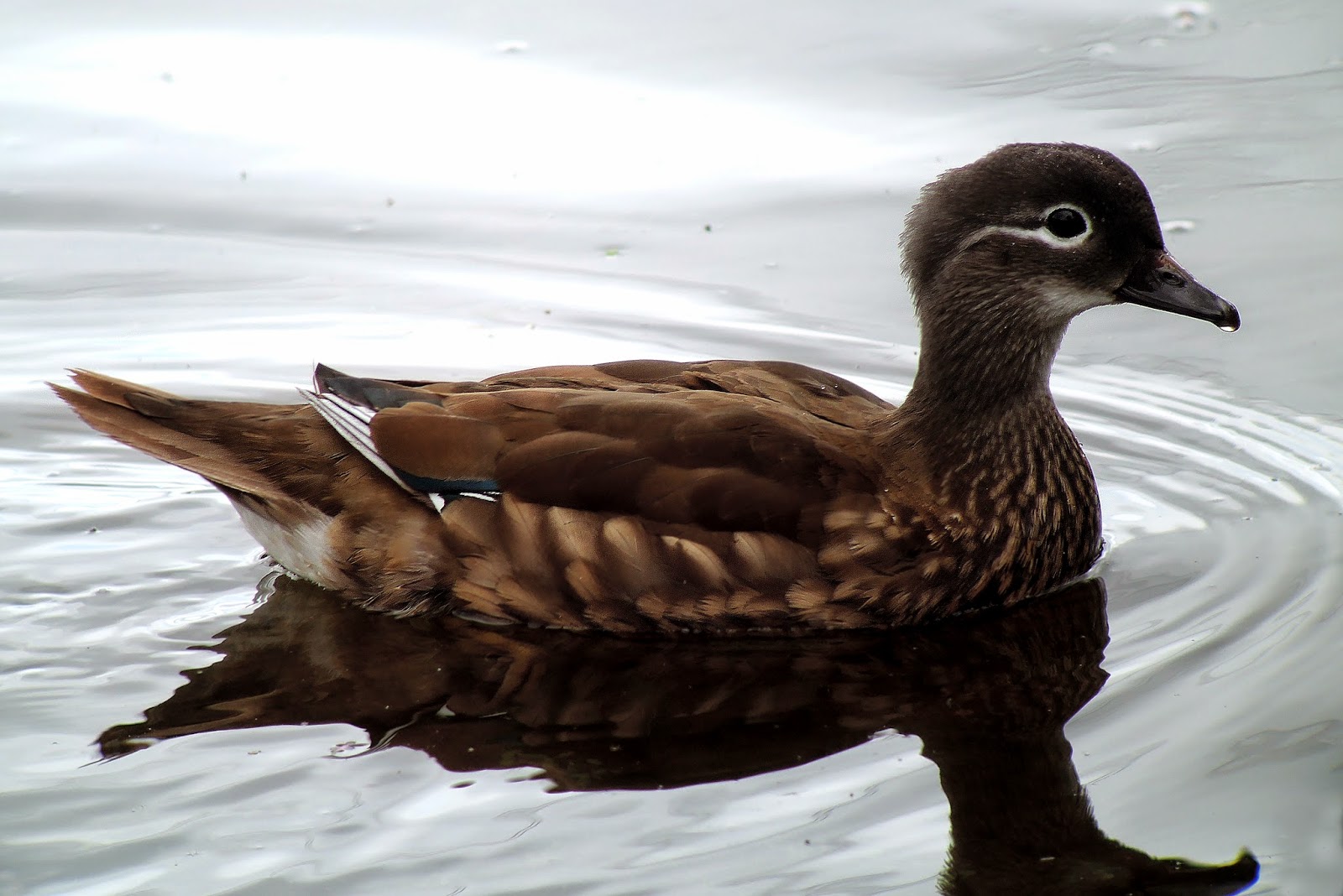 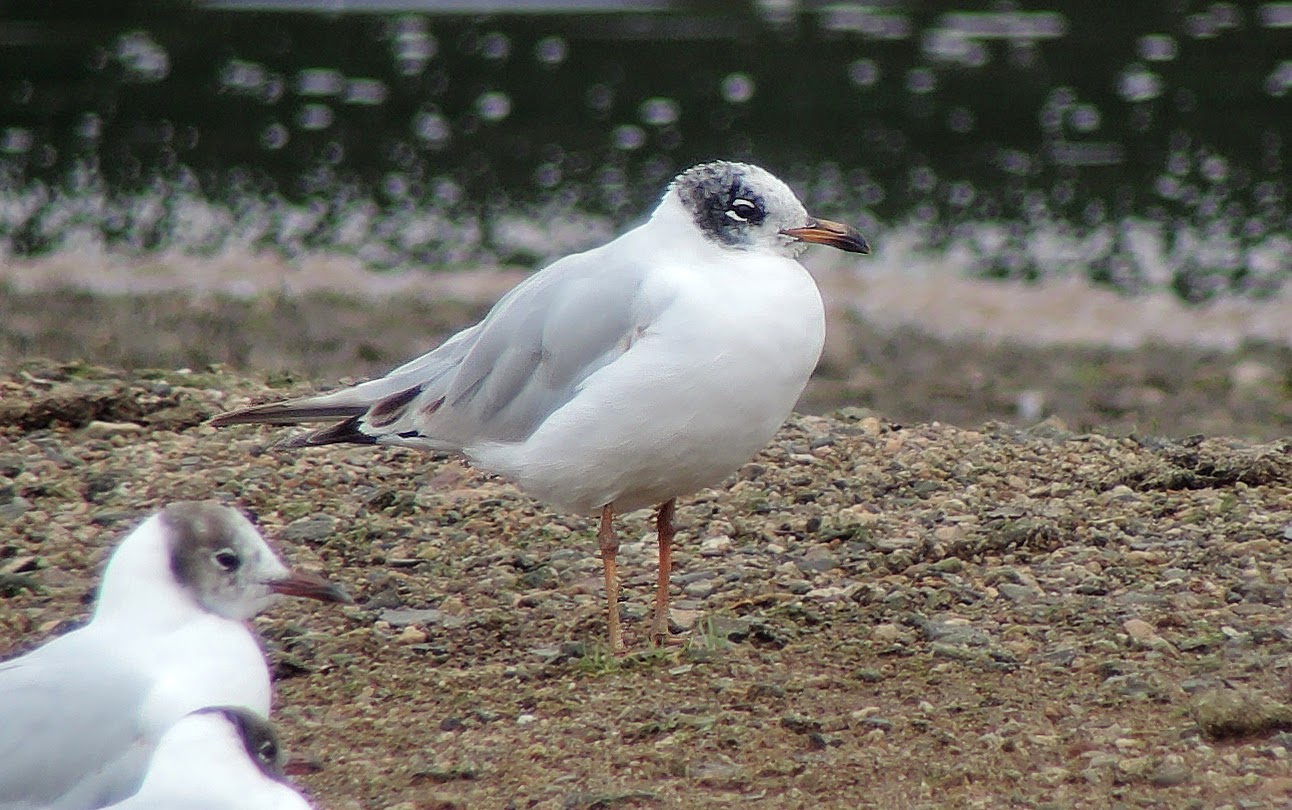 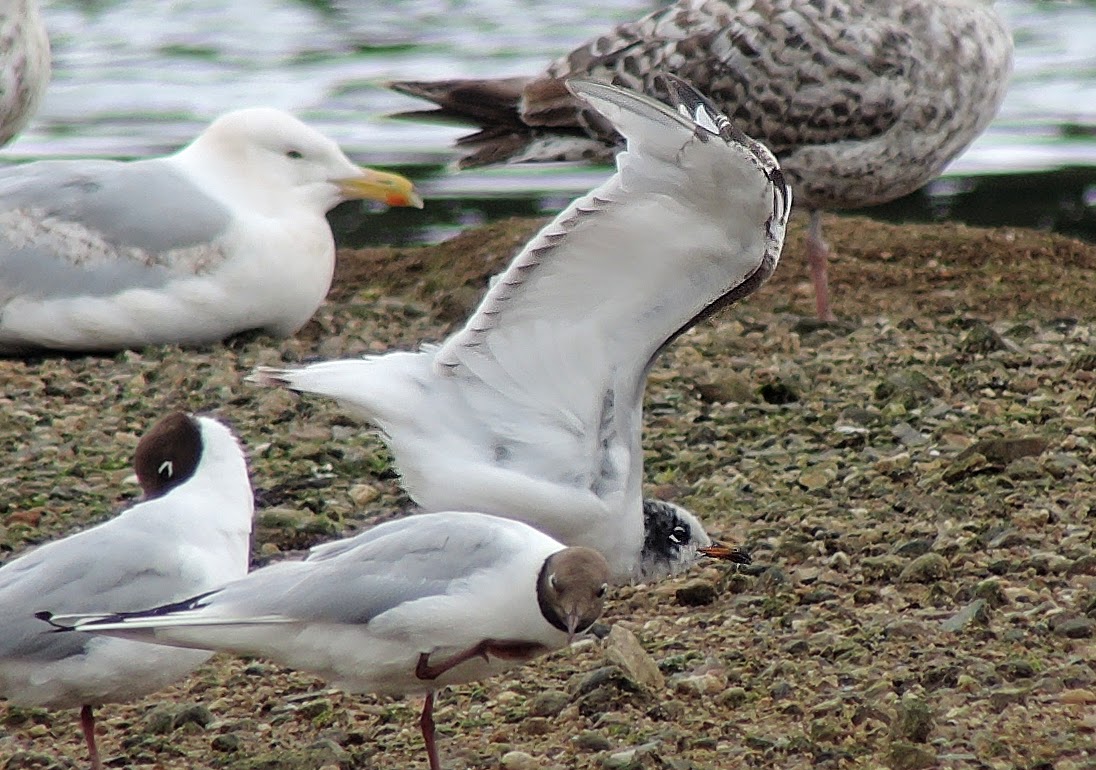 Posted by Laurie Allnatt at 20:08 No comments:

Whilst scanning the edges of the reeds this morning, I came across a juvenile Water Rail. It was adult sized so not a black ball of fluff. I think it's probably quite likely that it was born somewhere in the Passage House reed bed, but I suppose it's possible that it's an early migrant.

The highlight was probably an adult Little Ringed Plover on the spit. Other wader counts included 73 Curlew, a Whimbrel, a Redshank and five Common Sandpipers. Elsewhere, Robin found a Green Sandpiper, the first of the year.

Looking through the Black-headed Gulls, I found a darvic ringed bird which was initially too far away to read. Luckily, after keeping my eyes glued to it for half an hour while it slept, it flew fairly close and I was able to see that it was white 27J1.

Posted by Laurie Allnatt at 19:23 No comments:

Again, more birds are building up on the estuary during the start of the Autumn migration. I saw the first Common Sandpiper last Tuesday along with two Dunlin. Today there were six very mobile Common Sandpipers flying around Passage House. Other birds included two Redshank, 68 Curlew, a Little Grebe and 140 Black-headed Gulls, of which seven were juveniles. No Mediterranean Gulls though. Another family of Shelduck has appeared with seven very small ducklings. 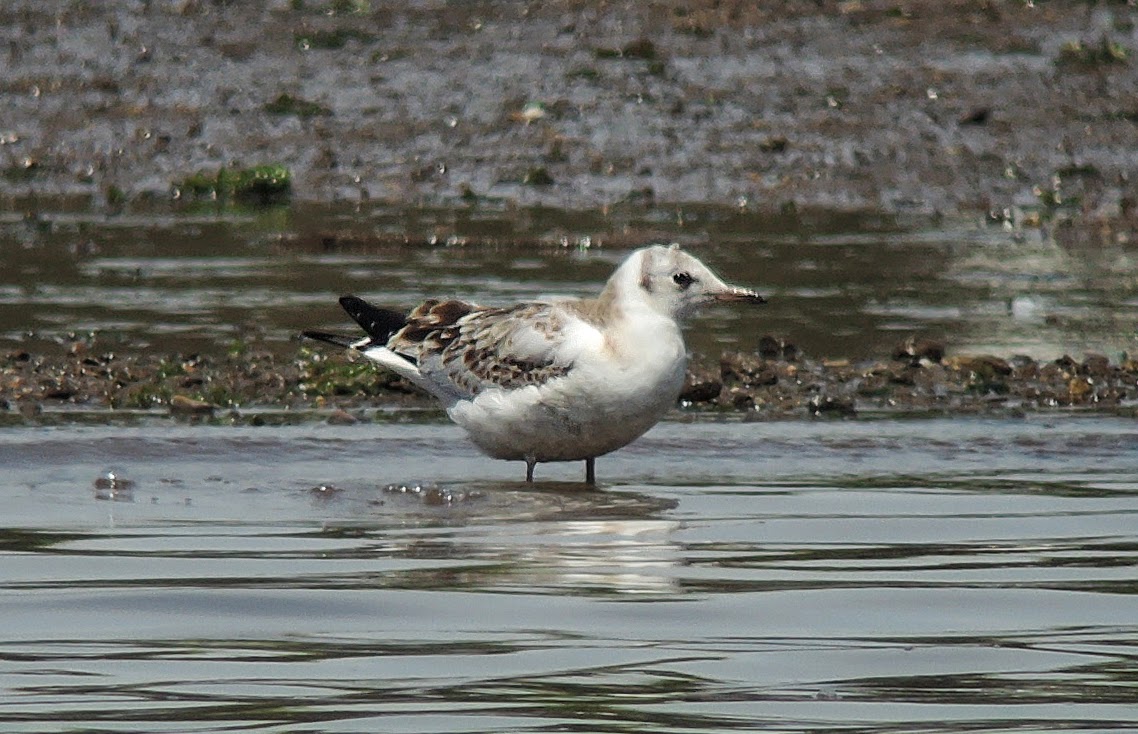 Posted by Laurie Allnatt at 16:34 No comments: