A tour of several sites around the estuary this morning began with a visit to Decoy Lake, which turned up adult and juvenile Great Crested Grebes and two Tufted Ducks. Next stop was Flow Point for the high tide roost; Oystercatchers (378) and Curlew (90+) were plentiful but numbers of other waders disappointing - 3 Greenshanks, 2 Common Sandpipers, 4 Ringed Plovers and a Dunlin (the latter two species were into double figures this time last year). Nine Turnstones were roosting on a covered boat at Polly Steps, Teignmouth, and single Wheatears were noted here and at Flow Point.

I ended up exploring the back lanes behind Shaldon, namely Commons Lane which rises up steeply from Ringmore and is lined with dense, species-rich hedgerows. No sooner had I parked up that a female/juvenile Redstart flew across the road; an overdue patch tick for me. The area looks good for warblers and other passerines during migration.

Yesterday late afternoon a dozen or so Sandwich Terns and a Mediterranean Gull were off Teignmouth seafront, where six Bottlenose Dolphins passed a short while before I arrived (thanks Ken). 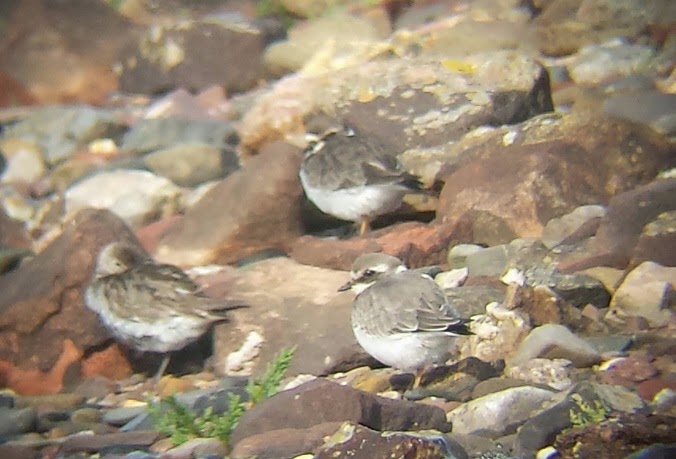 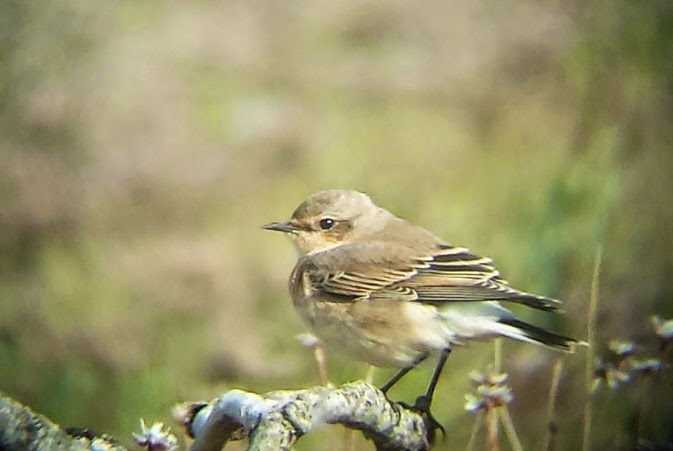 Ringed Plovers, Dunlin and Wheatear - Flow Point
Posted by Will Salmon at 15:44 No comments:

I managed a fairly short seawatch at Teignmouth this morning from 06:45-08:15. Despite the strengthening onshore breeze most birds were a very long way out, including good numbers of "commic" Terns which attracted the attention of three Arctic Skuas. Seven shearwater sp. bombed their way south, barely dots on the horizon, with only one coming close enough to be ID'd as a Manx. Passing somewhat closer to land were a juvenile Mediterranean Gull, two Common Scoters and four Sandwich Terns.
Posted by Will Salmon at 12:40 No comments:

Combined totals from Passage House and Flow Point this morning included 386 Oystercatchers, 105 Curlew, 6 Whimbrel, 5 Greenshanks, 7 Dunlin, 6 Ringed Plovers, 4 Common Sandpipers and the first Black-tailed Godwit of the autumn.
Posted by Will Salmon at 22:11 No comments:

Not a great deal of quality around the estuary on a gloriously sunny Thursday afternoon but numbers of certain waders are continuing to increase. A total of 280 Oystercatchers were strung out along the embankment east of Flow Point at high tide, a figure not far off the mid-winter average. The Curlew flock broke three figures with 106 at Passage House before some dispersed to Flow Point as the tide peaked, joined by 3 Whimbrel. Other counts included 8 Dunlin, just 4 Common Sandpipers, 2 Redshanks, 89 Little Egrets, 44 Mute Swans, 27 Shelducks, 25 Cormorants, two Sandwich Terns and singles of Great Crested and Little Grebe.

Earlier in the morning a brief look at the racecourse revealed a mixed flock of c.100 Swallows and House Martins, and two Common Sandpipers were under Town Quay Bridge.
Posted by Will Salmon at 11:29 No comments: