Two recent Red Kite over the patch - one flying east over Bishopsteignton at 5pm on 21st June with a second bird NE over Newton Abbot the next day - the latter at least in heavy wing moult.
Posted by Dawlish Warren at 16:49 No comments:

A very quick look offshore before 8pm saw a single Storm Petrel and 27 Manx Shearwater head south, along with a drake Mallard -  a rare bird at the eastern end of the patch the last couple of years.
Posted by Dawlish Warren at 01:21 No comments:

Seawatching from 18:45 to 20:30 was productive in strong southerly winds. Manx Shearwater passage (totalling 115+) remained steady for the whole watch, with the majority passing very close for Teignmouth standards. This boded well for my chances of seeing Storm Petrels, and sure enough, at 19:10, one flew south giving fairly good views. At 19:45, it or another flew quickly north at a much closer range, and hence I only managed to follow it for a few seconds. A flock of four Pomarine Skuas took off from the sea at 19:50, and remained in the area chasing Kittiwakes for the following 30 minutes. A small skua sp. also flew south along with 20+ Fulmar and 20+ Kittiwakes.

With the only birds of note at Passage House over at high tide being a brood of 10 newly fledged Shelduck, I thought I'd continue the recent theme of orchids, with these Bee and Pyramidal Orchids at Aller Brook LNR. 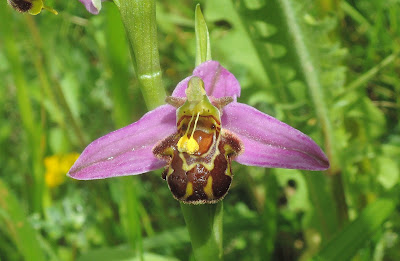 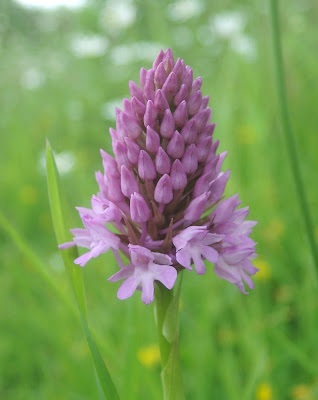 Posted by Laurie Allnatt at 20:03 No comments: