I had a five hour seawatch from Teignmouth today from 10:00 - 15:15. The conditions looked promising, however the forecast heavy rain didn't really materialize. I was joined by Robin for the first half.

Totals for the five hours with everything moving south were:

202+ Manx Shearwater - one of which flew in and loitered off the Yacht Club posing nicely for some photos.
7 Arctic Terns - one came really close and flew right over the base of the pier!
1 Common Tern
8 'commic' terns - too far out for me, but could also have been arctics.
c94 Whimbrel - two large flocks of 30 and 40.
2 Great Skuas - lingered offshore for a while. Kev paid a short visit to see them just as they moved off towards Hope's Nose.
1 Skua sp. - really distant. Wasn't an arctic, couldn't see any white in the primaries. Had some warm tones in, so could well have been a young Pomarine Skua.
1 Great Northern Diver
36 Fulmar
57 auk sp.
c43 Sandwich Terns
38 Kittiwake
1 Great Crested Grebe

I'm a bit annoyed I didn't see a Little Tern. One flew south past the Warren while I was at Teignmouth, and despite being informed about it, I didn't manage to pick it up.

As the title suggests, sitting on a camping stool for five hours isn't the comfiest of things, so after the five hours I gave up and went home.

Posted by Laurie Allnatt at 18:51 No comments:

A pair of Wheatears were hopping around on the spit this morning just before high tide, along with five very vocal Common Sandpipers, which at times broke out into song. As the tide rose, they relocated to the island roosts and I managed to get them all in the same photo.

Meanwhile, two pairs of Whimbrel flew in, circled a couple of times over Passage House, and flew off west towards Newton Abbot.

The Wheatears then flew across the estuary to the top of a dead tree near the water treatment works where they started flycatching.

The first Sedge Warbler of the year was singing from a reed bed at Hackney Marshes, and a total of six Reed Warblers were across the two sites. Surprisingly, Wheatear numbers on the racecourse have dropped to four after yesterday's high.
Posted by Laurie Allnatt at 17:54 No comments:

Brief Sanderling and many Wheatears

With the forecast for showers and a south-easterly breeze Laurie and I decided to give seawatching from Teignmouth a try this morning. It proved just about worth it, with the year's first Manx Shearwater heading south and 7 Common Scoters flying north along with single figure counts of auks, Kittiwakes, Gannets, Fulmars and Sandwich Terns. It became apparent after an hour that things weren't going to improve so we moved on to Flow Point, where the flock of migrant Whimbrel had increased to 9 and a Willow Warbler sang nearby. No sign of yesterday's Little Ringed Plover however.

We then had a look at Passage House from the car park, where a group of 5 Great Crested Grebes was slightly unseasonal and 4 Common Sandpipers foraged along the spit. Seemingly out of nowhere a Sanderling flew in and landed on the spit for a matter of seconds, before flying off down the estuary and out of sight. We parted ways shortly after but Laurie counted 16 Wheatears on the racecourse on his walk home, a very good count suggesting a decent overnight fall. 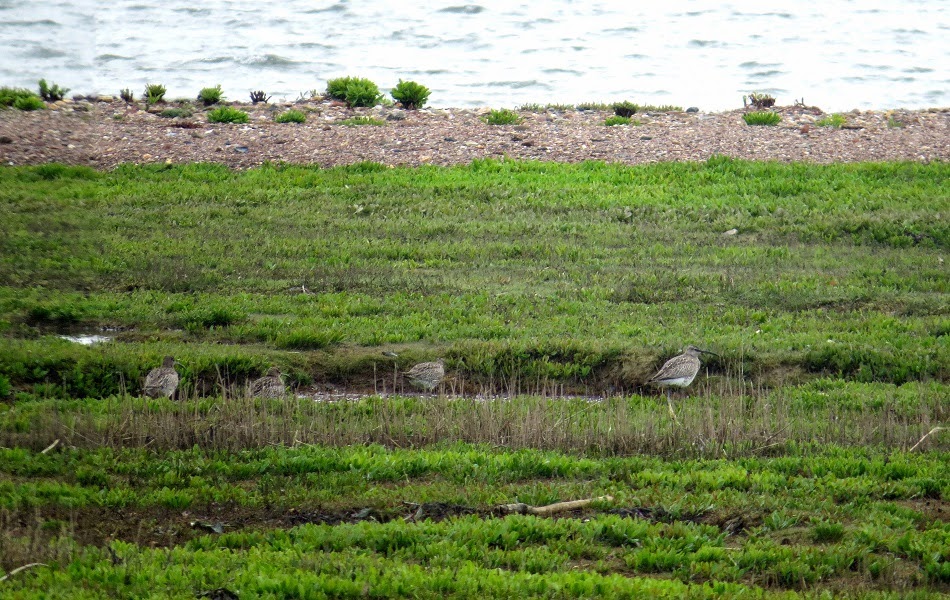 Whimbrel at Flow Point
Posted by Will Salmon at 19:06 No comments:

It was WeBS day today, so Will and I braved the weather, and were rewarded with some decent waders (for the Teign that is!). The majority of the action was at Flow Point (bad luck Kev) where as we arrived, a Little Ringed Plover flew past up the estuary calling, along with a Ringed Plover and a Dunlin. On the marsh on top of the point, there were seven Whimbrel, three Curlew, one each of Redshank and Greenshank, and a further three Dunlin. The Oystercatcher flock has decreased to seven, with two more Black-tailed Godwits roosting with them. Six Sandwich Terns were sitting on buoys in the estuary, and a few Swallows and a House Martin flew through.

As we walked around to the right to check for small waders feeding along the waters edge, we re-found the Little Ringed Plover. It's a different bird to the one at Passage House a few days ago, with slightly different markings and a weaker eye ring. I think the plumage also looks a little crisper. It then flew up, rapidly gaining height, and headed west, either flying elsewhere on the estuary or continuing it's migration. At a distance it could be mistaken for a hirundine, with a very fluttery flight. 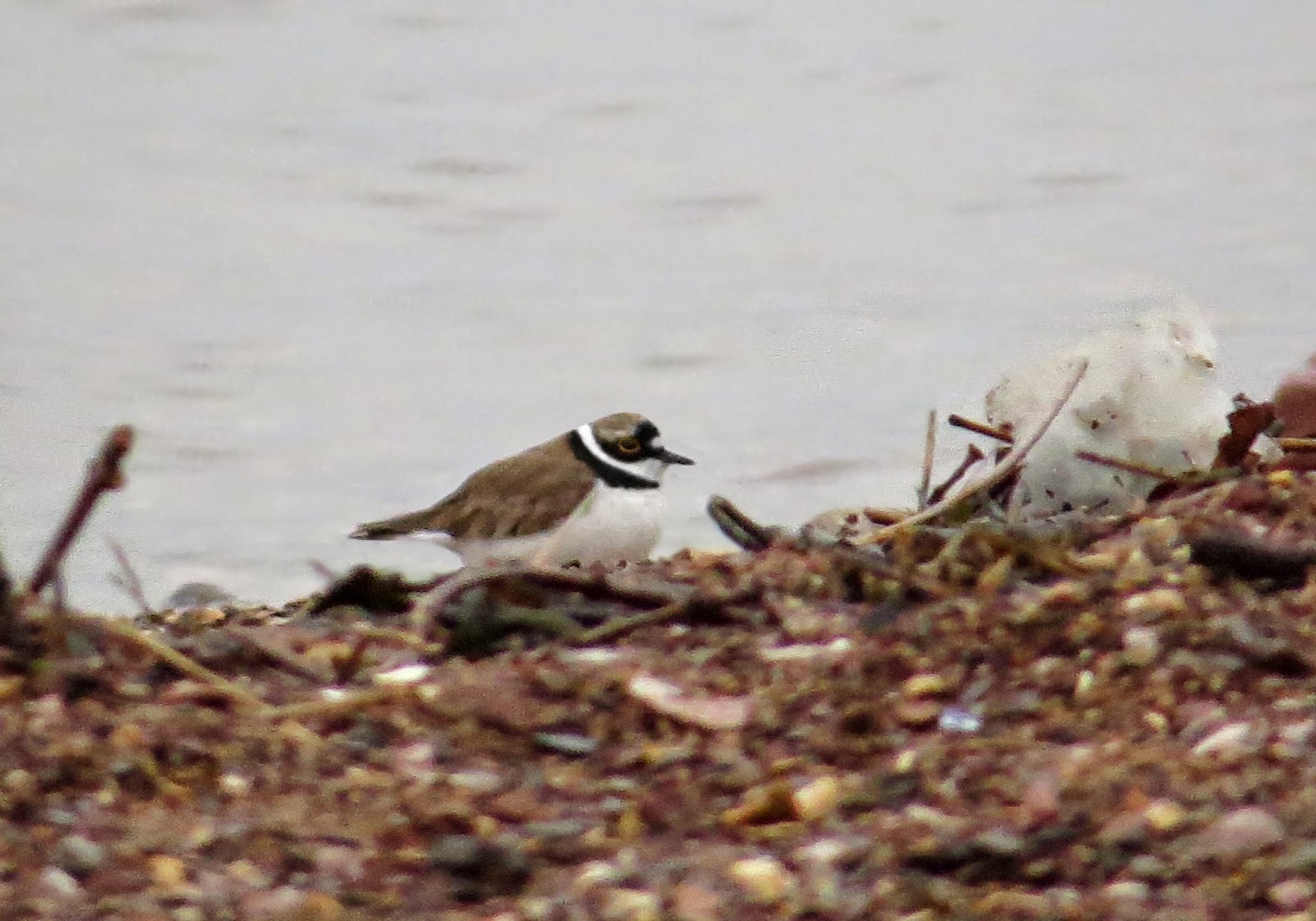 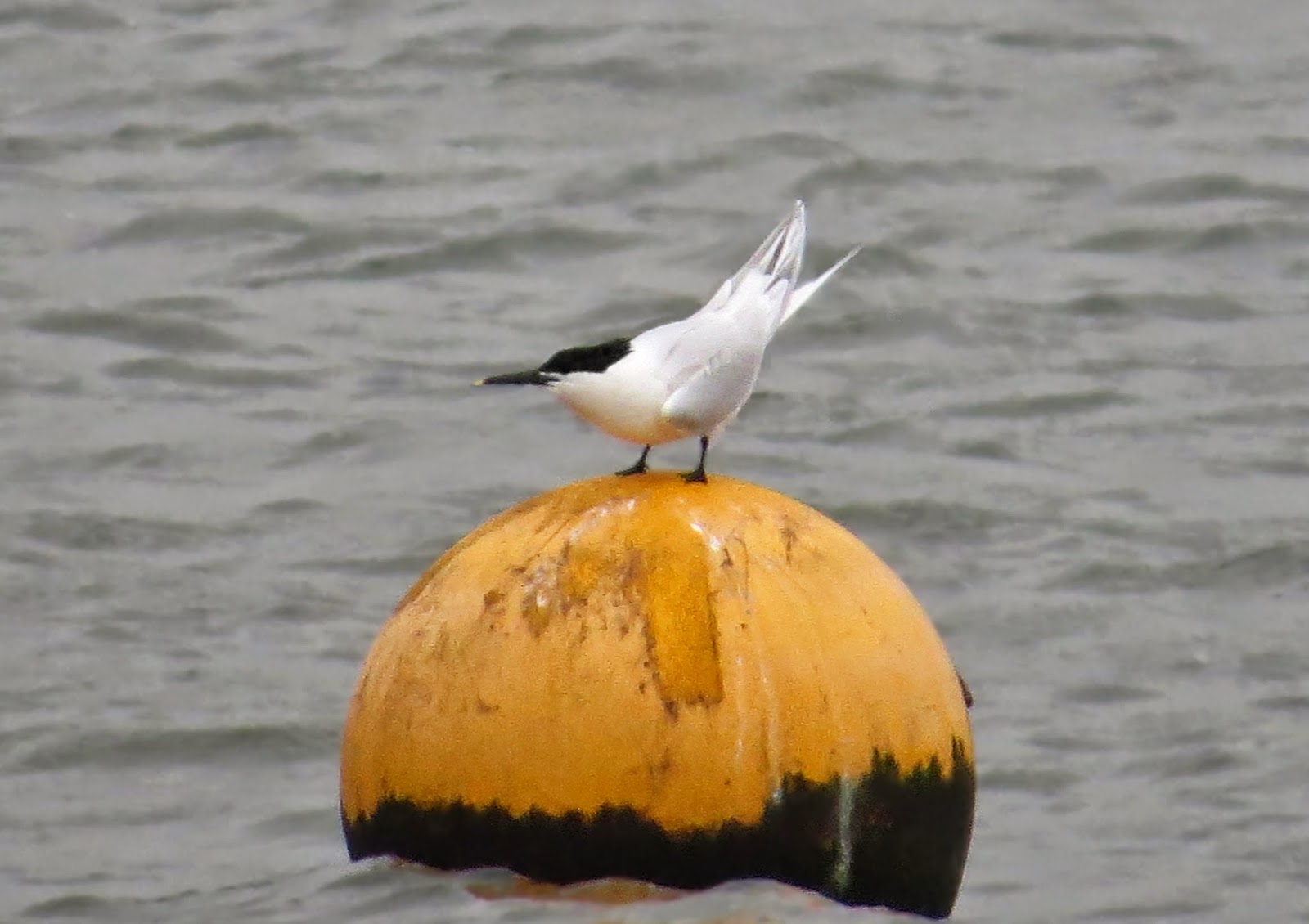 Not much change at Decoy, with five Tufted Ducks, about ten Swallows and a House Martin. No Arctic Terns unlike seemingly every body of water in the Midlands!
Posted by Laurie Allnatt at 20:01 No comments:

A quick look at Passage House on the morning high tide saw two Common Sandpiper still present with a flock of six Black-tailed Godwit and a Dunlin dropping in. Elsewhere a Willow Warber was singing away at Rackerhayes, a few Swallow were over the Racecourse and the Dipper continue to perform on the River Lemon.
Posted by Dawlish Warren at 17:26 No comments:

The first patch Reed Warbler of the year had arrived at Hackney Marshes this morning, chuntering away in the main reedbed and refusing to reveal itself. Blackcaps were abundant with 10+ around the marshes along with a handful of Chiffchaffs. A scan of the racecourse from the cycle path produced a Wheatear - the first on the racecourse this year I believe - 5+ Swallows and, totally unexpectedly, a male Black Redstart flitting between fenceposts on the far side near the grandstands. I sent a few texts and called Laurie who soon joined me and we obtained reasonable though distant views through increasing heat haze.

As the tide peaked we walked on towards Passage House, where our conversation was stopped short by a calling Whimbrel. It flew up from the edge of the reeds and begun to circle over the estuary, eventually drifting off towards Newton Abbot. Also two or three Common Sandpipers were flitting between the channels and one or two more Reed Warblers could just be heard above the breeze.

Late this afternoon I received a text from Kev saying that a Bee-eater had been seen flying over the Penn Inn roundabout towards Buckland! I was in the car coming back from Torquay, so I got dropped off and walked to Passage House taking in the racecourse on my way (I had planned to do this anyway because Kev had found a Little Ringed Plover earlier in the day). After walking through the tunnel under the railway, I had perhaps a greater surprise than the news of the Bee-eater; a Guillemot was sitting on the river within a few metres of me! I've never seen one west of Shaldon Bridge let alone this far up the river. I wonder what was going through it's mind! 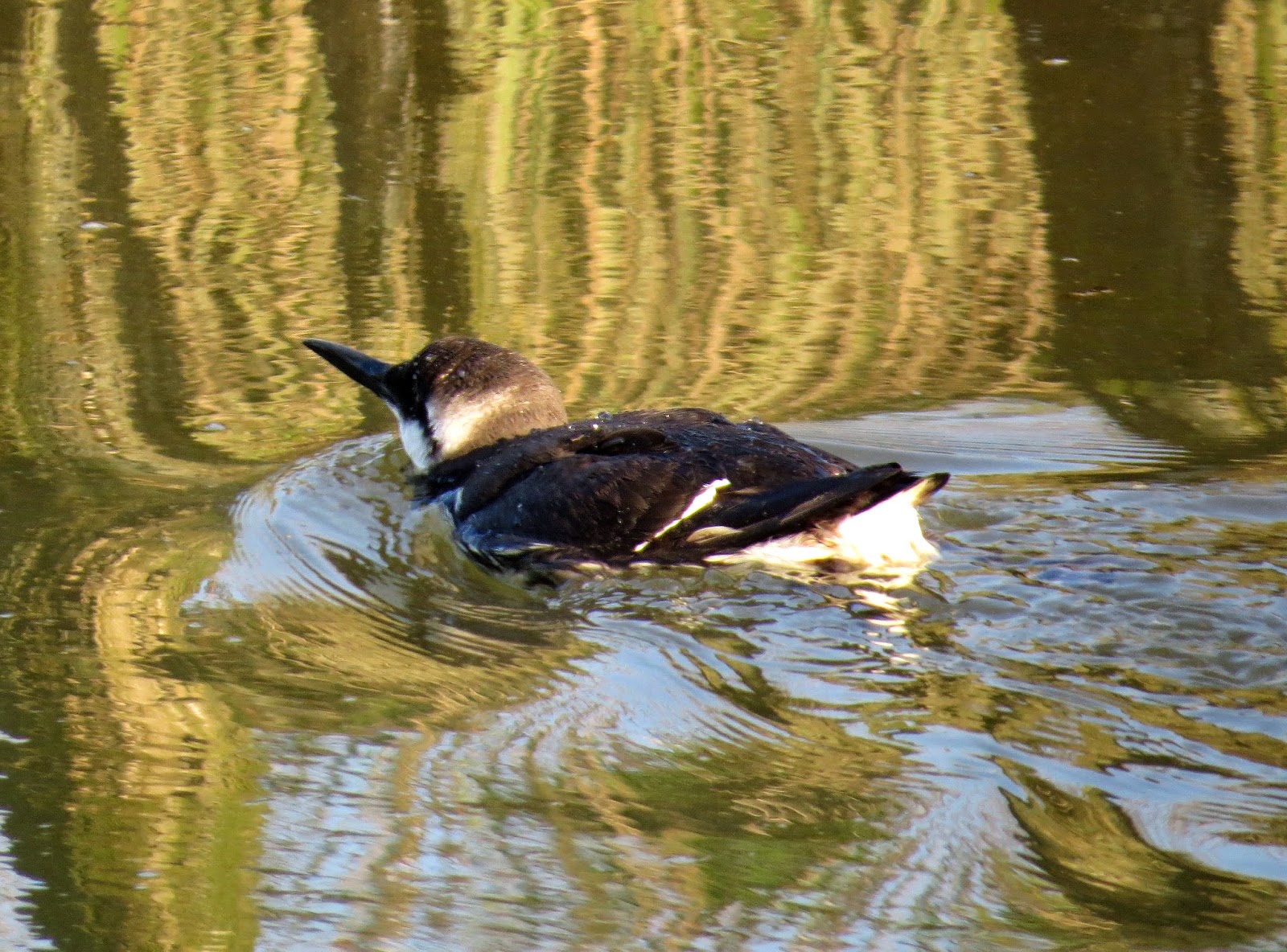 I phoned Kev about it, who was already at Netherton looking for the Bee-eater, and he was able to quickly drive down to Aller Brook bridge (see photo above) and connect with his 150th bird for Passage House!

On to Passage House, I quickly picked up the Little Ringed Plover on the spit, along with two Common Sandpipers.

Then I quickly started scanning the farmland south of the estuary for a flash of blue in the trees, but, like Kev who had gone back to searching the same area, didn't have any success. We did both however see the first House Martin of the year. Pretty scant reward for missing a Bee-eater though!
Posted by Laurie Allnatt at 21:03 2 comments:

Swallows over the racecourse

A few hours spent around Hackney Marshes and the racecourse this morning was fairly uneventful but pleasant nonetheless. Five Swallows were hawking for insects over the racecourse, where a male Kestrel flushed a rather late Snipe and two Skylarks were in full song. Warblers at the marshes included seven Chiffchaffs, six Blackcaps and a Willow Warbler (no Reed or Sedge Warblers yet) and two male Reed Buntings were holding territory. Overhead a Sparrowhawk caused brief panic amongst the songbirds and two Ravens were soaring on thermals.
Posted by Will Salmon at 13:14 No comments:

On Wednesday, there were 11 Tufted Duck on Decoy. However, about a month ago there were none at all. Since then though, I've made counts of four, five and seven, so I expect these are birds stopping off on migration.

Today, there was one singing Willow Warbler in Hackney Marshes, half a dozen hirundines in the distance above Rackerhayes, and still absolutely nothing in the way of birds on the racecourse, however there was one Brimstone butterfly which was nice.

At Passage House there were 20 Redshank, two Greenshank, three Common Sandpipers and a Ringed Plover.

Posted by Laurie Allnatt at 20:33 No comments:

I paid my first visit of the year to Bundle Head this morning in the hope that the forecast mist and fog would produce some grounded migrants. Annoyingly though, the fog was all low level and didn't cover the headland.

Totals were 6 Blackcap, 15 Chiffchaff, 5 Goldcrest and a single singing Willow Warbler, obviously a new arrival with it perched in a tree growing out the side of the cliff.

A scan of the sea with just bins produced very little in the way of numbers, with singles of Great Crested Grebe, Red-breasted Merganser, Guillemot and Razorbill. Two groups of Oystercatcher totaling c30 birds flew in from the north and made their way into the Teign. I wonder how much exchange their is between the Exe and Teign?

Posted by Laurie Allnatt at 20:47 No comments: