A fantastic spring day was highlighted by the first Willow Warbler of the year along the path on the south side of the racecourse. Also lots of Chiffchaff in song, and at Passage House at low tide there was a pair of Stock Dove.

With also seeing my first Orange-tip butterfly of the year, we can definitely say spring has arrived. 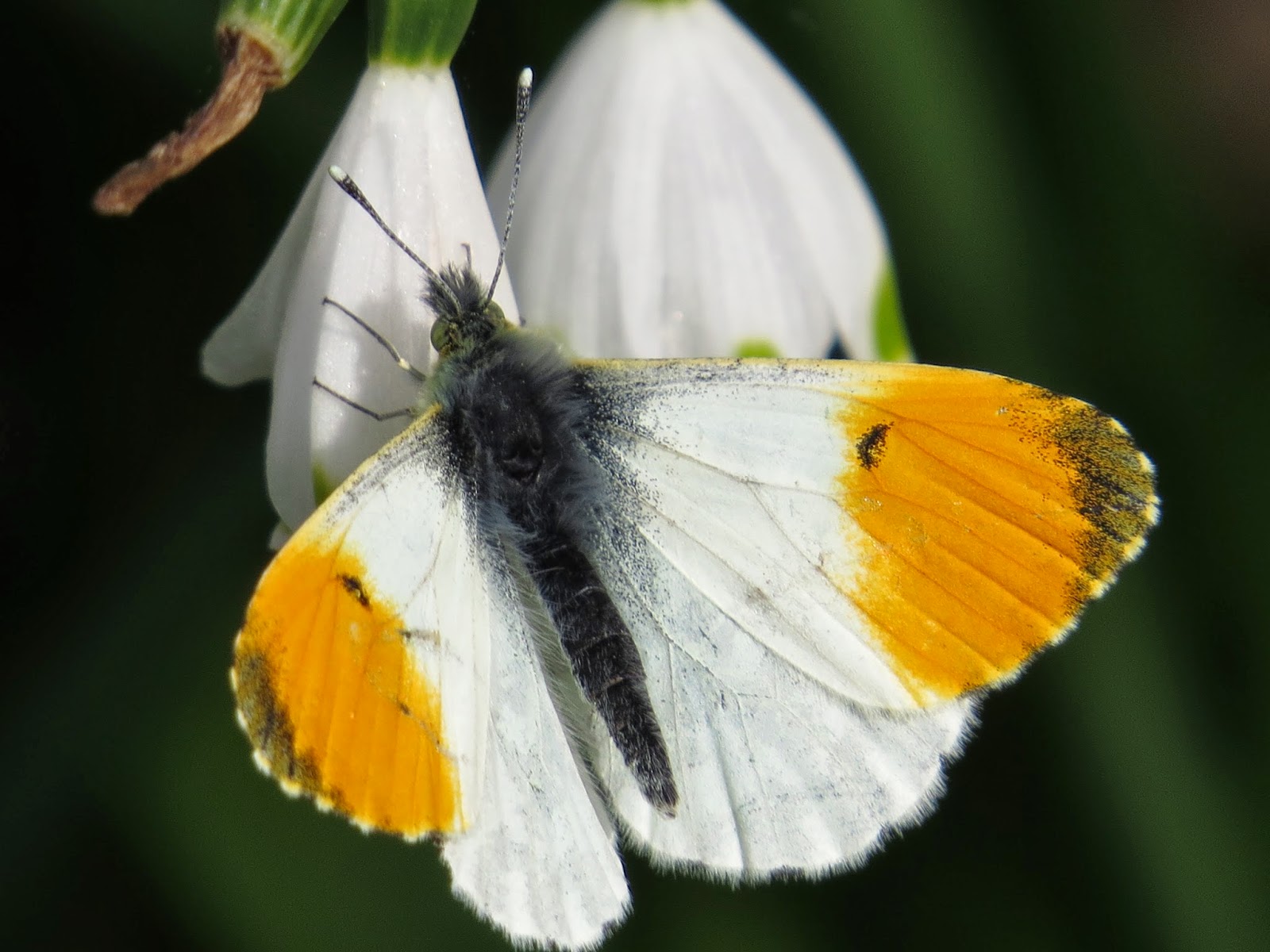 And here's a picture of a Dipper on the River Lemon. 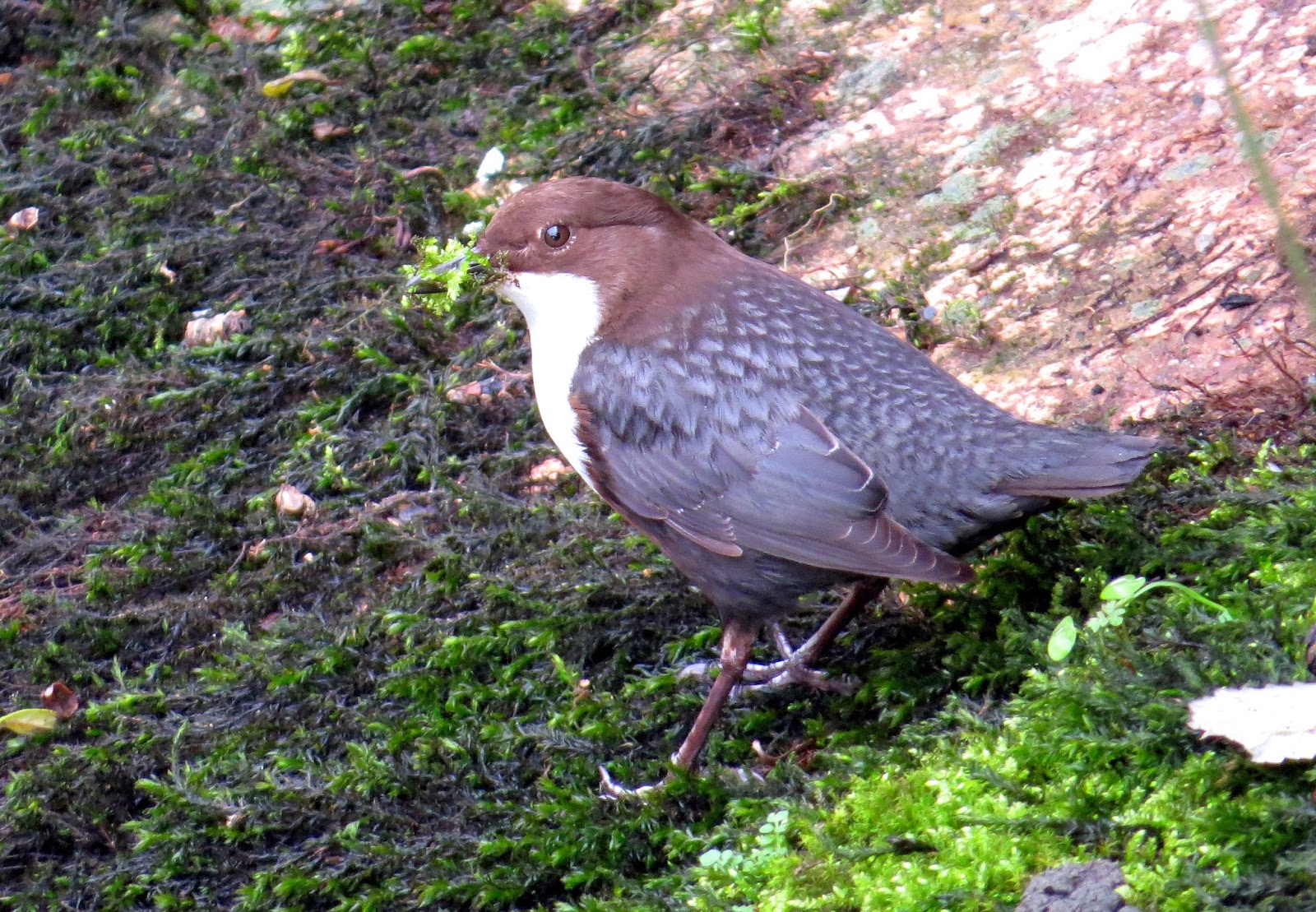 Posted by Laurie Allnatt at 18:33 No comments: 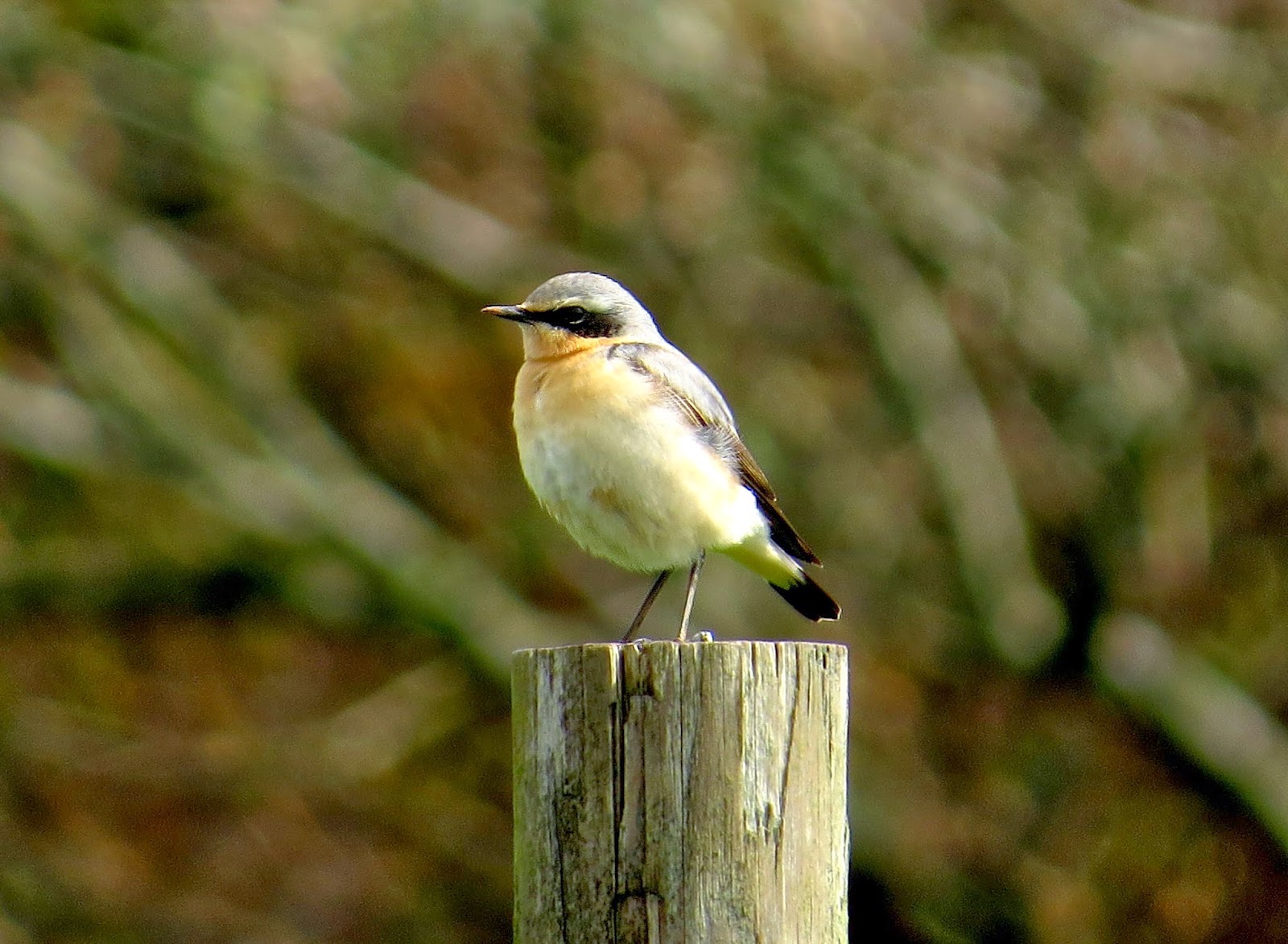 Mark Bailey reports a Dipper on the River Lemon near Albany Street in Newton Abbot which has been there for a while.
Posted by Laurie Allnatt at 18:14 No comments:

A day off work and a chance to spend most of the day birding around the Teign. I started with an early morning walk from The Ness to Bundle Head, where five Chiffchaffs and a Blackcap were in song and a Buzzard drifted high south mobbed by gulls. With little else in the bushes or overhead I didn't linger for long and decided to head to the fields south of Bishopsteignton, where I finally saw my first patch Stock Dove of the year and a scan of the estuary produced a good count of 21 Red-breasted Mergansers.

Onto Passage House, which I viewed from the bottom of Hackney Lane. Surprisingly, Greenshanks outnumbered Redshanks by 10 to 7, and Curlew numbers were down to just 39. Twenty Little Egrets were feeding along the edge of the rising tide with four more nearby, and two Common Sandpipers flew upriver. Next stop was Flow Point, where 8 Teal and 3 Snipe were on the lagoon behind the railway and 58 Oystercatchers roosted on the edge of the saltmarsh. A brief look around Polly Steps, Teignmouth produced 8 Turnstones.

In increasingly wet and blustery conditions early afternoon, I called into Decoy Lake which held 5 Great Crested Grebes and 7 Tufted Ducks but little else of note. After stopping for petrol at Tesco I had a glance through the gates into Rackerhayes where half a dozen Sand Martins were feeding over the nearest pond. Lastly, seawatching from Teignmouth from 15:30 until 16:10 produced 5 Sandwich Terns, a Red-throated Diver and 8 Fulmars all heading south.
Posted by Will Salmon at 18:09 No comments:

An early morning glance at the Salty saw an adult Glaucous Gull sat with a handful of Herring Gull until the rising tide pushed it off at 07.15. Perhaps the same individual as in early Feb? The bird circled around a few times before heading offshore and flying south. Also around the Salty seven displaying Red-breasted Merganser.

Yesterday 30 Sand Martin and a Swallow were at Rackerhayes, the first records of the year.

Posted by Dawlish Warren at 22:04 No comments:

A walk around Hackney Marshes on Saturday morning revealed three singing Chiffchaffs and two singing male Reed Buntings. No Wheatears on the racecourse yet, though a small increase in Meadow Pipit numbers indicated some evidence of migrant activity. At Passage House a scan of the gulls produced a good count of 10 Lesser Black-backed Gulls, and waders included singles of Snipe, Greenshank and Common Sandpiper.
Posted by Will Salmon at 08:13 No comments:

...and little to report with no Sand Martin or even a repeat of February's Sandwich Tern. Three Common Sandpiper at Passage House on Friday and a Tawny Owl at the Ness, Shaldon this evening the only notable sightings of late, the latter a rather tardy year tick.

Posted by Dawlish Warren at 20:27 No comments:

A look offshore from Teignmouth early evening revealed quite a few gulls including a fine summer-plumaged adult Mediterranean Gull. It always remained fairly distant and eventually drifted off south. Also a male Red-breasted Merganser flew in from the north, suggesting it was one of the Exe birds dispersing.

Yesterday afternoon there were singles of Great Northern Diver, Great Crested Grebe and Razorbill offshore and 7 Red-breasted Mergansers in the estuary. At Decoy Lake two Great Crested Grebes were present but keeping their distance from each other, with the male Scaup, male Gadwall, 15 Tufted Ducks and 3 Lesser Black-backed Gulls also in attendance. The female type Black Redstart continues to show on occasion in the Tarrs Lane/Primrose Close area of Kingsteignton.
Posted by Will Salmon at 21:59 No comments:

Seawatching from Teignmouth this morning between 07:50 and 09:10 was quite productive for divers, with five Great Northern Divers on the water and at least four Red-throated Divers heading south. One of the GNDs was consuming a crab right in front of the yacht club and gave great views. Also noted were a Great Crested Grebe, 4 Razorbills, 2 Guillemots, 10+ auk sp. and 25 Common Scoters in flocks of 9 and 16. A brief look up the estuary from Polly Steps revealed 14 Red-breasted Mergansers.

Yesterday morning at Decoy Country Park two vocal Lesser Black-backed Gulls were presumed recently arrived migrants. Tufted Duck numbers on the lake had dwindled to just 16, but the male Scaup and male Gadwall extend their stay into a fifth calendar month.
Posted by Will Salmon at 17:35 No comments: