On Wednesday there were five Willow Warblers and two Mandarins at Rackerhayes along with first broods of Mallard and Coot, and on Thursday an Osprey flew over Kingsteignton.

The first two Sandwich Tern of the year were fishing just inland of Shaldon bridge on Monday afternoon, with at least 13 off the seafront later on.

Posted by Dawlish Warren at 00:14 No comments:

Very little of note around Hackney Marshes and the racecourse this morning, although this was hardly surprising at the latter since preparations were underway for the first race meeting of the year. A Water Rail showed well from the Hackney Marshes viewing screen and there were numerous territorial Chiffchaffs and Blackcaps. Onto Rackerhayes for the first time since pre-lockdown three months ago, where a large flock of Sand Martins (c.100) were feeding low over the water, joined by two Swallows and a House Martin. Around the lakes three Willow Warblers were singing away from their namesake trees and two Roe Deer foraged in an adjacent meadow. 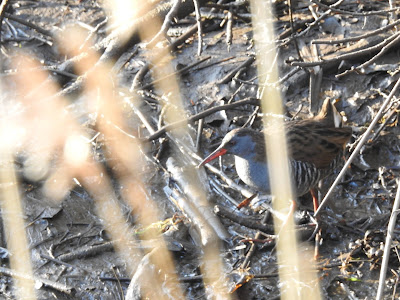 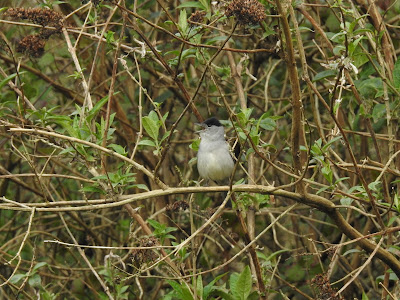 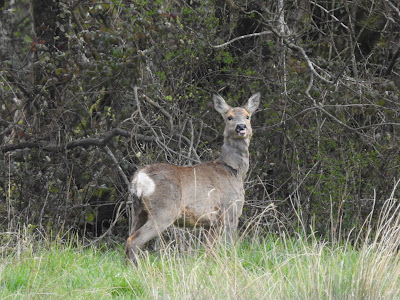 A few years ago I could never have imagined writing a blog post with this title, but with birds starting to wander from the Isle of Wight release scheme and satellite tracking showing that one had previously crossed patch airspace, the prospect of seeing a White-tailed Eagle around the Teign had actually become a realistic scenario. After the bird first seen near Exmouth on Friday had flown inland from Dawlish late this morning, I headed out to Flow Point to see if I could intercept its path. As I got in the car just after 11:00 the phone rang; Laurie had picked up the White-tailed Eagle from his house, soaring over Netherton/ Combeinteignthead! A quick change of plan and I soon located the bird from the Passage House car park, and watched it track slowly westwards towards Buckland/Newton Abbot. My camera chose the perfect moment to play up so I only managed a dreadful phonescoped shot, although the eagle was always high and never particularly close. Laurie soon arrived along with several other passing birders who got onto it, although by this time the eagle was over Newton Abbot and moving ever further away. It was eventually lost in the direction of Abbotskerswell/Kingskerswell at 11:40.

Certainly a memorable day and hopefully just the first of many local sightings of this magnificent raptor!

A fair variety of birds around the patch this morning that was typical of the changing seasons. A look off Teignmouth first thing produced little other than two Great Northern Divers and the unusual sight of two Carrion Crows sat together on a buoy. Onto Bundle Head, where there were a few grounded migrants including three Chiffchaffs, a Blackcap and a Firecrest, with a handful of Chaffinches, Linnets and Meadow Pipits moving north overhead. A scan of the sea around the Labrador Bay mussel farm revealed just a Great Crested Grebe and weirdly a Canada Goose, with six Mute Swans flying south (around this time last year was the famous trio of Surf Scoter, Velvet Scoter and Long-tailed Duck!). A pod of 18 Common Dolphins continued the good run of sightings in Babbacombe Bay this winter.

I arrived at Passage House around the (neap) high tide where there were decent numbers of waders for late March including 31 Redshanks, seven Greenshanks, 28 Curlew and four Snipe, plus 12 Little Egrets. Another 10 Curlew and eight Little Egrets were roosting on Flow Point, and a total of 25 Red-breasted Mergansers were scattered about the estuary. The last stop was Teigngrace, where surprisingly there were no Sand Martins but the Bar-headed Goose and its companion the Swan Goose x Greylag hybrid were in with the Canada Geese after having made an appearance on the racecourse yesterday.

All photos by Alan Ford

An early Whimbrel didn't whistle its way over Teignmouth overnight on 25/26th February. It was actually a Little Grebe, far rarer in Teignmouth. The date was a strong clue, and Little Grebe were recorded overhead elsewhere in Devon that night. Perhaps not the usual confusion species but more information on the Sound Approach website https://soundapproach.co.uk/little-grebe/

Posted by Dawlish Warren at 23:06 No comments:

This Shag has, unusually, been fishing the river at Passage House for the last month. They are normally only seen in the lower half of the estuary.

The Grey Plover was still around the roost islands at Passage House today, with 40+ Redshanks, 12 Dunlin, five Avocets, nine Lapwing, 82 Curlew, four Greenshanks, a Common Sandpiper, and two Kingfishers, one being at Hackney Marshes. A total of 45 Lesser Black-backed Gulls and 12 Common Gulls were in the gull flock. It felt distinctly spring-like with Skylarks singing over the racecourse and waking up to the sound of my first singing Chiffchaff of the year.

Posted by Laurie Allnatt at 19:22 No comments:

A few recent records from Teignmouth include up to six Great Northern Diver offshore, a couple of adult Mediterranean Gull, three Knot on the 12th and a vocal Black-tailed Godwit over on the night of the 15th. Continuing the scarce wader theme a Grey Plover was at Passage House on 18th.

Posted by Dawlish Warren at 20:33 No comments:

I braved the bitterly cold weather this afternoon, with the temperature just above freezing, and the easterly wind gusting over 50mph. A very good count of 86 Dunlin were foraging along the northern side of the estuary just to the east of Passage House; clearly displaced birds escaping freezing conditions further east. Ten Avocets were still around with six Wigeon. A count of 28 Red-breasted Mergansers was a surprisingly high count given the choppy conditions. I think they must have been seeking the comparatively calm waters of the western end of the estuary. Six Golden Plovers then suddenly appeared on the mudflats, which I'm sure must have flown in as I was scanning elsewhere. Surprisingly, given the displacement of other species, there were still only three Lapwing present. In the gull flock, there were approximately ten Lesser Black-backed Gulls and 20 Common Gulls. Kev has had 2-3000 gulls on The Salty the last few days, and reports a Mediterranean Gull today. A Black Redstart was also around his house yesterday.

On another check of an empty Decoy Lake, a single Lesser Redpoll flew over calling before landing nearby in a silver birch.

Posted by Laurie Allnatt at 16:24 No comments: