The weather looked good for a seawatch today, so I got the train to Teignmouth and started watching from 2 – 5pm.

My target bird was the Balearic Shearwater, and as the title suggests, I saw some. I had to wait 55 minutes for the first one to go through. At 15:42 two went through together, shortly followed by another. Interestingly, some were seen at 15:35 passing Exmouth (time from birdguides) giving an idea of how quick they travel if they were the same birds. After this, the passage dried up a bit, with only a small trickle of Manxies going south. When the fourth Balearic went through, the sun was shining, and illuminating the underside making it look golden.

Other birds included:
120 Manx Shearwaters including 40 distant ones on the horizon which I assumed were all Manxies
1 Arctic Skua + another distant probable (Edit: Seeing on the Dawlish Warren website that they had a Long-tailed Skua south just after 3pm, and I saw my distant probable Arctic at 3:10pm which makes me think that it could possibly have been the Long-tailed Skua! It was very distant but I could just about discern a bit of pale on the under body and possibly the merest suggestion of a little bit of white on the primaries. It was a bit bigger than a manx but I wish I wrote more down about the flight style. When I first picked it up it looked like a weird manx (slightly shearing flight), but when I zoomed in, I could see it was a skua. The wing beats were fairly light, but it seemed to fly with some purpose. I just wish it was a bit closer - I might have just been able to identify it, and it would have been a lifer!)
97 Sandwich Terns
13 Common Scoter (flocks of 2 and 11)
10 Kittiwake
160+ Gannet
2 Fulmar

The biggest seawatching lesson I learnt today was to always where waterproof trousers rather than shorts if it’s forecast to rain. Even though it’s summer, it still gets really cold!

Posted by Laurie Allnatt at 19:33 No comments:

At Passage House this evening I counted a maximum of 17 Common Sandpipers, though no doubt more were hiding in the channels. Also two Mediterranean Gulls, a moulting adult and a second-summer, were circling overhead before flying towards the racecourse and, unusually, a Stock Dove was on the spit.
Posted by Will Salmon at 22:48 No comments:

I spent ages today trying to get a really good count of Common Sandpipers today, as on arrival I could see that there were a lot around. I had a look at the spit and counted 12 of them in one field of view! It was crawling in them! After a good look around and a walk up river I came up with a grand total of 16. I’m sure I must have missed some, either feeding in the muddy channels and creeks out of view, or lower down the estuary.

The Greenshank was still around and five Dunlin were feeding on the mudflats. From the train yesterday I counted six Dunlin which were flushed from their high tide roost on the estuary wall by the train.
Posted by Laurie Allnatt at 14:25 No comments:

A Greenshank was off Passage House this evening on the falling tide along with 6 Common Sandpipers. 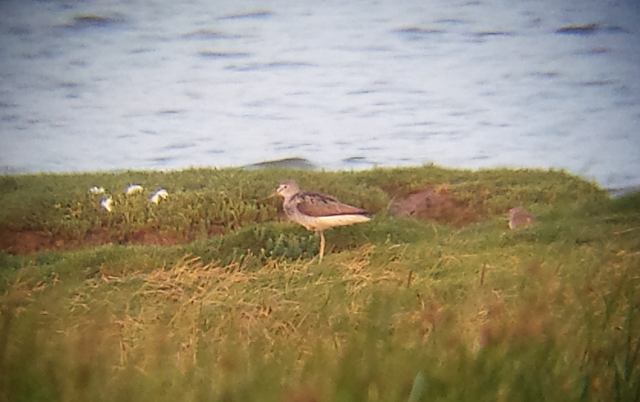 I was joined by Will today on the estuary today with us both having the intention of finding a juv Yellow-legged Gull. There were around 15 juv Herring Gulls but no YLGs. While looking though, Will found this Gull...

Pretty weird! It’s done well to survive so long. Doing a google search it seems like this type of deformity isn’t too unusual.

There was also an adult Med Gull on the estuary which was wearing a white darvic ring. Annoyingly it never came close enough to read it. 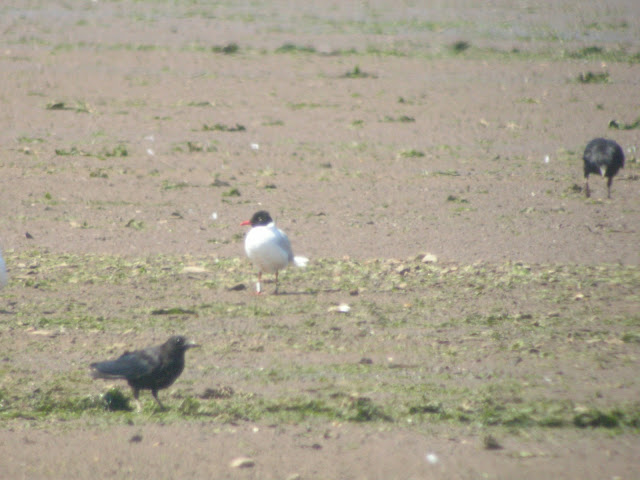 The only other gull of note was a Common Gull.

Whimbrel numbers are now up to nine, Curlew at c90 and the Blackwit is still knocking around. We got brief views of Dunlin that flew in and touched down on the water for a couple of seconds, then realised it didn’t like our patch and flew off.
Posted by Laurie Allnatt at 20:51 No comments:

On my walk down to the estuary today I met a local man walking his dog along the river. He had bins and a notebook packed with bird sightings from the local area, so this made me trust what he said. So when he told me he had seen a CATTLE EGRET last Thursday, I believed him. He saw it on the edge of the river near Aller Brook and described it as a small hunched white egret with an orange beak – sounds good to me! Annoyed I missed it, but it’s still a reminder to check EVERY egret you see!

When I got onto the estuary, I did a check of the gulls – nothing of interest at all. Then counted eight Whimbrel, a very good count for this time of year, and found the Black-tailed Godwit. Then I remembered the three Dunlin I saw yesterday and tried to find them. It didn’t take long. Then I realised that they had been joined by a fourth small sandpiper. A Sanderling!! In summer plumage as well! A VERY good record for Passage House. I quickly took a distant record shot and sent texts out (unfortunately not to Kev who still needed it for Passage House as I didn’t have his phone number!). 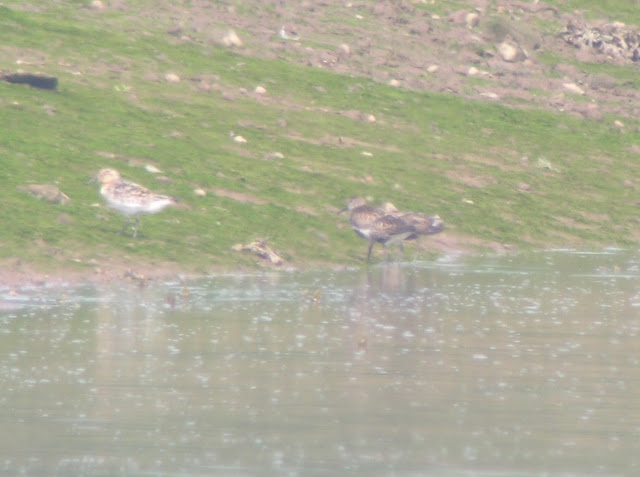 I then ran as fast as the slippery ground would allow around to the other side to get closer. On my way I found this...

I quickly re-found the group, which had gained an extra Dunlin! Will arrived soon after, after a mini 30 minute twitch, and we both admired the bird. Hopefully it will stay for a while and Kev will get it on his list.

Definitely gives me hope for Curlew Sand and Little Stint in a few weeks time.

Here are some photos taken by Tom Whiley yesterday...

The Common Sand had an injured leg which the local Sparrowhawk noticed, and it attempted to catch it in mid air!

Posted by Laurie Allnatt at 17:17 No comments:

Couldn’t think of a good title today so had to settle for this boring one!

Let’s start off with this...

There’s never that many on the Teign so it was nice to see this beauty today.

The was one adult Med Gull on arrival and another 2s at the other end of the estuary seen by Tom W who I bumped into.

Will also saw a Cuckoo (year tick!) yesterday at Netherton. I’ll delete this if you want to do a post about it Will.
Posted by Laurie Allnatt at 19:41 No comments:

I saw this bird ages ago on the 17th Feb  2013. Looking at it now it’s actually quite easy to work out the code, but at the time, for some reason, I gave up!

Well yesterday I showed it to Lee C and he steered me in the right direction.

It's actually a gull that he's seen before at the warren last autumn (23rd Sept 2012). It was ringed on Guernsey as a chick in 2009 and appeared to spend its first year at Portland/Radipole. Lee saw it next on the 2012 autumn passage, and then I got it on its way back up again on its way back to Radipole Lake.

There were quite a few GBBGs on the estuary today with 76, vast majority of which were adults. The c340 Black-headed Gulls on the estuary contained either one or two adult Meds. One was a different bird than the ones seen on Sunday (not fully hooded). On my final scan I saw one about a kilometre away and so couldn’t work out if it was the same bird or not.

I got a good low tide count of 77 Curlew and our first four returning Whimbrel. The first returning Dunlin was on the spit at Passage House and five Common Sands were on site. Now 49 Little Egret and there seems to be yet another brood of Shelduck! Eight of them!

Here’s a slightly closer shot of the quiz picture. The adult Med is obvious but is this the other one you found Steve? Looks like a BHG to me. 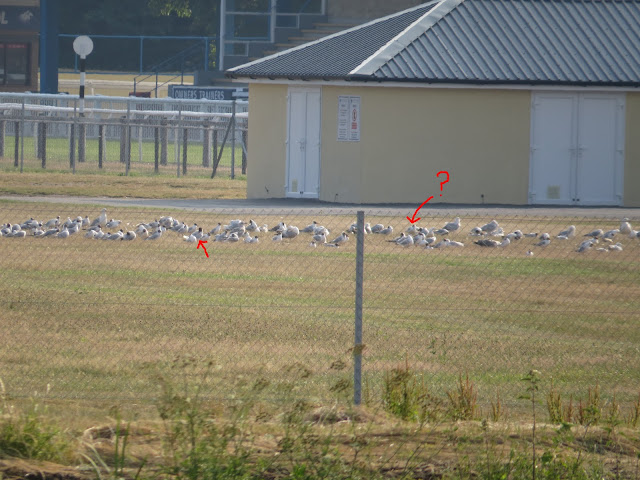 Med Gulls and Much More

Lets start off with a little QUIZ:
Spot the Med...

Go on, click on the image and try to find it. Leave a comment describing its position and you will be the winner! Don’t be shy!

Now some counts from the estuary:
Curlews have been increasing every day over the last couple of weeks and are now up to c73. I met Will at Passage yesterday evening and managed to get this count as they left their roost as the tide dropped.
Redshank numbers have doubled to two! and Little Egrets are now up to 38+.
The first Med Gulls of the summer have appeared over the last couple of days with this adult over on Saturday and this first summer at Passage yesterday. 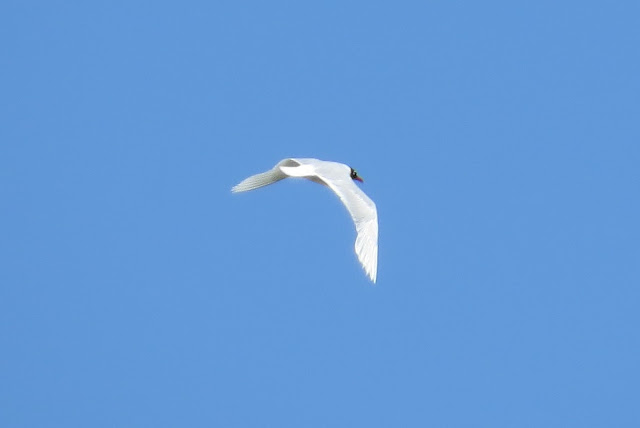 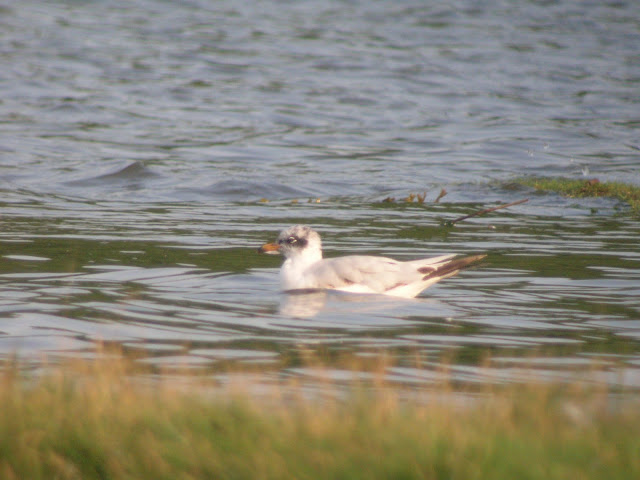 We also had a probable fly over but the light was fading and by the time we got on to it, it was flying away from us, but it did have pale underwings and when it turned its head I could see a chunky beak.

The quiz picture shows a group of c220 Black-headed Gulls (including 7 juvs) roosting on the racecourse yesterday.  They were all panting away in the extreme heat, I don’t know why they weren’t sitting on the cool water of the estuary.
So all together, there were three different Meds on site yesterday and almost a fourth which turned out to be a sleeping Shelduck! (nice one Will ;)) It did look remarkably like a Med though.

Thinking of Shelducks, there now seems to be another brood of five. So now there are four broods of 2, 4, 5, and 7. The brood of seven are now pretty much adult sized.

Now on to small waders. There have been four Common Sandpipers around Passage for a week now with all of them feeding on the spit with c12 Pied Wags including a few juvs yesterday evening. On Saturday evening Will saw two LRPs at Passage. The first returning passage.

I’ve seen this Little Grebe over the last couple of weeks. No juvs yet though. 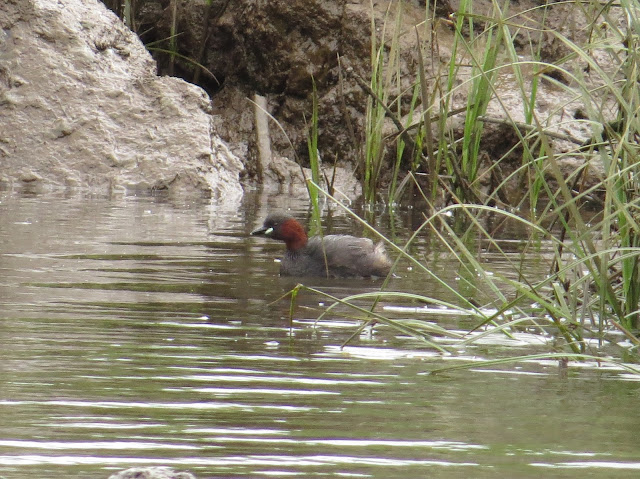 On a non-birding note, on my walk down yesterday, I saw this…!

At first I thought it was an algal bloom, but the colour only occupied about 40 metres of the river and on my walk back, it had shifted down to where the new bridge is. Perhaps someone tipped a massive bucket of neon green paint in the river?! I hope it doesn’t affect the estuarine ecosystem too much!

Anyway, that was a long post! Hopefully you’ve all managed it to the end, and don’t forget the quiz!
Posted by Laurie Allnatt at 11:10 5 comments: