Although sightings are on the increase a Firecrest will always brighten any day's birding. At least two were around Shaldon this afternoon, one in the Holm Oaks on the Ness and a second in vegetation above Ness Beach. Chiffchaffs were also in both locations and offshore at least 90 Common Scoter.
Posted by Dawlish Warren at 21:21 No comments:

The standout bird of this morning's survey was a female Goosander that was loafing about Passage House for the hour that I was there; the first on patch since 2014. An impressive total of 51 Snipe emerged from the reeds to forage as the tide dropped, and two Bar-tailed Godwits had joined up with the 90-strong Curlew flock. Other totals from the length of the estuary included 386 Oystercatchers, 81 Redshanks, four Greenshanks, 36 Dunlin, four Ringed Plovers, three Common Sandpipers, two Turnstones, 14 Little Egrets, 21 Mute Swans, 18 Shelducks, 15 Red-breasted Mergansers, two Wigeon, six Little Grebes and a Kingfisher. 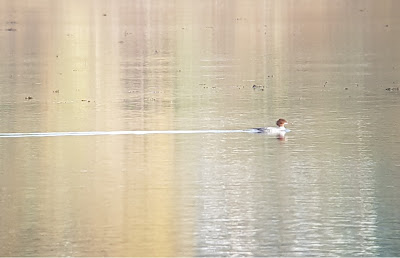 Goosander, Passage House
Posted by Will Salmon at 21:27 No comments:

The first two Blackcap of winter and a Firecrest were found in the Holm Oaks at Milford Park, Teignmouth this morning, however no sign of the odd sounding phyllosc that had been glimpsed nearby. At Passage House at least one wintering Common Sandpiper.
Posted by Dawlish Warren at 18:14 No comments:

A walk around Decoy Lake revealed a Firecrest with a large flock of tits and Goldcrest. Another Firecrest was seen at The Ness on Wednesday. On the lake were 24 Tufted Duck and a Great Crested Grebe.

Catching up over the last couple of weeks; a Great White Egret was seen flying north-east over Bishopsteignton on the 28th October, likely the same bird that was seen flying up the Exe Estuary later in the day. Large numbers of Woodpigeon were migrating on the 27th and 28th October with c.15,000 per hour during the peak in passage.
Posted by Laurie Allnatt at 22:26 No comments:

Half an hour from Teignmouth Yacht Club early afternoon showed large feeding flocks to the North and East of the recording area with good numbers of Gannet, Kittiwake and Razorbill present. Closer in a flock of 63 Common Scoter and a Great Northern Diver.
Posted by Dawlish Warren at 20:44 No comments: