Seawatching from Teignmouth yacht club from 12:40-13:40 failed to add anything new to the patch year list, which stands at 150 - the same as in 2015 but below the recent high of 158 in 2013. I was again unable to locate the Long-tailed Ducks but my Eider hot streak continued as seven birds - three males and four females - flew in from the north and landed on the sea at 13:30. Also noted during the hour four Great Northern Divers, nine Red-throated Divers (five on the sea, four in flight) and a Razorbill. At the same time four Cattle Egrets were seen at Teigngrace, with six reported there on the 29th.

A 2016 review will appear here at some point in January. Happy New Year!
Posted by Will Salmon at 15:37 No comments:

No sign of the Long-tailed Ducks during a very brief look from Teignmouth yacht club this afternoon, but it was good to see some Eiders offshore - a pair and a separate group of three - for the first time this month. Also two Red-throated Divers still.

Late news for Christmas Eve - four Cattle Egrets were still in the cattle/solar panel field at Teigngrace.
Posted by Will Salmon at 16:42 No comments:

Flat calm conditions offshore merited an afternoon look off the yacht club. There was a lot of distant activity (Gannets, gulls & auks) but the two birds closest in took the attention - a couple of fem/imm Long-tailed Duck. They remained for at least an hour drifting slowly south and feeding regularly. Also offshore two Great Northern and two Red-throated Diver, but there was no sign of last week's Velvet Scoter or indeed any other seaduck.
Posted by Dawlish Warren at 17:01 No comments:

The Bonaparte's Gull made a reappearance this morning feeding around the estuary mouth before roosting on the Salty with a single Black-headed Gull on the rising tide. It was last seen on the Exe two weeks ago and is the first sighting on the Teign since 9th September.
Posted by Dawlish Warren at 22:10 No comments:

Seven Cattle Egret were still present this morning at Teigngrace after one was seen on Wednesday, with a further six were found on Friday. This morning in thick fog, they were initially in a field of cows near the solar farm on the Teigngrace road, but gradually made their way over to the fields north of Twelve Oaks Holiday Park. They were clearly wary of passers-by and would frequently hop from field to field. Also present were at least four Little Egret, a Firecrest by Twelve Oaks, with further Firecrest present with a Chiffchaff in Jetty Marsh. 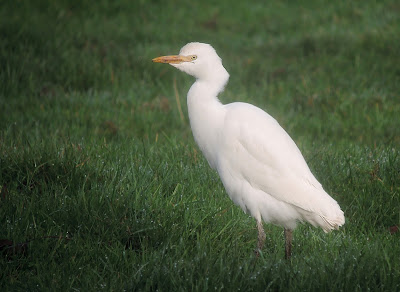 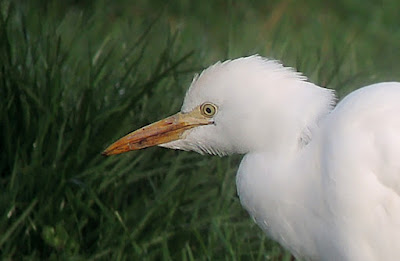 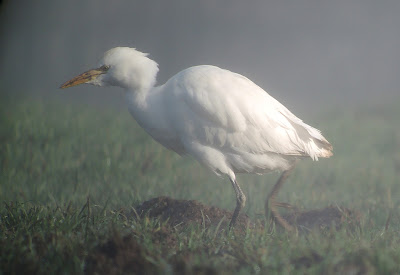 Posted by Laurie Allnatt at 13:33 No comments:

A very large flock of 82 Dunlin was at Passage House this morning. Looking back through the WeBS records, this is the largest since 1991, but still insignificant compared to the 1000-1500 the estuary was getting during the 1970s. With being able to count the wintering flock of Dunlin on one hand over the last few winters, one wonders what's changed?