This morning's fare provided the feeling that we are entering the transitional period between the two seasons. I started off with a brief seawatch from the yacht club at Teignmouth, where four Kittiwakes, 3 auk sp. and a Common Gull flew south in half an hour before the sun became too dazzling to continue. A look around the bowling green failed to produce the hoped-for Black Redstart, but returning to the seafront I relocated the Bonaparte's Gull again just north of the pier. It's now in full winter plumage, with a large dark spot just behind each eye.

After stopping for coffee during a heavy rain shower I visited the Luxton's Steps area just south of Bishopsteignton (of Short-toed Lark fame). There were plenty of small passerines about including around 50 Meadow Pipit, 21 Skylark, c.10 Redwing, a Grey Wagtail and a Redpoll heard overhead. Four Teal flew out from the marshy area adjacent to the railway, which also held a Reed Bunting and two squealing Water Rail. The best bird was a late Whinchat flitting about the tops of the vegetation. 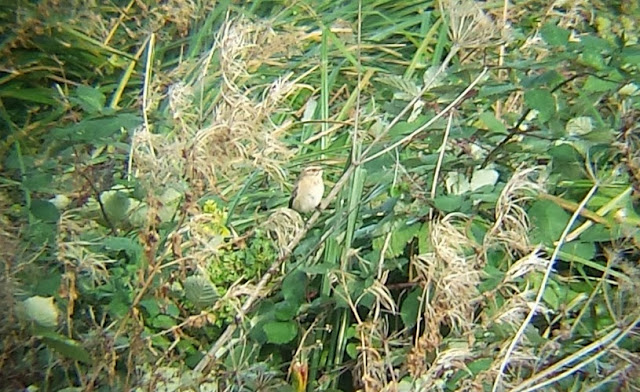 On to Flow Point, where large numbers of Curlew and Oystercatcher were roosting up against the railway; I counted 105 and 390 respectively. Four Dunlin flew out across the water and two Common Sandpipers were on the Point briefly. It was good to see my first returning Red-breasted Merganser, and there were at least 14 Shag on the water, making a mockery of a comment I made in a previous posting about them being uncommon this side of the Shaldon Bridge. The only passerines of note here were 5 Linnet and a Rock Pipit.
Posted by Will Salmon at 22:30 2 comments:

A pre-work stroll between The Ness and Bundle Head yesterday from 07:45-08:45 produced a southbound movement of 39 alba Wagtails, with those low enough proving to be Pied Wagtails. Also 18 Linnet, 12 Goldfinch and 16 Meadow Pipit heading in the same direction. No sign of the Firecrests (though I did see them again on Tuesday) but the trees and bushes did hold 10 Chiffchaff, 5 Goldcrest, a female Blackcap, 5 Song Thrush, 2 Chaffinch and a Bullfinch. One particular sycamore on the edge of The Ness car park has contained at least one or two Chiffs and/or crests each time I've checked it over the past couple of weeks, so this could be the place for a rare warbler. I also noted much of the bramble scrub in the fields at Bundle Head has been cleared, presumably as part of Cirl Bunting habitat management.
Posted by Will Salmon at 13:40 1 comment:

After hearing the Bonaparte's Gull had made a reappearance yesterday, I made Teignmouth my first port of call this morning. It seemed that the town was at the dividing line between an area of clear weather to the north... 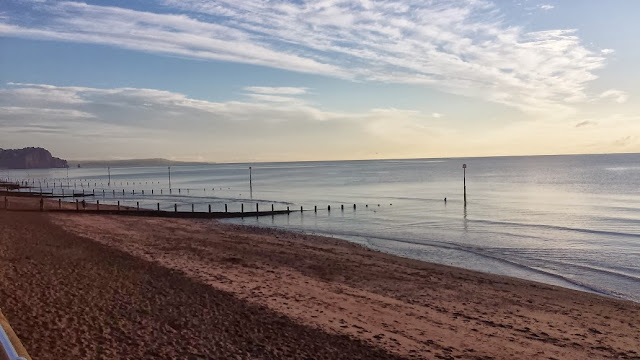 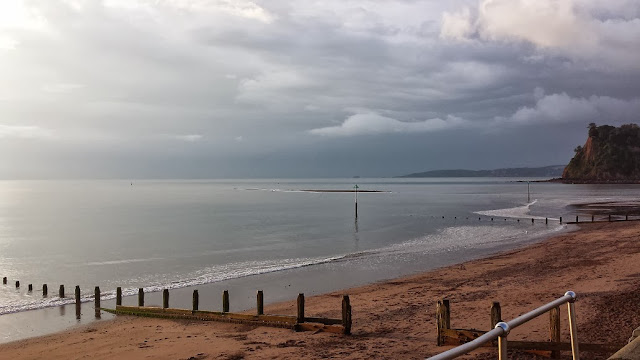 I soon found the Bonaparte's Gull on one of the groynes to the north of the pier, where it was making feeding forays into the surf. After a while it seemingly got bored and flew off towards the railway. 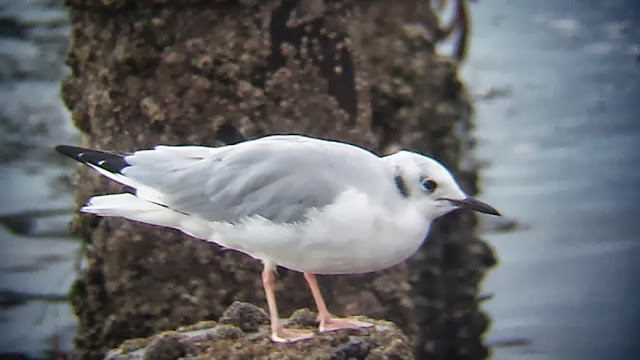 Very little was happening offshore, although a Curlew appeared to fly in-off and a couple of Lesser Black-backed Gulls were on the sandbar. Also a Grey Seal was juggling a fish in the mouth of the estuary which was a nice surprise.

I then moved onto The Ness, where I was unsuccessful in my quest to find a Yellow-browed Warbler but consolation came in the form of two Firecrests feeding together in the holm oaks. Between there and Bundle Head I also recorded 7 Goldcrest, 9 Chiffchaff, 3 Blackcap, 5 Song Thrush, 30 Swallow, c10 Meadow Pipit, 8 Skylark and 2 Siskin. I then moved onto Luxton's Steps pond where 4 Teal represented a welcome increase in waterfowl there and 15 Little Egrets were roosting in the trees. The surrounding bushes and fields held 30+ Meadow Pipit, 9 Skylark, 2 Blackcap, a Reed Bunting and a Grey Wagtail. My last stop of the day after lunch was Passage House which yielded 4 Greenshank, 6 Swallow, a Lesser Black-backed Gull and a Kingfisher.
Posted by Will Salmon at 18:37 No comments:

It's only really Curlews and Oystercatchers that a need a proper count doing now, so Dale, you could use my counts from today and just count the Oyks and Curlews any time over the next week if you can :-)

Also, the Bonaparte's Gull was reported back in Teignmouth today. I wonder where it went.

Posted by Laurie Allnatt at 21:41 No comments: 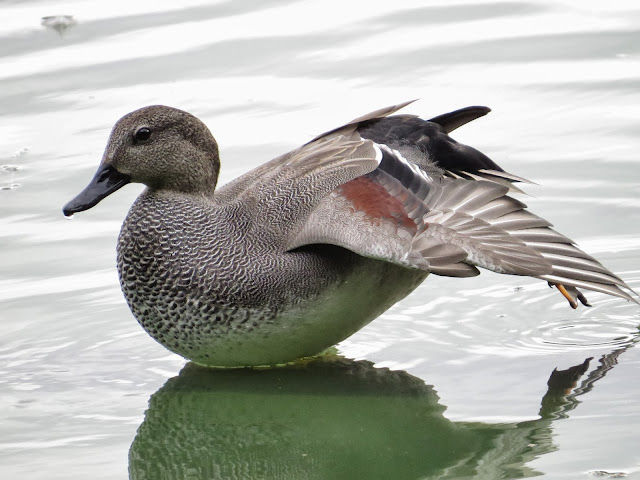 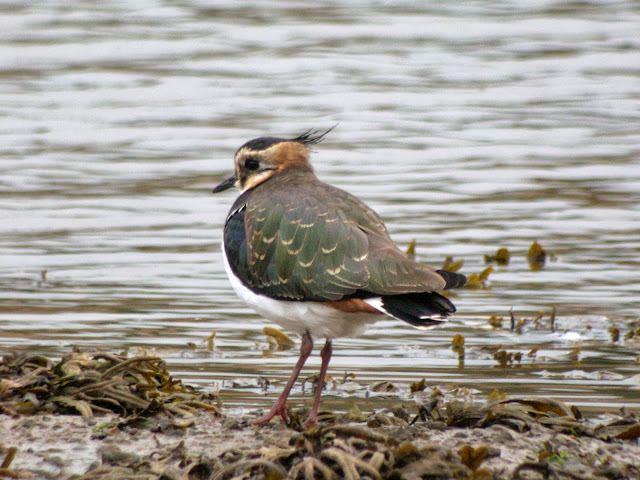 Not much to shout about

A look around Hackney Marshes & the racecourse this morning produced the following: 1 Wheatear, 7 Chiffchaff, 2 Goldcrest, 2 Swallow, 2 Grey Wagtail, 35 Pied Wagtail, 3 Water Rail, 23 Canada Goose, c.50 Goldfinch, 8 Linnet and a Kingfisher. Overhead were 3 Siskin and a Raven.
Posted by Will Salmon at 12:56 No comments:

This morning I watched the Passage House area for an hour on the falling tide. Nothing outstanding but I did see my first two Lapwing of the autumn, plus a Grey Plover, 70 Curlew, 52 Little Egret, 7 Grey Heron, 3+ Sandwich Tern, four Little Grebe, a Kingfisher and a Rock Pipit.

Yesterday I acted on a last-minute impulse and took a day trip to the Isles of Scilly, my first visit to the archipelago. It proved worthwhile with one lifer - an Arctic Warbler - and a supporting cast that included a Bluethroat, a Yellow-browed Warbler and a Purple Heron that I jammed in flight whilst waiting for my plane back. It goes without saying that any of these would be welcomed on the Teign!

On Friday I took a mid-morning stroll between The Ness and Bundle Head. Migrant numbers were generally low, with just three Chiffchaff, two Goldcrest and a Blackcap. Overhead there was some movement, with c.15 Swallow heading south, 12 Skylark moving in the opposite direction, and at least 25 Meadow Pipit loafing about. 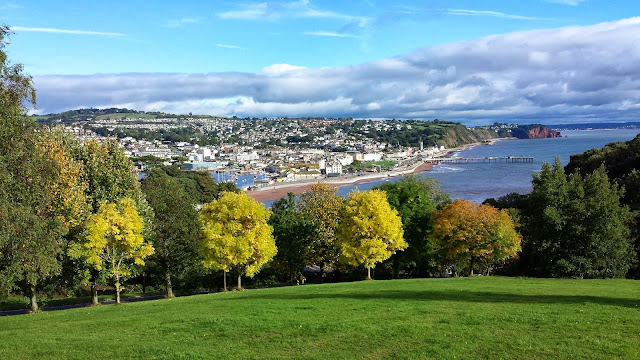 View across to Teignmouth from Shaldon golf course
Posted by Will Salmon at 21:52 2 comments: