Will and I watched at Flow Point this morning, where three juvenile Black-tailed Godwits and a flyover Yellow Wagtail were the picks of the bunch. There was no sign of any small wader flock, however, two Common Sandpipers fed on the marsh, and a couple of Redshank were amongst the usual flock of Curlew and Oystercatcher.

Just as we were contemplating leaving around 10am, the gulls and waders took to the air and two Ospreys flew in high from the north-east. They both circled for about 10 minutes, seemingly investigating the estuary, before gaining height again and flying off independantly of each other to the west.

Posted by Laurie Allnatt at 19:35 No comments:

Bundle Head from 07:30 - 09:30 this morning produced a reasonable mix of migrants (but no White Storks unfortunately): two Spotted Flycatchers (flycatching in ash tree by road), two Tree Pipits, a Yellow Wagtail (heard only), a Wheatear, 10+ Blackcaps, two Whitethroats, two Willow Warblers, 6+ Chiffchaffs, 1+ Swift (heard only), a Grey Wagtail and three Great Spotted Woodpeckers south. A slow but steady passage of Swallow and House Martin was also a feature of the morning though most were passing at height and heard only.
Posted by Will Salmon at 21:05 No comments:

This juvenile Yellow-legged Gull was at Passage House as the tide was falling late morning. Whilst the bill appears on the small side it showed most of the other typical features. 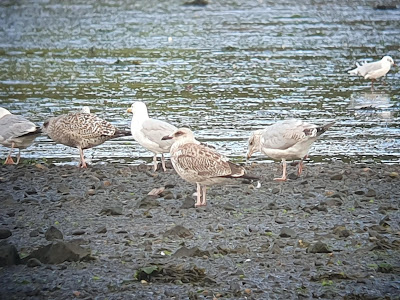 The dark greater coverts and plain tertials stood out 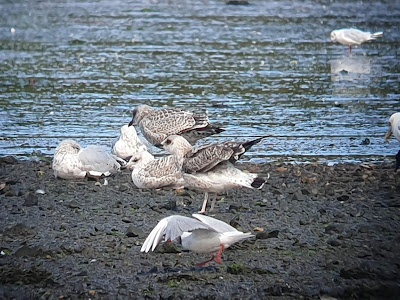 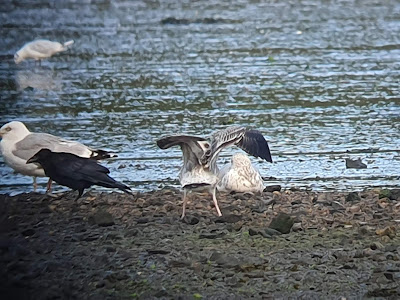 Elsewhere, waders at Flow Point included a Turnstone, five Whimbrels and three each of Dunlin, Ringed Plover and Common Sandpiper. Despite the disturbance from the country show a Wheatear and a Stonechat were on the racecourse.

Again, despite promising weather conditions, with a strong southerly wind and rain, the birds didn't match up to expectations. Eight Common Terns flew south with another 10 "commic" terns and 50+ Sandwich Terns. A small pale skua sp. was distantly offshore before being lost to the mist, with other counts including 10 Manx Shearwater, 55+ Kittiwakes (about 20% juveniles), 20+ Fulmar and two juvenile Mediterranean Gulls.

Posted by Laurie Allnatt at 20:16 No comments:

Tern passage but no shearwaters

Seawatching from the yacht club from 06:30 - 08:30 on Saturday morning (joined by Adam for the last hour or so) was underwhelming to say the least given the conditions, with a big fat zero shearwaters noted. There was however a decent movement of 90+ Sandwich Terns heading south along with six Common Terns, a light phase Arctic Skua, 12 Mediterranean Gulls (three adults and nine juveniles), c.30 Kittiwakes, c.15 Fulmars and singles of Little Egret and Dunlin.
Posted by Will Salmon at 19:44 No comments:

Nothing out of the ordinary on the estuary this morning but there was a good variety nonetheless. A mix of waders gathered on and around Flow Point at high tide included 223 Oystercatchers, 66 Curlew, 11 Whimbrels, ten Redshanks, five Common Sandpipers (plus another three at Passage House) and two each of Dunlin and Ringed Plover. Other totals included three Greenshanks (Passage House), 36 Little Egrets, 32 Mute Swans, eight Canada Geese, seven Shelducks (including four well-grown young), four Mallards, four Sandwich Terns, ten Cormorants and five Shags. 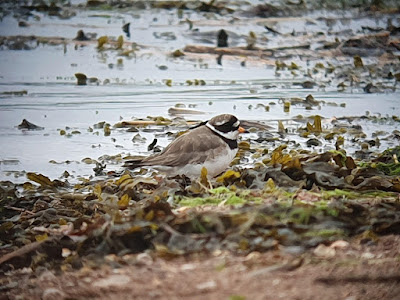 Ringed Plover
Posted by Will Salmon at 21:42 No comments: