During a belated WeBS count this week I worked the estuary in the following order: Flow Point - The Salty - Flow Point - Passage House from about midday until 2pm. The two visits to Flow Point was my attempt to locate the small waders which was to no avail. The highlight was a Grey Plover at Passage House which are relatively uncommon on the Teign. The reaction as I scanned was a mildly excited initial "Ooh a Plover!" followed by a resigned but contented "oh it's a Grey."

In grey, damp, muggy conditions late morning, a brief look at Passage House just after high tide produced little other than two Sandwich Terns in with the Black-headed Gulls. I then went to Flow Point and 'scoped the waders on the far side, and picked up a Knot distantly amongst the Oystercatchers and Curlews; presumably the same bird seen on the Salty on the 15th. As the tide dropped I moved round the Point to try to get a closer view of the Knot, but the waders were already dispersing to feed and I was unable to relocate it. A Turnstone (below) proved much more obliging, and a juvenile Sandwich Tern was making a racket trying to persuade its parent to bring food. A further half dozen Sarnies were sat on buoys in the estuary alongside two Shags - uncommon this side of the Shaldon bridge. 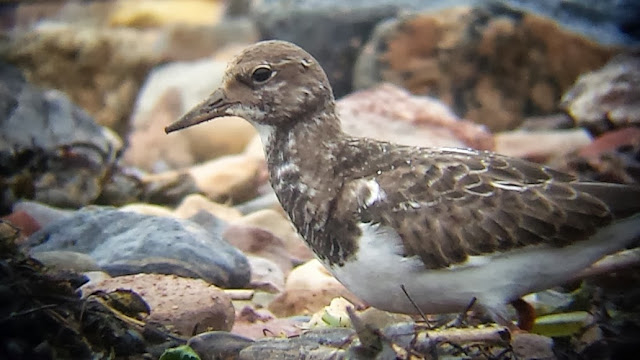 I've just had information back about a ringed Mute Swan that I found at Passage House on the 2nd August - lime green NU9. It's another RSPCA bird found as a cygnet too small to survive. After rehabilitation it was released at Exeter Quay on 13th January 2011, so has survived two and a half years post release.

The Bonaparte's Gull is still at Teignmouth and two Mediterranean Gulls were also reported there a couple of days ago.
Posted by Laurie Allnatt at 11:52 No comments:

The Bonaparte's Gull was still present today making lots of funny sounding calls. It did however seem to disappear from time to time, maybe to the south end of the beach. 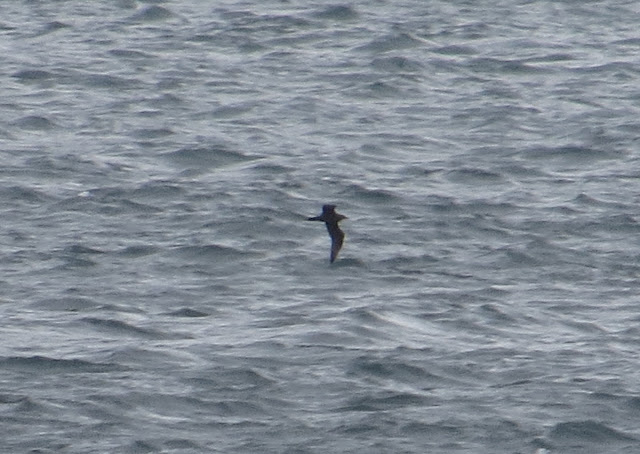 Posted by Laurie Allnatt at 22:25 No comments: 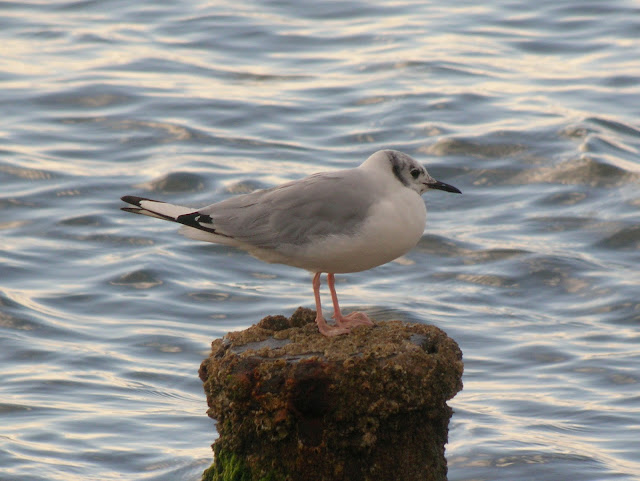 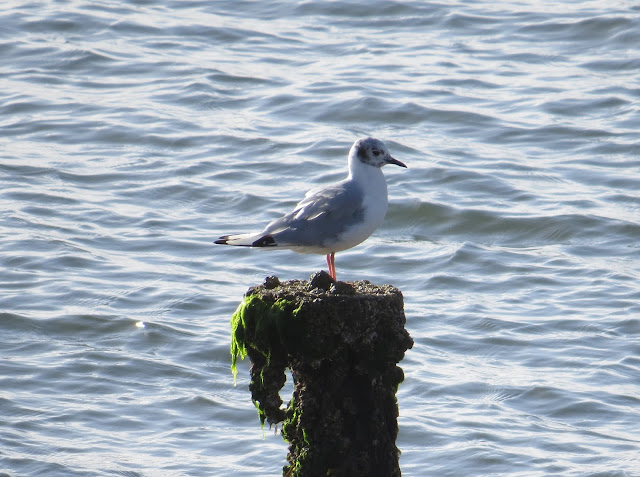 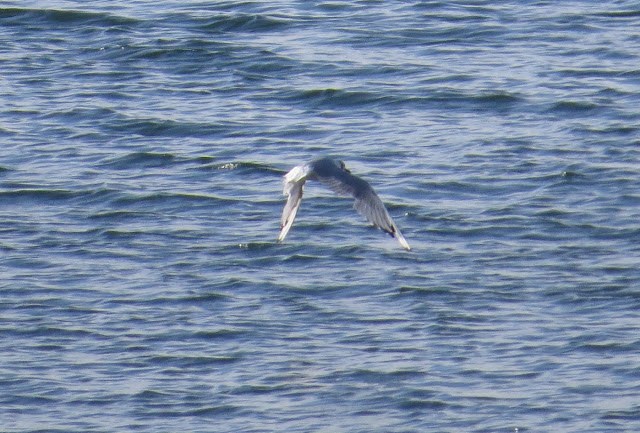 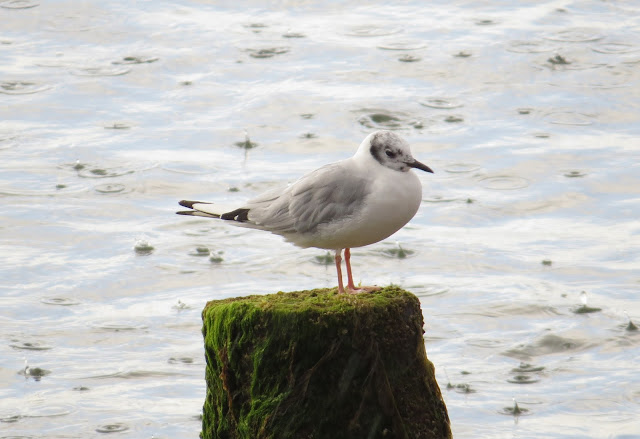 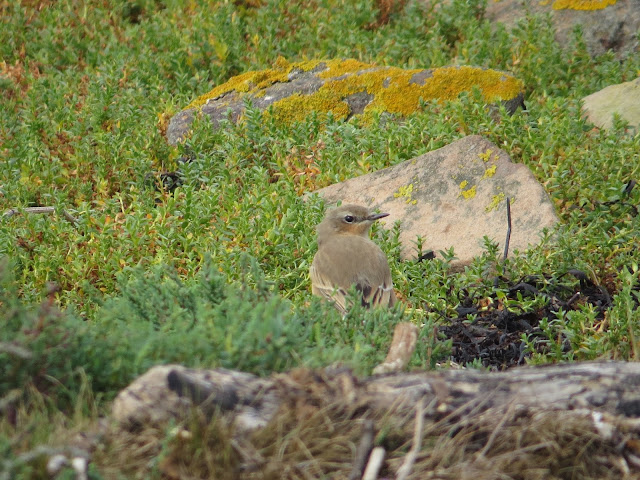 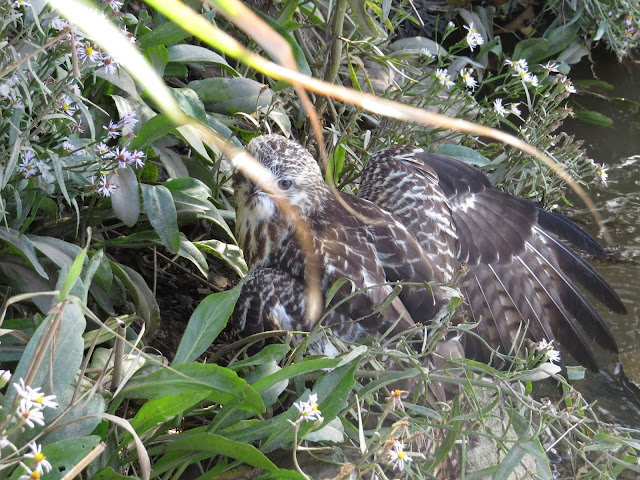 Posted by Laurie Allnatt at 16:45 No comments:

All records from the sofa or bedroom - saves getting wet! Late morning on the Salty there were five Sandwich Tern and a Dunlin; my first there, so I expected that to be bird of the day. However following a high tide visit to the Warren things became decidedly unTeign...

First up was a Bar-tailed Godwit on the Salty, then three Ringed Plover and a flock of 24 Turnstone, not at all bad for the Teignmouth end of the river, all of these were however surpassed by a Knot - a genuine Teign rarity. Once the waders had flown upriver I turned my attention offshore, here a single Black Tern was lingering and then a couple of Balearic Shearwater flew south before doubling back north. Over the next 30 minutes it became obvious a feeding/roosting flock of Balearic were present - occasionally heading south into Labrador Bay with a minimum total of 28 counted. Both them and the Black Tern were still present around 7.15pm so presumably roosted nearby.

Kev
Posted by Dawlish Warren at 21:50 No comments:

I had a decent couple of hours' seawatching at Teignmouth this afternoon from 14:30 - 16:45, with the rain largely holding off and visibility remaining good. Totals were c.60 Balearic Shearwaters (almost certainly an overestimate since some birds were moving back and forth, but did include a group of 15 loafing on the sea together), 7 Manx Shearwaters, 8 distant unidentified shearwater sp., 4 Black Terns, 1 Arctic Tern, 12 commic terns, 6 Arctic Skuas, 1 Great Skua and 6 Common Scoters. Also a steady trickle of Sandwich Terns and Gannets and a handful of Kittiwakes. Apart from the circulating shearwaters, everything was heading south. The Arctic Tern (a juv) was nice and close to allow for positive identification, and the Black Terns and skuas also had the courtesy to pass relatively near to shore. From what I gather neither Dawlish Warren nor Portland could compete with these totals, so it's nice for a change that Teignmouth scored higher than other better-known watchpoints in the region.

Yesterday I only had time for a brief early morning look at Bundle Head. The bushes contained standard autumnal fare - 13 Chiffchaffs, 7 Blackcaps, 3 Whitethroats - but overhead there was an on-going arrival of Meadow Pipits in off the sea in small groups; I counted at least 70 moving inland in the hour or so I was there. Always good to see 'viz mig' in action.
Posted by Will Salmon at 21:28 No comments:

I've checked Flow Point a couple of times over the last few days. On Friday I missed the high tide by an hour so the waders had moved out to the estuary wall and were mostly too distant to check through. There were however seven Greenshank.

Today, The birds were roosting on the point. There were 31 Dunlin and a few Ringed Plovers but nothing scarcer in with them. A Bar-tailed Godwit was a nice surprise though. Unbelievably I've gone the year without seeing one! There was also a Wheatear on the point. 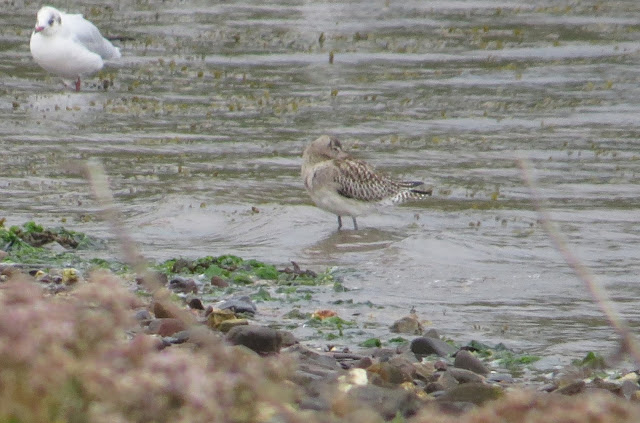 I've just got back from The Azores on a university trip. Didn't have any time (or a scope) for birding so didn't see that much. I did see the Bullfinch (just about!) and plenty of Cory's Shears though.
I've just found that I missed out on a White-tailed Tropicbird which was there for the whole week about 10 mins walk from where we were staying!!

While I was away, I also missed out on a Black Tern briefly on The Salty seen by Kev on the 31st.

I checked Passage this morning but the only thing of note was a Clouded Yellow over the estuary.

Before I left, Will found a colour-ringed Curlew on the 26th and I found another a couple of days later.

I had a brief worry that they were the same bird (the green looked very dark in the field) but looking at the photos when I got home, you can clearly see that they are different birds, but both from the same scheme.

The one with the black ring was ringed on 25/4/07 as a breeding female in north west Germany. She returned to the same breeding site in 2008. After this, she was observed to return to the same area but when all of the other Curlews started to breed, this bird disappeared! Our sighting is the first away from the breeding area.

The one with the green ring was ringed on 16/5/05 as a breeding Male in the same place (5km east of Saerbeck if you're interested), and he has been seen to return to this area every year since being ringed. Again, our sighting is the first away from the breeding area. Sadly he seemed to have an injured left leg so not sure if he'll return to breed next year. Would be interesting to know.

Lets hope this Yellowlegs has flown south. I'll be out looking tomorrow.
Posted by Laurie Allnatt at 16:45 No comments:

I was up at Bundle Head shortly after sunrise on Saturday and it was evident that numbers of Chiffchaff and Blackcap had increased significantly; the birds were very active and, in the Blackcaps' case, highly skulking, so the most accurate counts I could come up with were 30+ and 20+ respectively. There were also two Willow Warblers, two Whitethroats, four Grey Wagtails overhead and my first dozen Meadow Pipits of the autumn. A bit of quality was provided in the form of this Whinchat: 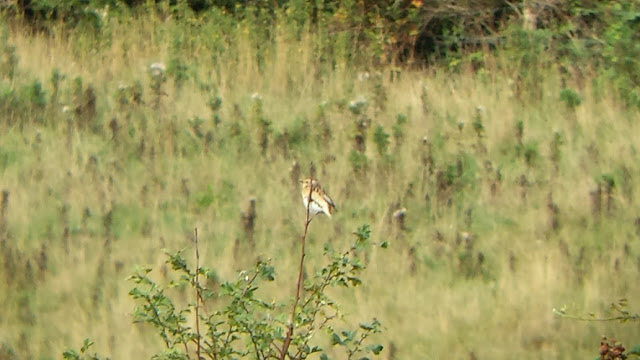 After a brief stop for coffee I headed to Flow Point and met Robin there. It looks like the Little Stint has moved on but the Dunlin (total count 30) and Ringed Plovers (18) gave exceptionally close views, approaching within about 15 feet of us as we scanned the estuary optimistically (and unsuccessfully) for an Osprey. There was a fair selection of other waders with 3 Redshanks and singles of Greenshank, Whimbrel and Common Sandpiper alongside the more numerous Oystercatchers and Curlew, with at least half a dozen Sandwich Terns in the estuary and a Wheatear in the saltmarsh.
Posted by Will Salmon at 18:51 3 comments: