A watch in Teignmouth produced no unexpected surprises but four Blackcap was the winter peak so far alongside a few Long-tailed Tit. Outside the garden the 'usual' species were visible on the Salty but still no white-wingers.

Elsewhere three Avocet were at Flow Point and two Common Sandpiper and a Wigeon were at Passage House.

Posted by Dawlish Warren at 18:17 No comments:

The Bonaparte's Gull made a brief return to the patch this morning feeding in the mouth of the estuary with other gulls. There was no sign later but it was refound mid-afternoon back on the Exe Estuary at Shelly beach, Exmouth. Also in Teignmouth at least five Great Northern Diver were offshore but still no sign of any white wingers in the 5-600 Herring Gull on the Salty.

Posted by Dawlish Warren at 23:53 No comments:

A Black-throated Diver on the estuary between Flow Point and Coombe Cellars was a surprise during this morning's WeBS count. Foraging constantly, it was mobile under the water and only surfaced for a matter of seconds between dives but the glass-like surface allowed for good views. It's over a month since Kev saw one off Shaldon so this was quite possibly a different bird.

Elsewhere five Avocets at Passage House were the first of the year and there was a welcome increase in Red-breasted Mergansers to 29. Other totals included 38 Shelducks, 353 Oystercatchers, 91 Curlew, 50+ Redshanks, 42 Dunlin, 14+ Turnstones, eight Ringed Plovers, four Common Sandpipers, two Greenshanks and a Kingfisher. 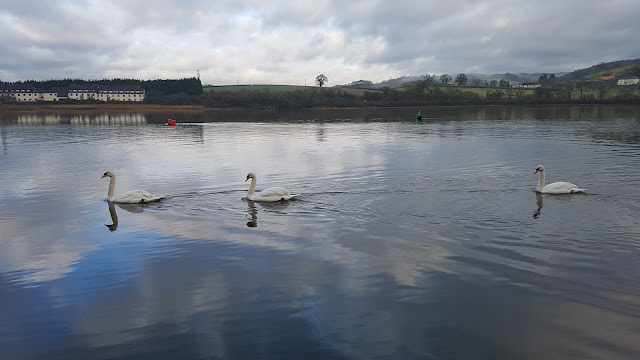 Mute Swans, Passage House
Posted by Will Salmon at 16:11 No comments:

Three Firecrests put in appearances this weekend - two in the woods at Decoy Country Park this morning, and the Kingsteignton Homebase bird again yesterday afternoon (per Cilla Ingram). Now this species is breeding in Devon one assumes that sightings will continue to increase. Also at Decoy Stock Dove and Lesser Redpoll were new for the year with a couple of each around the fringes of Wolborough Fen, and early signs of spring included a drumming Great Spotted Woodpecker and a pair of Sparrowhawks in full display flight.

On Thursday three Cattle Egrets were reported in the solar panel field at Teigngrace although there was no sign of them yesterday or today.
Posted by Will Salmon at 22:01 No comments:

An adult Mediterranean Gull came in to Decoy during a well timed scan of the lake but avoided the bread chasing Black-headed Gull flock, also there 17 Tufted Duck and a vocal Nuthatch.  Again no sign of the Cattle Egret at Teigngrace but eight Little Egret, 60 Redwing and two Mistle Thrush were in the fields.

Elsewhere an early morning look around Passage House produced ten Little Grebes, two Greenshanks, two Wigeon, a Lesser Black-backed Gull and a good count of 92 Great Black-backed Gulls. Fourteen Teal and 17 Shelducks were on the pond at Luxton's Steps, and eight Ringed Plovers and 59 Dunlin were among the waders roosting between Flow Point and Salcombe Dip.
Posted by Dawlish Warren at 19:59 No comments:

The past few days

A vocal Raven and two Stonechats were at Teigngrace this morning along with a pair of Sparrowhawks in display flight. There was no sign of the Cattle Egret though it was apparently still present (but elusive) yesterday. On Thursday Mark Bailey had a storm-driven Kittiwake on a flooded pool on the racecourse, and Cilla Ingram saw another Firecrest in vegetation surrounding Homebase in Kingsteignton on Tuesday.
Posted by Will Salmon at 22:32 No comments:

A dull, wet morning was brightened by the discovery of a Cattle Egret by Mark Bailey at the now regular haunt of Teigngrace. It was in the large field west of the level crossing with four Little Egrets and a gang of Black-headed Gulls. The road north of the junction to Twelve Oaks is closed for several days, allowing a rare and enjoyable opportunity to view from the road bridge completely devoid of traffic.

Decoy Country Park held the usual assortment of waterfowl and woodland birds athough single Wigeon and Little Grebe were semi-noteworthy. A male Stonechat was on Newton Abbot racecourse along with a mixed flock of thrushes that included 10 Fieldfares (scarce here) and c.15 Mistle Thrushes. A short seawatch from Teignmouth yacht club at lunchtime produced c.40 Common Scoters, seven Great Northern Divers and a handful of Kittiwakes heading south. To the north several hundred Gannets were gathered off Dawlish seafront.
Posted by Will Salmon at 19:29 No comments:

Returning to Devon from the south-east this afternoon meant I only had time for a quick blast around Hackney Marshes in the hour before sunset. I managed just 27 species but this did include a Firecrest in the woods and brief views of a somewhat pale Chiffchaff in bushes by the road. Elsewhere a brief early morning look from a Teignmouth window showed a female Black Redstart, a couple of Blackcap and a Mistle Thrush competing over palm berries. Robin Shute reported five Avocets on the estuary yesterday at Passage House.

Happy New Year to all readers of this blog!
Posted by Will Salmon at 20:56 No comments: