Spent the afternoon checking various sites around the Teign with varying rewards. Starting at the east of the patch in Teignmouth there was still no sign of any wintering Black Redstart and a no show from the Firecrest along the railway. Viewing from the Yacht Club three Eider were offshore, an immature male of Sprey Point and a female and a second immature male almost under the pier. Also on the sea 67 Common Scoter and a Red-throated Diver.

Next stop was Teigngrace at the far western end of the patch, here the flooded fields held six Little Egret, 90+ Mallard and two Teal but nothing could be unearthed in the tit flock along the Templar Way. A quick stop at Hackney Marshes revealed another couple of warblerless roving tit flocks.

A final low tide stop at Passage House saw a Water Pipit and half a dozen Snipe flushed from the Saltmarsh by a couple of dogs, two Common Sandpiper in the channel and 13 Little Egret heading downriver to roost.

Posted by Dawlish Warren at 19:51 No comments:

No luck with finding a Black Redstart around Teignmouth port this morning, but a juvenile Dark-bellied Brent Goose foraging around the foot of the slipway was a belated first for the year. Initially it appeared to be hanging its right wing slightly, suggesting an injury, but after waddling up to the Polly Steps car park it readily took flight and landed randomly in a park on the opposite side of the railway. After almost being attacked by a dog it clearly thought better of it and flew back to the estuary, where it was still present on the Salty this afternoon. Also around Polly Steps today 10 Turnstones and a Firecrest in the scrub by the railway. 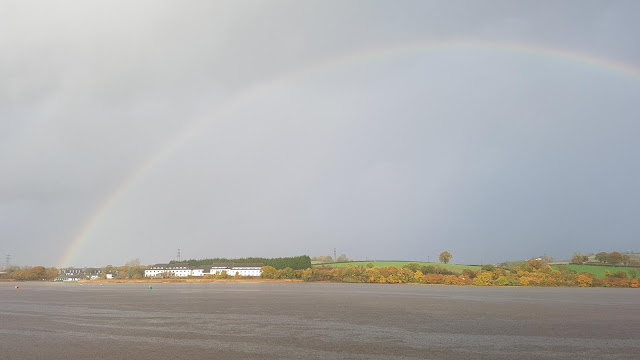 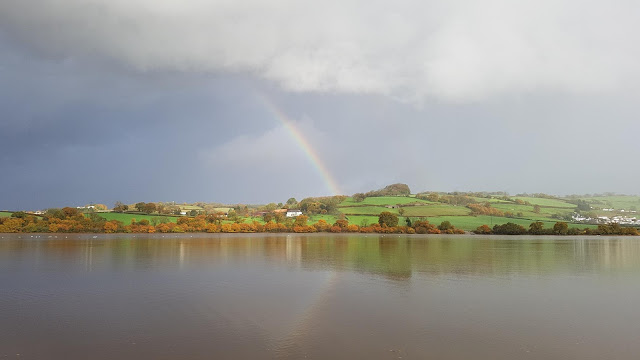 A couple of shots I forgot to post from Passage House last weekend, in between the downpours
Posted by Will Salmon at 20:48 No comments:

Elsewhere the floods at Teigngrace held 12 Little Egrets, three Teal, 95 Canada Geese and 500+ Black-headed Gulls on Sunday morning. No Cattle Egrets in the cattle fields - yet.
Posted by Will Salmon at 23:23 No comments:

A quick afternoon look from Teignmouth Yacht Club showed a raft of 34 Common Scoter and two Great Northern Diver. More unexpected though were three immature Velvet Scoter, the first of the year, they kept separate from the scoter flock being closer in off Sprey Point.

Posted by Dawlish Warren at 16:52 No comments:

The timing of the dropping tide and sunset was ideal for checking gulls pre-roost on the Salty, especially with the windy conditions. The wind meant no birds were roosting offshore so numbers where much higher than normal. I had intended to count the roost but my second scan through the birds scuppered this plan.

The distraction was a smart first winter Caspian Gull, only my second on the estuary. Almost as soon as I found it all the birds were flushed by a helicopter, but they soon settled back down and the bird was easily picked up a second time. although distinctive, refinding was helped but it coming closer and roosting separately from the majority of other larger gulls.

Also on the Salty seven Turnstone and the white-headed Oystercatcher.

Late news for Thursday - an immature Eider was off Teignmouth per Devon Sea Safaris
Posted by Dawlish Warren at 18:44 No comments: