Fourteen Common Sandpipers were at Passage House this lunchtime, with more probably hiding in the channels. Late July appears to be the peak time for numbers of this species on the estuary, with 15 counted at Passage House exactly a year ago and 17 on 25th July 2013.

Seawatching from Teignmouth Yacht Club from 15:20-16:20 produced 2 adult Mediterranean Gulls and an adult Common Gull heading south, and around 30 each of Manx Shearwater and Sandwich Tern.
Posted by Will Salmon at 18:34 No comments:

...well just two to be precise but one was new for the year. The rising tide flushed a Sanderling and a Dunlin off the Salty this morning, both flying off up river. Sanderling is barely annual at the east end of the patch and a major rarity further west.
Posted by Dawlish Warren at 22:21 No comments:

There was no sign of the Gull-billed Tern on the estuary this morning, leaving the assembled group of 20+ birders at Passage House disappointed thus far. A juvenile Yellow-legged Gull was the highlight of the WeBS count, supported by reasonable numbers of waders including 70 Oystercatchers, 63 Curlew, 8 Whimbrel, 6 Common Sandpipers, 4 Greenshanks and a Black-tailed Godwit. Also present were 9 Sandwich Terns, 25 Little Egrets, 41 Mute Swans, 2 Little Grebes, 550+ Black-headed Gulls (no Meds amongst them) and a Kingfisher.
Posted by Will Salmon at 12:44 No comments:

A brief look off Passage House after work this evening produced the first Dunlin and Greenshank of the autumn, both adults in summer plumage, along with four Common Sandpipers and eight Redshanks.

The Gull-billed Tern has continued to entertain visitors to Passage House over the past few days. I saw it again yesterday early morning, although it appears to have been performing best during the middle part of the day when the tide has been low allowing it to forage over the exposed mud. Some excellent pictures have appeared on Devon Bird Sightings along with a video.
Posted by Will Salmon at 22:19 No comments:

A brute of a juvenile Yellow-legged Gull that was on the Salty yesterday evening and again this morning is the best the east end of the estuary has had to offer of late along with an adult Mediterranean Gull on Tuesday and up to eight Sandwich Tern.

A quick look off Passage House on this evening's high tide drew a blank with regard the Gull-billed Tern (it was still present until 14.30 at least) but a single Black-tailed Godwit and four Common Sandpiper were present.
Posted by Dawlish Warren at 20:29 No comments:

Well that was unexpected! A fairly laid back late afternoon scan for gulls and waders off Passage House took a dramatic twist when I found this Gull-billed Tern at 17:30 roosting on the spit with Black-headed Gulls. Initially I wasn't 100% certain as the bird was asleep and only very briefly lifted its head, but by the time I'd sent a few texts and made some calls it had stood up and showed its short, chunky bill. 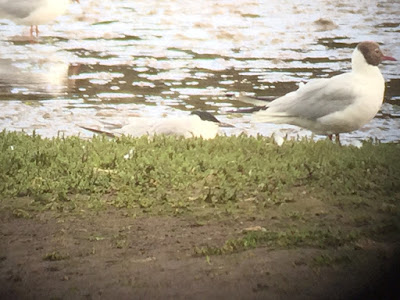 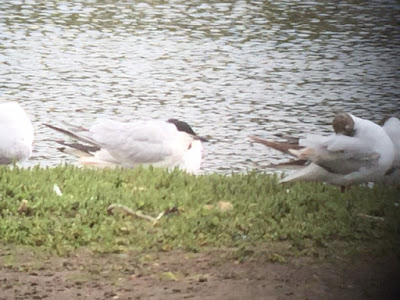 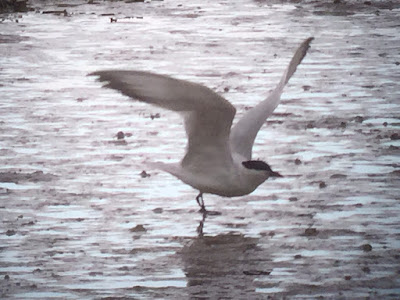 The tern subsequently showed very well foraging over the saltmarsh from 18:45, catching a crab before flying down the estuary at 19:10. It was still present at 20:20 although further downriver towards Coombe Cellars. I think most people who were local and wanted to see the bird caught up with it; thanks to Mark Bailey for contacting those whose numbers I don't have.

Somewhat overshadowed but also present off Passage House were 5 Mediterranean Gulls (including 4 juveniles), 2 Sandwich Terns, 2 Common Sandpipers, 40+ Curlew and a Whimbrel.
Posted by Will Salmon at 21:11 No comments: