An evening visit to Passage House was fairly quiet as the tide was still out but a pair of Teal, three Common Sandpiper and a dozen Redshank were present on the mudflats with a couple of Reed Bunting and Water Rail on the islands. At around 7.15 a group of four Little Egret flew over the A380 bridge and headed east up the estuary to roost, these were followed five minutes later by a 10 more egrets but eight of these were Cattle Egret. These birds are presumably the same ones seen on patch earlier this month now joined up as a single flock.
Posted by Dawlish Warren at 22:36 No comments:

The alarm calls of the local Herring Gulls revealed the second Osprey of the year which lingered over the Salty for 10 minutes late afternoon before heading north along the coast. On Thursday a Great Northern Diver was in the estuary at Teignmouth.

Posted by Dawlish Warren at 23:38 No comments:

Today, four of the Labrador Bay Long-tailed Ducks were distantly visible from the bottom of the smugglers tunnel at Shaldon with c.130-140 Common Scoter. A female Eider was off The Ness before flying off unseen.

Yesterday, Will had the seven Cattle Egrets and 16 Little Egret at Teigngrace, with an impressive flock of 150+ Sand Martin hawking over the same fields. 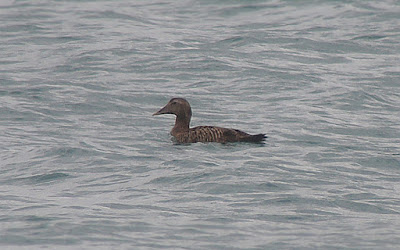 Posted by Laurie Allnatt at 19:30 No comments:

Three Lesser Redpolls were feeding quietly in a silver birch alongside the cycle path by the racecourse this morning. The hoped-for Wheatear failed to show but there were a few more Meadow Pipits on the move and the resident male Pheasant has increased his harem of females to three. 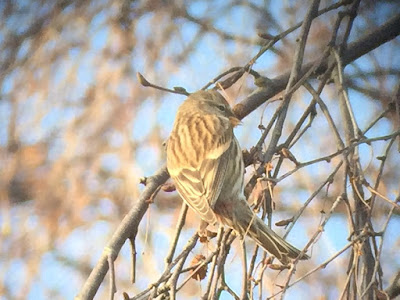 The discovery of two Cattle Egrets roosting with the gulls at Passage House was the surprise highlight of this morning's WeBS count. They stayed until 09:40 (allowing Kev and Robin to catch up with them) before flying south and appeared to land just beyond the sewage works; a brief search of the fields at Buckland drew a blank. Forty minutes later the five Teigngrace Cattle Egrets were in trees at Blatchford Farm; this site is approximately 1.5km to the north-west so the Passage House sighting almost certainly involved different birds.

Other counts around the estuary included a male Gadwall at Flow Point, three Teal, 38 Shelducks, 14 Mute Swans, 17 Red-breasted Mergansers, two Great Crested Grebes, 155 Oystercatchers, 47 Redshanks, 12 Snipe, eight Curlew and four Common Sandpipers. Gull passage continues with an impressive 144 Common Gulls at Passage House, which I understand is the highest count on the estuary for almost a decade. Kev also had a Great Black-backed Gull that had been ringed in Looe and was previously seen at Dawlish Warren in October 2016.

Yesterday there were four singing Chiffchaffs and a Blackcap at Hackney Marshes, and Robin had the first four Sand Martins of the year over Rackerhayes.
Posted by Will Salmon at 21:59 1 comment:

Signs of spring abounded during a couple of visits to Hackney Marshes this week, with many of the resident species now in song including Reed Bunting, Treecreeper and Goldcrest. Skylarks have been audible over the racecourse and small numbers of Redwings have been passing through, one or two of which gave bursts of their rather uninspiring song. Nothing unusual has been noted although two Siskins overhead yesterday were my first there this year. 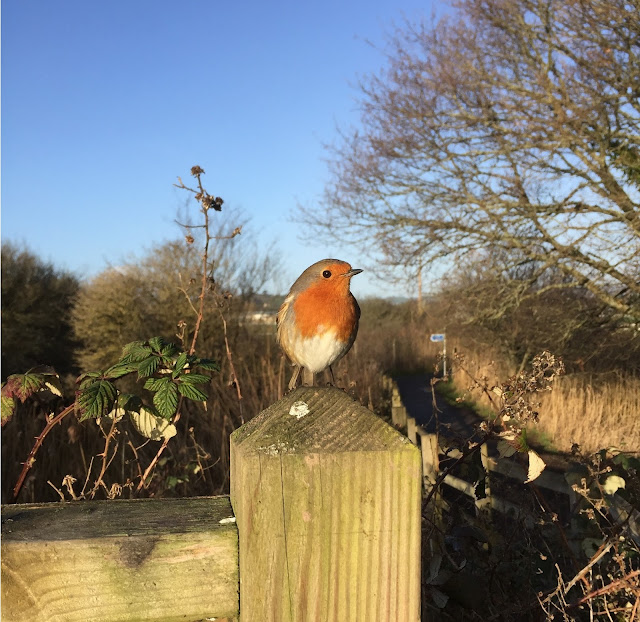 This Robin at Hackney Marshes frequented an area where people regularly feed birds and was so bold it could be approached to an arm's length.
Posted by Will Salmon at 08:01 No comments: