On a fine winter's morning the woods at Decoy Country Park held plenty of birds including at least one Marsh Tit, a Treecreeper, two Great Spotted Woodpeckers and three Nuthatches. On the lake the Great Northern Diver was still present alongside just four Tufted Ducks; one wonders what has caused the latter to decline from a regular wintering flock of 30+ just a few years ago.

Three first-winter Little Gulls appeared along Teignmouth seafront on Monday, and one of them had the courtesy to stay until the weekend to allow myself and Kev to catch up with it yesterday. Although it went missing for short periods, it spent the majority of the time foraging along the shoreline either side of the pier, giving exceptional views in flight. Two Eiders were still present on the rocks at the foot of the Ness, and four Great Northern Divers, two Red-throated Divers and nine Common Scoters were offshore towards Holcombe.

Elsewhere, 15 Lapwings at Passage House was the highest count this month of this declining winter visitor. On Friday the female Goldeneye was still in the channel there at high tide alongside the female Wigeon, a couple of Red-breasted Mergansers and Little Grebes, four Greenshanks and three Common Sandpipers.

A Great Northern Diver was still on Decoy Lake with a lone Tufted Duck having first been reported a week ago. 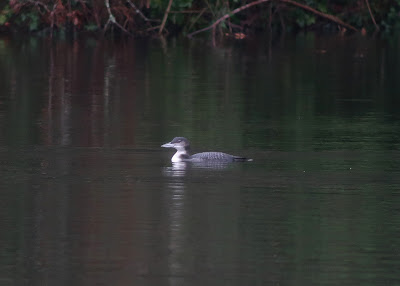 The floods at Teigngrace produced an unexpected variety of dabbling ducks this morning with three Shovelers, 11 Gadwalls, 12+ Teal and 40+ Mallards alongside 11 Mute Swans, nine Little Egrets and a female Stonechat. At the other end of the patch three Eiders - a male and two females - were in the mouth of the estuary off Teignmouth along with a Great Northern Diver. A further three GNDs were to the north of the pier, including two giving great views together off the yacht club; one was also seen on Decoy Lake this morning.
Posted by Will Salmon at 18:24 No comments:

A female Goldeneye in the channel off Passage House was the standout bird of this morning's count, which was postponed by a day after a wet and very windy weekend. This is the first Goldeneye on patch since January 2013, up until which time it was a regular wintering bird on the estuary. Other totals included 302 Oystercatchers, 86 Curlew, 72 Redshanks, 32 Dunlin, four Greenshanks, three Common Sandpipers, three Ringed Plovers, 25 Red-breasted Mergansers, 15 Shelducks, eight Mute Swans, seven Little Egrets, five Little Grebes and a female Wigeon.
Posted by Will Salmon at 18:27 No comments: