Whilst searching unsuccessfully for a Black Redstart around Teignmouth Port yesterday morning I came across a group of 31 Turnstones foraging along the quay - my best ever patch count and the largest number in the estuary for at least eight years (having checked DBR reports since 2010). There was little else of note although the Red-breasted Mergsanser party the other side of Shaldon Bridge had increased to 17.
Posted by Will Salmon at 11:38 No comments:

An immature male Black Redstart was around the Rugby Club in Teignmouth this afternoon, the first at this previously regular site since the 14/15 winter. Also present at least one male Blackcap.
Posted by Dawlish Warren at 15:03 No comments:

A Black-throated Diver, the first of the year, was a surprise in the estuary. The bird was feeding in the southern channel off Shaldon on the dropping tide. On the Salty a total of 10 Shelduck with a Mistle Thrush on Teignmouth Rugby pitch.
Posted by Dawlish Warren at 23:12 No comments:

The snow-dusted peaks of Dartmoor provided an aesthetically pleasing backdrop to Saturday morning's count of the upper estuary, which was partly delayed by the discovery at Passage House of a presumed Common Sandpiper showing some characteristics of Spotted Sandpiper. Though it was always alone it appeared somewhat smaller than a typical Common Sand, with a fairly short primary projection and rear end, bold eyestripe and plain tertials, though the bill was fairly uniform-coloured and the legs weren't as yellow as you might expect. Any thoughts or comments would be appreciated (apologies for the picture quality). 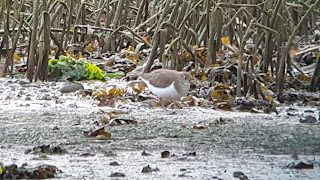 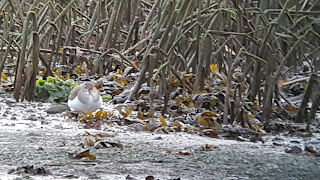 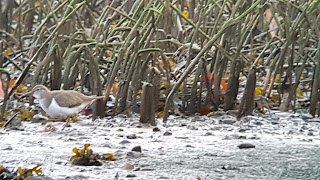 Totals were generally down on what might be expected for December although the tides were lower than on most WeBS weekends. Fifteen Red-breasted Mergansers, 29 Shelducks, 60 Dunlin, 84 Redshanks, four Greenshanks, five Ringed Plovers and six Little Grebes were among the more notable counts.

Late news for Thursday: a Green Sandpiper showing no characteristics of Solitary Sandpiper was on the floods at Teigngrace south of the level crossing.
Posted by Will Salmon at 20:56 No comments:

A Black-tailed Godwit flew over Teignmouth just before midnight, only the fourth record of the year on patch.
Posted by Dawlish Warren at 23:32 No comments: