After yesterday's skua-fest hopes were high for more of the same this morning and a quick check of the Dawlish Warren Twitter feed prior to seawatching from The Ness suggested large numbers of skuas were still present in the bay. However things were unexpectedly quiet for the first 45 minutes with just a single Arctic Skua through, though Lee Collins at Dawlish Warren informed me that plenty of skuas were still about. I scanned further out across towards Exmouth, and eventually began to pick up some skuas (plus numerous Gannets and Kittiwakes) heading south-eastwards out to sea. Unfortunately this meant that by the time they were passing the Teign they were miles offshore, much further out than yesterday, and most had to be put down as Arctic/Pomarine with the few that came closer looking like Arctics. I counted 30+ in two hours, along with 12 Common Scoters, two Great Northern Divers and best of all a Merlin that flew south at 09:05. A Firecrest was again calling in the holm oaks of The Ness having shown well there yesterday afternoon.
Posted by Will Salmon at 21:42 No comments:

Spent the late afternoon with the scope set up from the window and as hoped managed to add Arctic Skua to the house list. What was less expected however was seeing at least a dozen of them, most heading south but some also chasing Kittiwake and lingering. There were at least three or four too distant to identify but none of them suggested any different.

Also from the window an adult Mediterranean Gull offshore with 14 Turnstone and five Ringed Plover on the Salty.

Posted by Dawlish Warren at 21:54 No comments:

Seawatching from Teignmouth yacht club from 08:00-09:20 this morning produced a Great Northern Diver, 3 Arctic Skuas, 2 skua sp, 12 Sandwich Terns, 6 Common Scoters, 150+ Gannets and a dozen Common Gulls all heading south. I followed this up with walk around The Ness where a Firecrest was calling briefly in a holm oak behind Shaldon Zoo.
Posted by Will Salmon at 15:47 3 comments:

Nothing outstanding during this morning's count but a good variety nonetheless. Totals included 415 Oystercatchers, 68 Curlew, 43 Redshanks, 12 Turnstones, 6 Common Sandpipers, 5 Ringed Plovers, 5 Lapwings, 4 Black-tailed Godwits (with a possible flock of 20 high overhead), one Snipe, 32 Cormorants, 3 Sandwich Terns, 46 Little Egrets, 30 Mallards, 6 Teal, 2 Little Grebes and a Coot; the latter at Luxton's Steps pond, my first patch record beyond Decoy Lake. Curiously - or worryingly - no Shelducks or Greenshanks and only one Dunlin could be found.
Posted by Will Salmon at 21:49 No comments:

The highlight of a visit to Decoy Country Park this morning was a partial eclipse male Scaup, presumably the same bird that is now back for at least its third winter on the lake. Saying that, I'm fairly certain it was a Scaup and didn't have any hybrid elements. My area of doubt relates to the colour of the head - a rich brown, almost chestnut in bright sunlight - and the area of black on the bill tip, which appeared quite large (though not as large as Tufted Duck). Everything else seemed fine for (Greater) Scaup. I'm relatively unfamiliar with this plumage and there seem to be rather few photos online to compare, so I'd appreciate any feedback. Apologies for the quality of the photos. 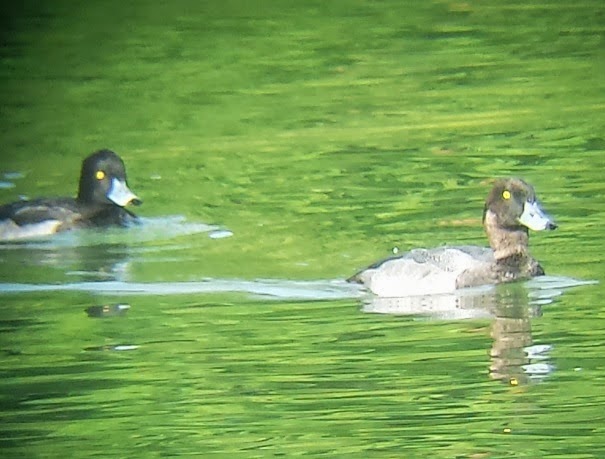 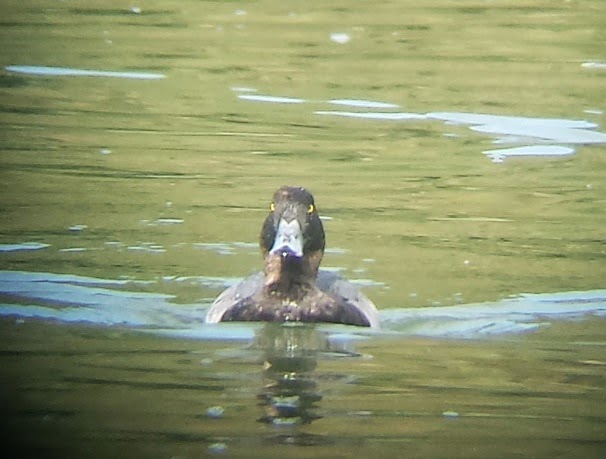 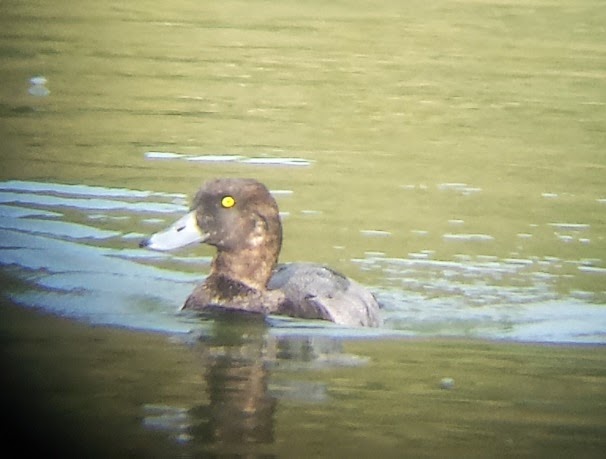 ﻿
Rich brown head in bright sunlight, with hint of green in front of eye

Whilst I was grilling the ducks there was a small overhead passage of 4 Skylarks, 9 Meadow Pipits and a Siskin, with two Grey Wagtails and a Swallow briefly circling the lake and a Marsh Tit calling from adjacent woodland. At Newton Abbot Racecourse late morning were two Wheatears and a Stonechat, with 12 more Skylarks on the move.
Posted by Will Salmon at 21:40 No comments: