At 11:10 this morning I got the news of the Black Stork (thanks Kev and Mark) that flew WSW over Dawlish Warren and then Haldon. I was out the door in a shot with my scope and running up to a view point close to my house which overlooks Dartmoor, the Teign Valley, Haldon, and the airspace above the estuary...

Kev reckoned it would come out somewhere around Chudleigh, so I focused my sky scanning there but also looked over the estuary just in case it decided to fly south. I was actually pretty confident I would see it - "how can I miss a massive bird on a flight course basically right towards me," I thought! Well, after an hour of seeing nothing but Buzzards, I started loosing hope. Absolutely no sign of it. There was a flock of about 40 gulls circling distantly, but nothing nearby. I almost had a heart attack when a heron flew past, and seeing it with the naked eye first, I seriously thought I'd be seeing the stork when I lifted my bins!

After two and a half hours of watching I admitted defeat and headed back home. If only it continued in the direction it was seen from the Warren, I'm sure I would have seen it. So close, and really really annoying! :-(

Two days ago, the second Bee-eater of the year flew south over Teignmouth, so I spent yesterday searching the farmland south of the estuary on the off chance that I would relocate it, but kind of inevitably, I failed! Oh well - I'm sure I'll get lucky in the future if I keep looking.
Posted by Laurie Allnatt at 21:53 No comments:

After getting gripped by news of Poms and Stormies from the Warren this morning, I managed to get to Teignmouth for 13:30 where I joined Kev at the Yacht Club. While we were looking out to sea, all the gulls in Teignmouth went up, but we couldn't find the offending raptor. Yesterday the years first Osprey flew over Teignmouth so it may have been another one today.

Offshore there were c15 Manx Shearwaters, a few feeding Kittiwakes and a small diver that flew in from the south and landed far offshore - probably Red-throated. Lee then texted through news of two pale morph Arctic Skuas heading south, and sure enough, 15 minutes later we picked them up fairly close in, and giving really good views in the full sun. Beautiful birds!

After Kev left, I had a possible first summer Yellow-legged Gull flying north, but couldn't get enough detail to be sure. It had a very bright white rump and dark primaries though.

A little later on, Will arrived, and we got news from the Warren of more skuas heading our way, but even after an hour carefully scanning the horizon, we failed to pick them up! We did however have a further c15 Manx Shearwaters and a dozen Fulmars, one of which was a very dark dark morph bird.
Posted by Laurie Allnatt at 21:26 No comments:

Absolutely no waders at Passage House at high tide, but around the marshes there were c10+ Reed Warbler and just two Sedge Warbler. I spent awhile listening to, and trying to photograph one of the Reed Warblers. Its repertoire was made up of Swallow, Blue Tit and House Sparrow calls, as well as the usual Reed Warbler song. 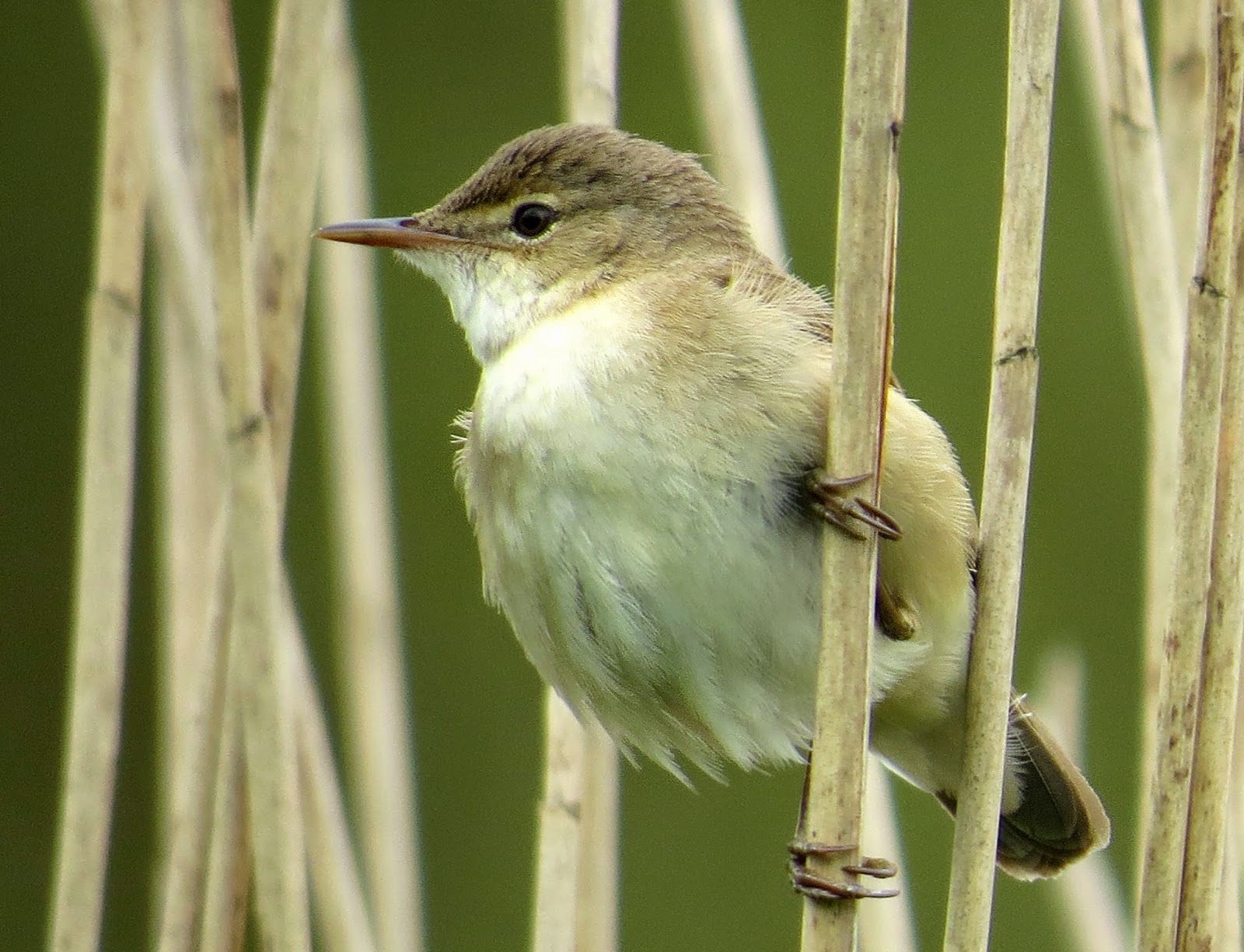 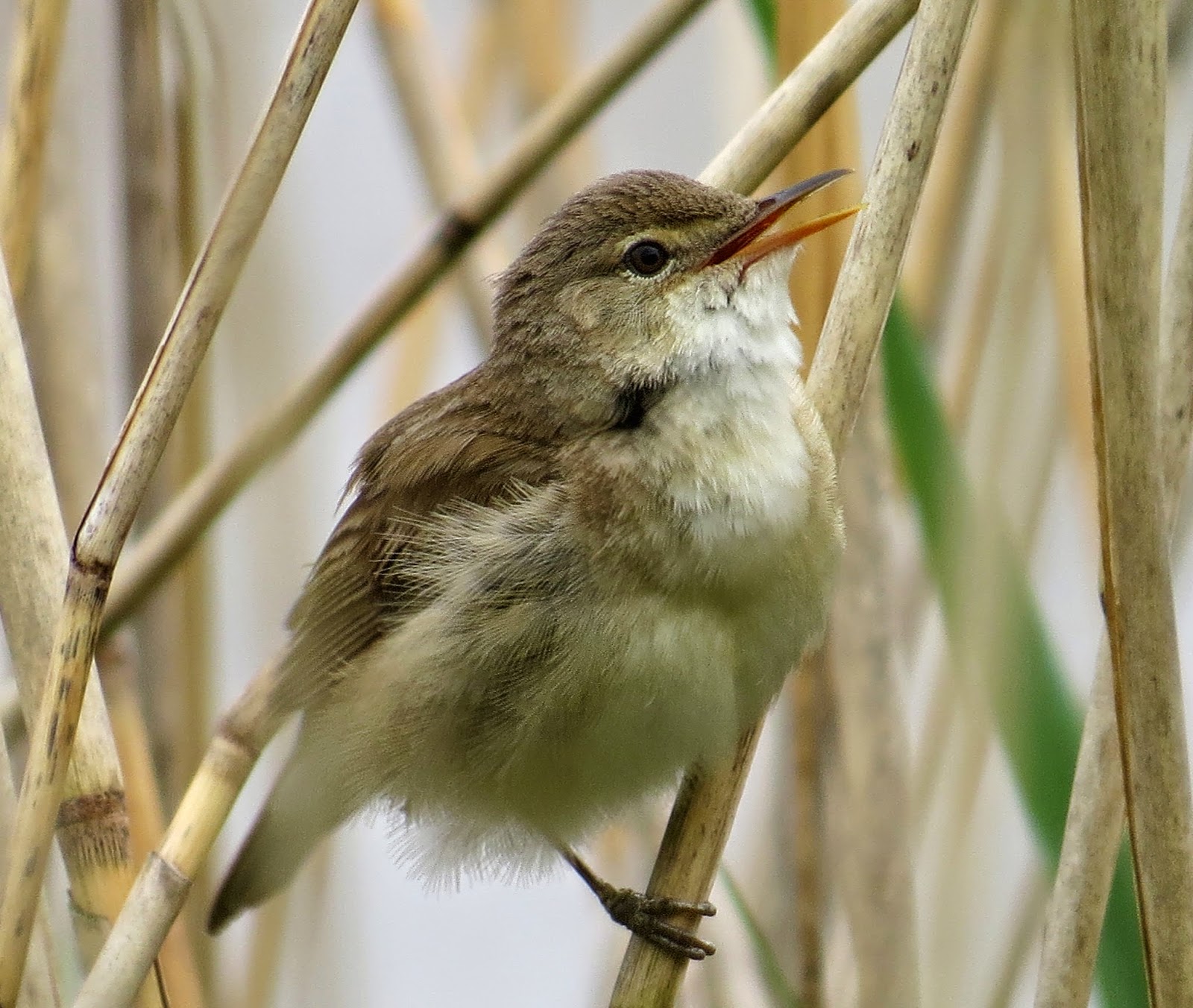 It started off really quiet, but at about 11:00 when the rain came through, a few birds started to appear. A surprise was the years first Balearic Shearwater which passed relatively close, revealing its golden underparts in the sun between showers. Nice to see, and pretty early as well. Also two Manx Shearwater, c50 Kittiwake, c15 Sandwich Tern, three Common Scoter and c50 Auk sp. (mostly, if not all Guillemots).

A Great Skua spent a few minutes far offshore around a trawler, and five Swift and four Swallow flew north over the sea.
Posted by Laurie Allnatt at 17:02 No comments:

Yesterday's WeBS count was uninspiring to say the least and gave the impression that spring migration is largely over. The high number of kayakers, water skiers and sailers on the estuary combined with the clear weather probably didn't help, but despite counting at Flow Point and Passage House I couldn't find any waders bar a solitary Curlew. Other totals were nothing to write home about and included 27 Mute Swans, 28 Shelducks, 7 Little Egrets, 14 Cormorants and a Sandwich Tern. An hour scanning the skies produced plenty of Buzzards and a Sparrowhawk but no scarcer raptors.
Posted by Will Salmon at 08:37 1 comment:

I made the effort to get up and out early this morning for a seawatch at Teignmouth from 05:40-07:10. The highlight was a decent total of 10 Great Northern Divers - 2 on the sea, 4 south, 1 north and 3 which arrived from the north then circled and headed high up the estuary. All but one were in full breeding plumage. Also noted were 31 Kittiwakes, 7 Sandwich Terns, 11 Shelducks, 24 Dunlin, 5 Whimbrel (the waders flying into the estuary), 9 auk sp and singles of Great Crested Grebe, Guillemot, Black-headed Gull and Wheatear, the latter arriving 'in-off' and perching on the sea wall briefly. A quick look at Coombe Cellars on the way back revealed singing Whitethroat and Sedge Warbler around the edge of the reedbed.
Posted by Will Salmon at 12:34 No comments:

I've just come back from a bank holiday weekend break in Faro, Portugal where from my hotel balcony I spent a good deal of time watching Common and Pallid Swifts and learning the subtle differences between them. It was perhaps fitting therefore that my next patch year tick came when several vocal (Common) Swifts flew over my house earlier this evening, making plenty of noise to announce their return.
Posted by Will Salmon at 21:09 No comments:

An evening seawatch off Dawlish Warren saw a couple of Roseate Tern head south, they then lingered off Dawlish and were joined by at least two others before continuing south. I decided I would try and connect with them off the Teign so hotfooted it back to Teignmouth. In a short while I was in position at the yacht club when news came through of a fifth bird heading south close in past Dawlish; excellent I thought if I had missed the first four at least the last bird would add itself to my Teign list.

By dark I had been proven wrong, they never arrived, however at least 87 of the 97 Manx Shearwater seen off Dawlish did pass south offshore, so where do the terns go? The only other birds passing were a single Whimbrel and a mixed flock of five Dunlin and four Ringed Plover that headed into the estuary.
Posted by Dawlish Warren at 22:29 1 comment: