Even more Crossbills and Firecrests

Fewer birds were on the move between squally showers at Bundle Head this morning, but did include seven Crossbills south at 07:14 along with 82 Goldfinches, 38 Meadow Pipits, 36 Chaffinches, 26 Linnets, eight Siskins, two Redpolls and a Redwing between 06:50 -07:40. A check of The Ness shortly afterwards turned up three Firecrests, two Chiffchaffs and a Blackcap.

Chaffinches were the main feature at Bundle Head yesterday morning with 204 heading south between 07:50 - 08:50, joined by at least one wheezing Brambling . Other totals included 141 Goldfinches, 72 Meadow Pipits, 29 Pied/White Wagtails, 21 Linnets, 16 Siskins, four Redpolls and four Swallows.
Posted by Will Salmon at 20:00 No comments:

A notable movement of  26 Crossbills (22 N, 4 S) was the highlight of another Bundle Head vis mig watch yesterday morning between 07:50 - 08:40, which also produced 77 Goldfinches, 23 Meadow Pipits, 20 Pied/White Wagtails, 11 Chaffinches, nine Siskins, eight Swallows, two Skylarks, two Song Thrushes and a Redpoll. Later in the morning Laurie had another couple of Crossbills fly over The Ness, which contained two Firecrests, 12 Goldcrests and three Chiffchaffs.

On Thursday a Great White Egret was reported opposite Coombe Cellars; this was possibly the same bird seen at Powderham the following day.

Yesterday morning there was a fair bit of movement going on over Bundle Head first thing; totals from 07:30 - 08:30 comprised 185 Goldfinches, 141 Meadow Pipits, 55 Linnets, 29 Siskins, 16 Chaffinches, 35 Swallows and 22 Pied/White Wagtails, mostly heading south. Two Peregrines were seen working together to take down a Woodpigeon just offshore. Today was quieter in terms of numbers although there was a bit more variety with another Crossbill, a House Martin and a couple of Grey Wagtails overhead. The bushes held very little except for a good total of three Firecrests; two in hedgerows at Bundle Head and one in The Ness. 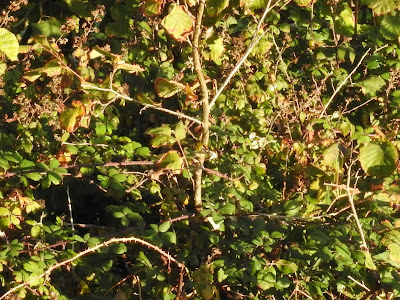 Spot the Firecrest
Posted by Will Salmon at 11:54 No comments:

An enjoyable couple of hours between Bundle Head and The Ness this morning produced one Crossbill (over the conifer plantation just inland), one Firecrest (possibly Laurie's bird from Wednesday in The Ness), one Stonechat, 10 Blackcaps, seven Chiffchaffs, seven Goldcrests, nine Swallows and a House Martin. Overhead, small numbers of Meadow Pipits, Skylarks, Siskins and Linnets were on the move and butterflies still on the wing included Red Admiral, Meadow Brown and Speckled Wood. 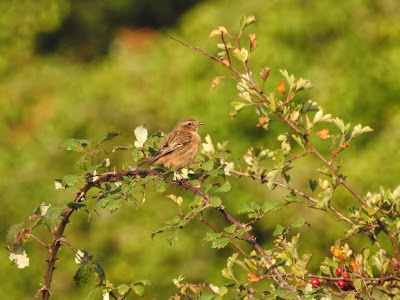 The trees at The Ness seemed alive with birds when I visited at midday. A Firecrest was in sycamore and holm oaks at the top of the golf course, and walking down the path to The Ness there were around five Chiffchaffs, three Goldcrests amoung numerous species of tit.

Posted by Laurie Allnatt at 21:27 No comments: