Good numbers of birds were present on the estuary this morning though there was a slight lack of quality. Black-headed Gulls and Herring Gulls were particularly abundant with conservative estimates of 1000+ and 300+ respectively between Flow Point and Passage House; among them was a Lesser Black-backed Gull and a moulting adult Mediterranean Gull. Other counts included 32 Mute Swans, 41 Little Egrets, 23 Shelducks, 132 Oystercatchers, 74 Curlew, 13 Whimbrel, nine Common Sandpipers and a Little Grebe. The best bird of the morning was a Hobby that flew west over Flow Point, upsetting the local hirundines.
Posted by Will Salmon at 18:24 No comments:

A few more birds around today during high tide, with six Common Sandpipers, five Whimbrel, and singles of Redshank and Dunlin. Four Mediterranean Gulls (one 2nd-summer and three adults) eventually appeared within the flock of gulls, one of which was wearing a red ring from Poland. 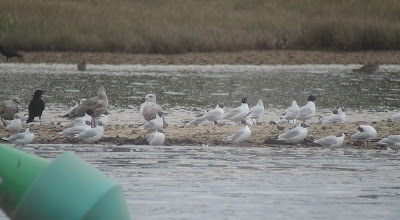 Along Aller Brook there was some good plant diversity with several Pyramidal Orchids. Also a few Marbled Whites on the wing. 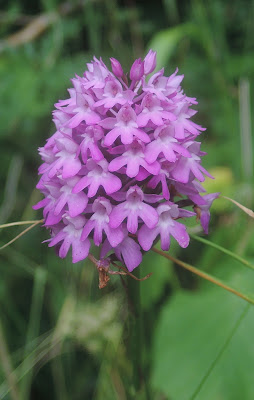 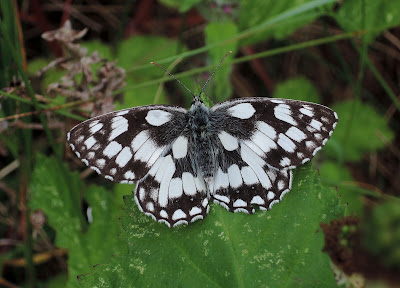 Posted by Laurie Allnatt at 20:31 No comments:

At Passage House just before the high tide, there were 84 Curlew, a Whimbrel, five juvenile Black-headed Gulls and a juvenile Herring Gull. At Newton Abbot Quay, a slight surprise were two female Mandarins. 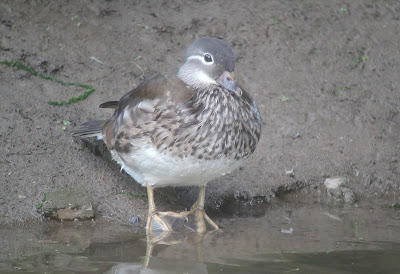 Posted by Laurie Allnatt at 19:50 No comments:

This 2nd-summer Mediterranean Gull was at Passage House yesterday lunchtime along with four Common Sandpipers and a Whimbrel. 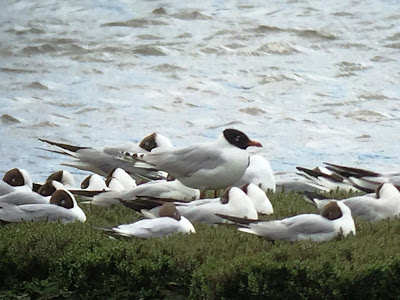 It has been quiet on patch this summer but a few records do stand out. A Barn Owl reported hunting fields to the north of the estuary mid June was welcome news, with a first summer Black-throated Diver later in the month off Bundle Head (from a boat) more unexpected. More recently a Bar-tailed Godwit was over Teignmouth on 3rd July, the first juvenile Sandwich Tern was with three adults on the Salty on 8th July and an adult summer Mediterranean Gull there today.
Posted by Dawlish Warren at 13:47 No comments:

It's been an exceptionally quiet few weeks on the Teign, so in a departure from this blog's usual content I thought I'd do a brief post on some of the avian highlights of my holiday to Corfu last week. This was not a 'birding trip' and the island isn't well known for its ornithological diversity, but without trying hard at all I recorded 27 species, mostly around my hotel at Nissaki Beach on the north-east side of the island. Olive groves covered the land and Pantokrator, Corfu's highest peak, was just a few kilometers away. The best birds were:

There are weekly flights from Exeter airport to Corfu during the summer season with Thomson.
Posted by Will Salmon at 13:49 No comments: