Despite choppy conditions off Teignmouth late morning the sea produced seven Great Northern Divers, two Red-throated Divers and two diver sp. The 10 Eiders were still around, but more spread out and frequently disturbed by a couple of jet skiers. Later on Decoy Lake just a handful of Tufted Ducks, a Little Grebe and a Kingfisher of note.
Posted by Will Salmon at 22:29 No comments:

The party of 10 Eiders was still present this morning although slightly further south just off The Ness. At least eight Great Northern Divers were between here and the yacht club, including two very close in near the mouth of the estuary, although there was no sign of the Long-tailed Duck. 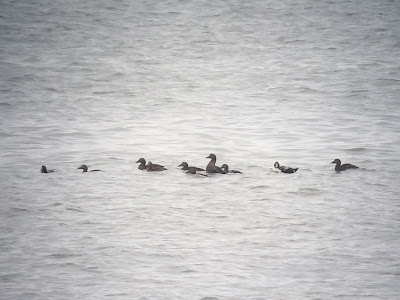 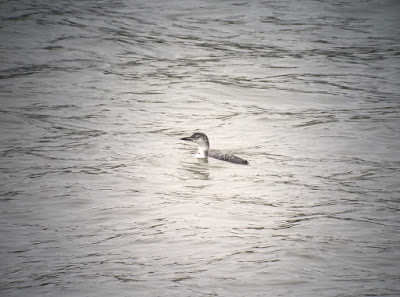 With the weather clearing and it looking calm offshore a quick look off Teignmouth seafront seemed appropriate - and so it proved. Before getting out the car a Great Northern Diver was seen around the groynes and distant flock of duck were visible.

From the roof of the yacht club the duck were soon confirmed as a flock of 10 Eider, a great patch record. With them was a second Great Northern Diver and a proper scan showed at least seven birds across the bay. Whilst scanning a small bird was picked up distantly off the Ness, once on full zoom it could be identified as an immature Long-tailed Duck, presumably the bird reported on Saturday. Later on a much better view was obtained from Ness beach were it showed well until flushed by a surfacing Great Northern Diver and flew north.
Posted by Dawlish Warren at 21:11 No comments:

No sign of the Long-tailed Duck (s) that were seen last week and possibly yesterday, but two Great Northern Divers and a Red-breasted Merganser were offshore with what was seemingly a very distant flock of about 12 Tufted Duck. A small bird flew south which could well have been a Little Auk, but again it was way too distant to be sure.
Posted by Laurie Allnatt at 22:13 1 comment:

A look around The Ness showed at least two Firecrest were still present, with 50+ Wood Pigeon and three Jay feasting on Holm Oak acorns. Otherwise quiet with an adult Mediterranean Gull and half a dozen Shag offshore and a couple of Skylark overhead.
Posted by Dawlish Warren at 21:43 No comments:

A good sized flock of 28 Dunlin was at Passage House this morning with three Common Sandpipers, two each of Black and Bar-tailed Godwit, 70 Redshank, one Greenshank, 78 Curlew, three Snipe, eight Little Grebe and the first returning flock of 11 Red-breasted Mergansers.

Three female Shovelers were on Decoy Lake with c. 10 Tufted Ducks, but no sign of the Scaup yet.

A couple of Black Redstarts have been around my house in Newton Abbot over the last few days including an adult male. Here's a female/1st winter... 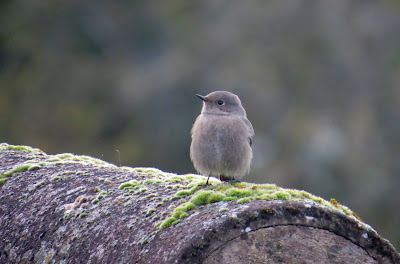 Posted by Laurie Allnatt at 19:31 No comments: