Woodpigeon passage really got going today, with 23,500 counted from Bundle Head between 07:45 - 09:15. While around half of the birds flew south overhead, just inland or west over Teignmouth/Little Haldon, half were seen crossing Lyme Bay/Babbacombe Bay in a broad arc, with several flocks numbering over a thousand birds picked up distantly over towards Hope's Nose. Much closer was a Brambling which called loudly overhead then turned back around north. Also on the move 168 Goldfinches, 119 Meadow Pipits, 67 Linnets, 34 alba Wagtails, 30 Chaffinches, 26 Siskins, 14 Greenfinches, five Skylarks, two Grey Wagtails, two Mistle Thrushes, two Jays and a Swallow.

Another hour watching migration over Bundle Head from 07:40 - 08:40 this morning. Going south: 139 Meadow Pipits, 102 Linnets, 63 alba Wagtails, 37 Goldfinches, 32 Siskins, 21 Chaffinches and 10 Greenfinches. Small flocks of Jackdaws and Woodpigeons were also on the move just inland but weren't counted. A Firecrest was heard briefly by the road.

A busy autumn day started with an hour of vis mig at the top of Bundle Head from 07:30 - 08:30. Overall numbers were lower than last week but there was greater variety, with 29 Stock Doves probably the best count; also 66 Goldfinches, 42 Meadow Pipits, 35 Linnets, 19 alba Wagtails, 16 Chaffinches, 10 Greenfinches, five Skylarks, three Swallows, three Bullfinches, a Jay, a Grey Wagtail and a Great Spotted Woodpecker.

At around 12:45 a Great White Egret was discovered in one of the channels south-east of Passage House (found by Paul Darlington; thanks for the text Mark Bailey); this is believed to be the first confirmed record for the Teign. It was still present from 5pm until dusk and gave excellent views at times, including side-by-side with some of the local Little Egrets. 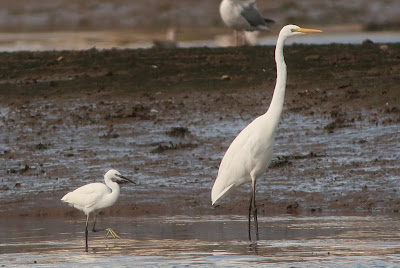 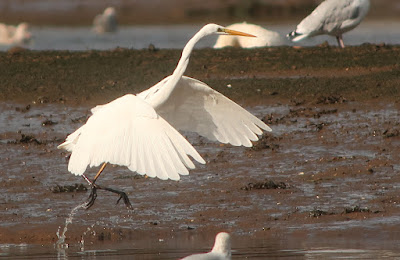 After yesterday's rain, today dawned bright and calm and the visible migration floodgates were well and truly opened over Bundle Head. Meadow Pipits dominated proceedings with a whopping 780 logged going south between 07:10 and 08:10, with a supporting cast of 165 Linnets, 112 Goldfinches, 94 Swallows/hirundine species, 12 alba Wagtails and a Grey Wagtail. The next few weeks should see Skylarks and Chaffinches begin to feature in overhead movements, along with (hopefully) a few scarcities such as Crossbill and Brambling, followed by some big movements of Woodpigeons in early November.

Seawatching from Teignmouth yacht club from 07:15 - 08:45 this morning produced a heavy passage of 1050 Kittiwakes, with birds moving south at a rate of 100 every five minutes from 07:20 - 08:05 before tailing off. Just one Balearic Shearwater went through but eight Arctic Skuas was a good total, the majority of which were following the trail of Kittiwakes. Also two late Common Terns, an adult Mediterranean Gull, five Common Scoters, 200+ Gannets and 30+ auks.