The onset of colder weather over the past week has probably played a role in the sudden arrival of Pochard at Decoy Lake; there were at least 10 today, compared to none at all last weekend. Most waterfowl was keeping to the marginal vegetation due to sailing taking place, so although I couldn't see the drake Scaup it may still be present. I also had a brief look at the upper estuary from Passage House, where 15 Snipe, 12 Greenshank and a Dunlin were the pick of the waders.
Posted by Will Salmon at 21:19 No comments: 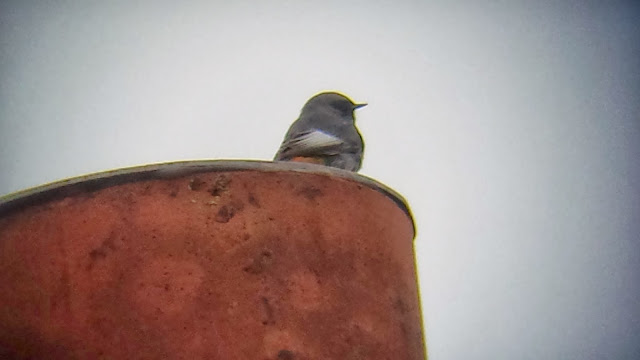 *Ok so perhaps this statement is a slight exaggeration, since they usually rank alongside large gulls and Carrion Crows on my list of not-so-favourite birds, but the movement of c.2,250 Wood Pigeons over the patch between 07:55 and 08:35 this morning was impressive enough to endear them to me a little more than usual. From my vantage point on Shaldon golf course I observed a dozen or so parties arriving from the direction of Haldon, moving south or SSW with the largest flock numbering around 500. 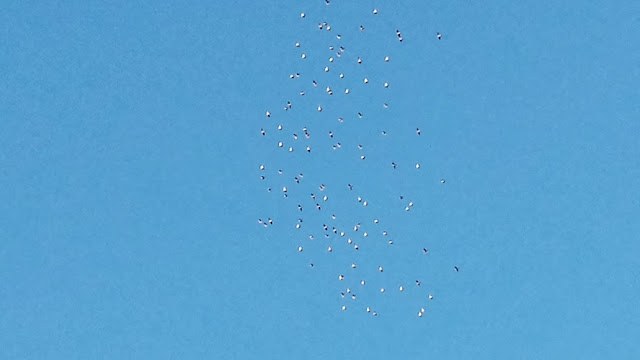 Just a small snapshot of the activity

Numbers of other common migrants were disappointing but 21 Chaffinch, 15 Goldfinch, 5 Meadow Pipit, 5 Jay, 3 Bullfinch, 3 Skylark and a Great Spotted Woodpecker were logged with 7 Goldcrest and 4 Song Thrush in the bushes between The Ness and Bundle Head.

The drake Scaup was still on Decoy Lake mid-morning along with 33 Tufted Duck and singles of Gadwall, Great Crested Grebe and Kingfisher.
Posted by Will Salmon at 20:18 No comments:

Back for a Birding Weekend

I was back from university this weekend, so I tried to fit in as much birding as possible. On Saturday, I decided to take a look offshore from Teignmouth for an hour in the morning in the hope of seeing some Great Northern Divers, which have managed to completely evade me for the year so far! I soon found two together fairly far offshore and then another a little further north. There wasn't much else on the move, only one Red-throated Diver south, two Common Scoter on the sea, and the Bonaparte's Gull which had apparently just taken a trip to Dawlish Warren.

Today brought nice clear calm conditions perfect for Wood Pigeon migration. I had a quick look out from my house in Newton Abbot at about 9am, and in just 10 minutes, saw roughly 1500 Wood Pigeons fly south over Teignmouth in a continuous stream of large flocks.

At 10:30 I met up with Will and we headed out to the estuary. We first checked Luxton pond which held six Teal and a Little Grebe. Then we counted the birds at Flow Point. There was a Flounder fishing festival on today and the estuary was lined with lots and lots of fishermen, so the birds all had to roost on the railway wall. Counts were, 16 Redshank, 319 Oystercatchers, 56 Curlew, 4 Turnstone, 8 Ringed Plover, 6 Red-breasted Merganser and 2 Common Sandpipers.

Next we moved to Passage House where the tide was beginning to fall. Here there were 12 Greenshank, 9 Lapwing, 1 Kingfisher, 15 Mute Swan, 6 Shelduck, and a further 58 Redshank, 15 Oystercatcher, 56 Curlew, 3 Common Sandpipers and 6 Little Grebe. As the tide dropped, a total of 25 Snipe were enticed out to feed along the water's edge - always a lovely sight! 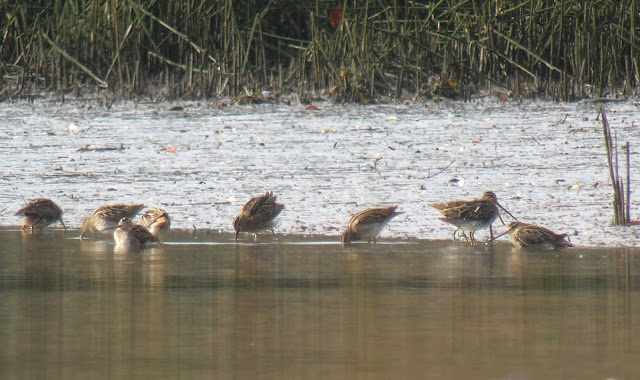 Our final visit of the day was to Decoy lake where Will's Scaup and Gadwall were chilling out with the Tufties in the fading light. A nice end to a busy weekends birding.
Posted by Laurie Allnatt at 17:28 No comments:

It's always slightly disheartening to wake up on a morning you've booked off for birding to find the weather forecast was wrong and it's chucking it down. This was the scenario that faced me this morning but I mustered enough enthusiasm to get down to Teignmouth for 08.30 for an hour's seawatching. The rain actually held off most of the time I was there, but precious little was moving offshore - only 7 Common Scoter and a dozen or so Gannets south. However there were two Great Northern Divers on the sea, albeit a fair distance out.

I moved on to Decoy Country Park mid-morning, which proved to be a good move as I found a drake Scaup mingling with the some of the 25 Tufted Ducks on the lake. It's possible that this is the same bird seen here earlier this year, in which case it's clearly fond of the surroundings. Also present were a drake Gadwall, a Great Crested Grebe and our old friend colour-ringed Mute Swan NY9; twenty Redwing and a Siskin flew overhead. 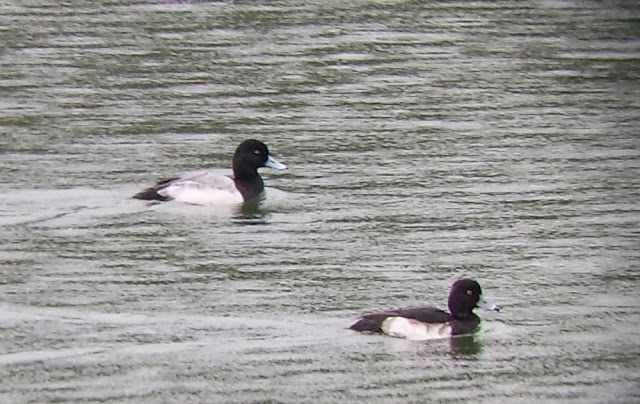 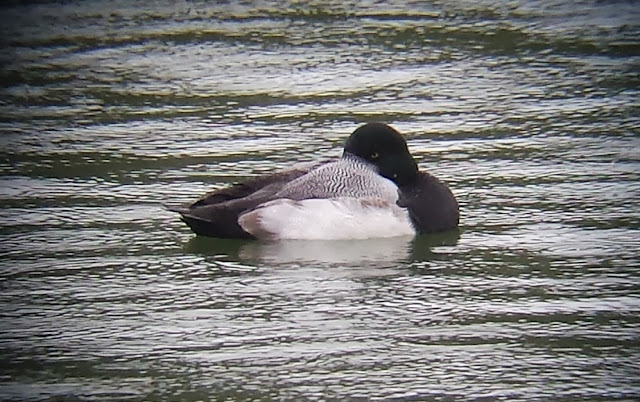 I checked Passage House on the way home and came up with 17 Redshank, 8 Lapwing, 2 Common Sandpiper, a Greenshank and a Common Gull.
Posted by Will Salmon at 13:01 No comments:

For a change I had a look around the reedbed behind Coombe Cellars late yesterday afternoon and came up with 3+ Water Rail, 2+ Snipe, a Kingfisher and a male Sparrowhawk. After darkness had set in I followed the footpath across to Netherton, where female Tawny Owls were heard calling from two different locations in the woodland though not at the same time, so it is possible that the same individual was responsible.
Posted by Will Salmon at 08:08 No comments:

I only had time for a brief scan round some fields at Bishopsteignton this morning, where I earned a long overdue patch year tick with a male Yellowhammer associating with a group of 6-7 Cirl Bunting. Also noted were a Chiffchaff, two Raven and 15+ Meadow Pipit. 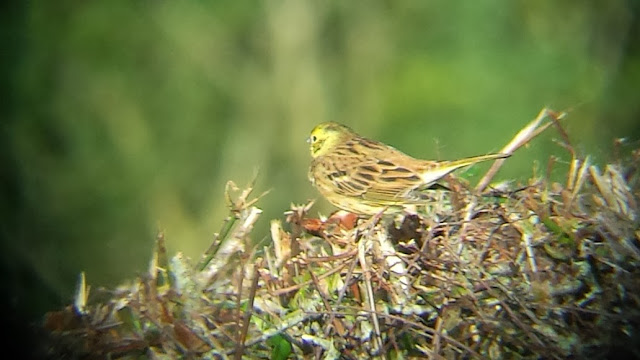 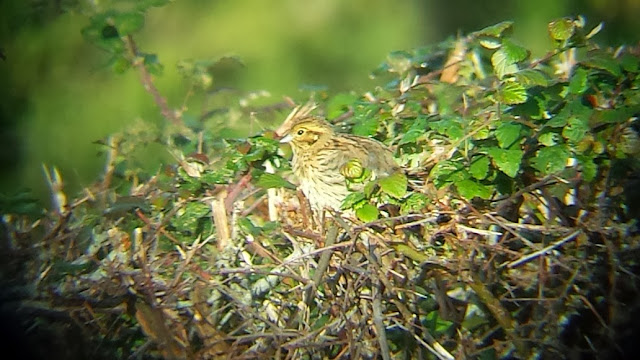 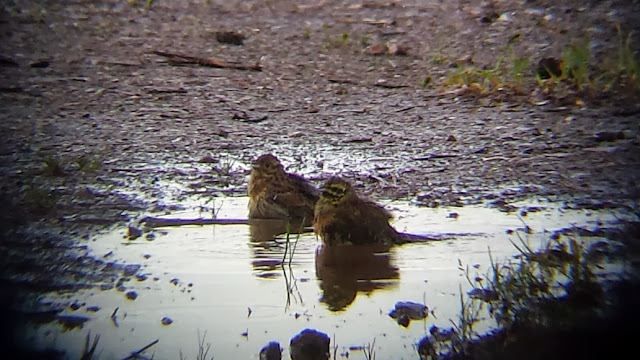 Bath time
Posted by Will Salmon at 21:36 No comments: