Spring's not over yet

A couple of visits to the patch over the past few days haven't yielded a great deal although there was enough to suggest that spring migration isn't quite over yet. On Friday a summer-plumaged Black-tailed Godwit had joined the 3 Curlew at Passage House, and 37 Oystercatchers were at Flow Point. Yesterday 25 Common Scoters flew south past Shaldon, a male Wheatear was on the rocks beneath The Ness and a Willow Warbler was singing at Coombe Cellars. Mute Swan numbers have begun to increase with 34 at Passage House where there was also a Lesser Black-backed Gull. The Dark-bellied Brent Goose has remained in the upper estuary, generally present between Netherton Point and Passage House.

I watched Passage House over the falling tide this morning and again on the rising tide late afternoon/ early evening. The most unexpected sighting was a Dark-bellied Brent Goose that flew in from the lower estuary at around 9am and was still present off Wear Farm at 5.30pm. Two Little Ringed Plovers were again on the spit off Passage House but the only other waders were four Oystercatchers and two Curlew. Breeding success was confirmed for Shelduck, Mallard and Moorhen.
Posted by Will Salmon at 20:14 No comments:

It has been quiet of late at the Teignmouth end of the patch, with a peak of 12 Sandwich Tern the best the Salty has had to offer, but a few random flyovers have just about kept it ticking over, two of them welcome house ticks.

Overnight on 8th May at least two Common Sandpiper were attempting to migrate through the low mist- more expected here in autumn. Early(ish) morning on the 11th May a couple of Siskin west over Bitton Park were unseasonal, totally unexpected though was a vocal Moorhen calling overhead on the night of 12th May. Finally, and a long awaited house tick, a single Red Kite flew North over the town at roof height late morning on the 16th May.
Posted by Dawlish Warren at 14:39 No comments:

This first-summer Mediterranean Gull was off Passage House this morning with c30 Black-headed Gulls. Also present were two singing Sedge Warblers and a Little Grebe. 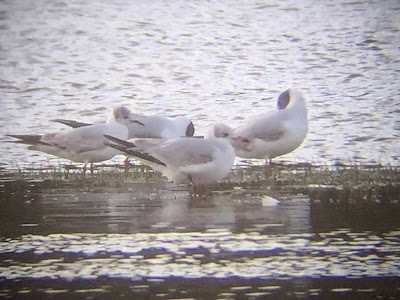 Yesterday I had a go at trying to see/hear as many species as possible on the Teign patch i.e. within 1km of the tidal limit, despite the forecast for rain for much of the day. I began just before 5am at Hackney Marshes, where all the anticipated species joined in the dawn chorus and a flyover Kestrel was an unexpected bonus - they've been scarce here this year. Nearby a lone female Wheatear and two Stock Doves were on the racecourse.

On to Teignmouth for the first seawatch of the day, and despite the moderate easterly and rain it was pretty dire with just a Great Northern Diver being the highlight although Gannet, Kittiwake, Sandwich Tern, Fulmar, Shag and Guillemot wee all added to the day list. I gave it an hour before heading to Flow Point, where three Teal were on the lagoon behind the railway and a male Red-breasted Merganser was still present. Two Swifts were picked up high over Bishopsteignton, three Linnets showed well on the saltmarsh and a Whimbrel flew down the estuary.

Decoy Country Park was the next stop, where around 30 Swallows were foraging low over the lake, joined by a couple of House Martins. On the water were 5 Tufted Ducks alongside an ever increasing selection of hybrid waterfowl. The surrounding woodland produced Coal Tit, Jay and Green Woodpecker though I was unable to locate Nuthatch or Treecreeper. By now the rain was getting quite heavy so I went home for an hour's rest and a chance to dry out.

After lunch the rain had begun to clear and I headed out to the farmland surrounding Bishopsteignton, where a singing male Cirl Bunting was quickly located and a Whitethroat gave its scratchy song from a bramble patch. A second seawatch off Teignmouth followed, and although conditions had improved nothing better than three Manx Shearwaters were seen in over an hour. Afterwards three Turnstones and a Lesser Black-backed Gull were added to the day list at nearby Polly Steps.

The final port of call was Passage House, where on the rising tide a reasonable (for the Teign) selection of waders were present including three Whimbrel, two Common Sandpipers, the year's first Bar-tailed Godwit and best of all a pair of Little Ringed Plovers. I ended the day with a decent total of 75 species; the full list is below.