A brief but productive visit to Teigngrace this morning produced half a dozen Sand Martins over the ponds and wet fields, plus a Green Sandpiper, 12+ Little Egrets, seven Mute Swans, four Teal and a couple of Meadow Pipits and Grey Wagtails.
Posted by Will Salmon at 20:21 No comments:

Prior to the excitement of Saturday afternoon there was the monthly WeBS count to do. As mentioned by Laurie two Grey Plovers were at Passage House but soon disappeared as the tide rose. Other totals as far as Salcombe Dip included 129 Oystercatchers, 37 Curlew, 21 Redshanks, four Greenshanks, two Common Sandpipers, 41 Shelducks, 21 Red-breasted Mergansers, eight Mute Swans, seven Little Egrets and two Grey Herons. 14 Turnstones were roosting on boats at Teignmouth on Sunday.

Elsewhere, the pair of Mandarins were still on Decoy Lake yesterday morning and today just three Tufted Ducks remained on Rackerhayes, where the pair of Great Crested Grebes were busy nest-building. The Surf Scoter and Velvet Scoter continue to be reported from Labrador Bay.
Posted by Will Salmon at 20:01 No comments:

A pair of Mandarin were on Decoy Lake this morning, and showed well briefly, before retreating to the cover of overhanging branches on the far side. Also present was a Great Crested Grebe and 24 Tufted Ducks, eight of which were flying circuits around the lake in preparation for their migration north.


No sign of yesterday's Grey Plovers at Passage House, but 25 Common Gulls and three Lesser Black-backed Gulls indicated a bit of migration.

At Teigngrace, three Teal were on the marsh and 19 Little Egrets were in a field amoungst some cattle.

Posted by Laurie Allnatt at 13:43 No comments:

A drake Surf Scoter was found off Labrador Bay at around midday today, in the company of a Velvet Scoter and a drake Long-tailed Duck. They were watched all afternoon by a steady stream of admirers, and fed the whole time, diving amongst the mussel farm from which they were presumably feeding off.

It's interesting to note that these birds formed a flock of their own, with the wintering flock of 50 or so Common Scoters only a little way to the north off Teignmouth. Will and I both managed to scope them from The Ness in order to get them on the patch list.


Earlier in the day on the rising tide, Will had two Grey Plovers at Passage House, although these soon flew in to roost with the Curlew and were obscured from view by vegetation. This is the first record for a couple of years.
Posted by Laurie Allnatt at 16:51 No comments:

The male Scaup made a surprise re-appearance on Rackerhayes this morning in the company of 22 Tufted Ducks, most of which will very soon be heading off towards breeding grounds. Also present two each of Kingfisher, Mute Swan and Great Crested Grebe, and a singing Chiffchaff was a welcome sound amongst the resident chorus. 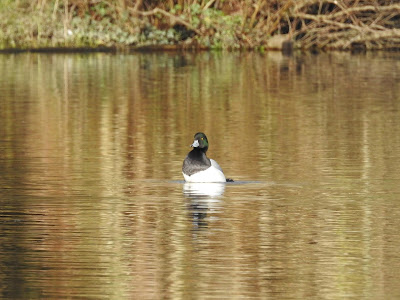 A brief visit to Hackney Marshes on Wednesday morning produced a singing Blackcap, eight Mallards, two Reed Buntings, a Water Rail and a (silent) Chiffchaff.
Posted by Will Salmon at 20:23 No comments:

As the title suggests, it's very quiet around patch at the moment. A Guillemot was offshore with a Razorbill, five Great Northern Divers, three Great Crested Grebe and 44 Common Scoter. No sign of any of the scarcer ducks on Decoy where there were just 12 Tufted Duck.

I've recently returned from a trip to The Gambia. If you're interested, I've written a trip report here.
Posted by Laurie Allnatt at 18:52 No comments:

A female Pochard was at Rackerhayes this morning alongside 19 Tufted Ducks, 10 Mallards, two Great Crested Grebes and two Kingfishers. No sign of the Scaup although it was back on Decoy Lake last week and may still be present in the area. 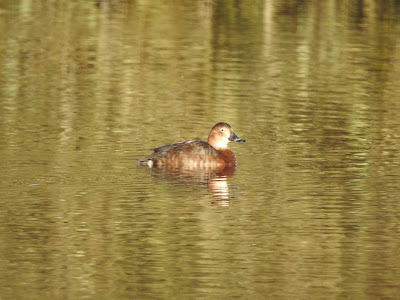 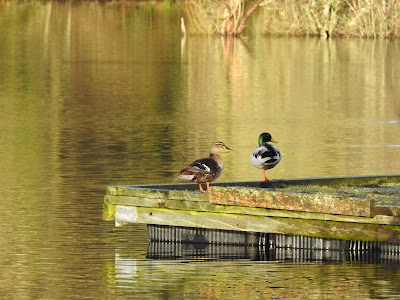 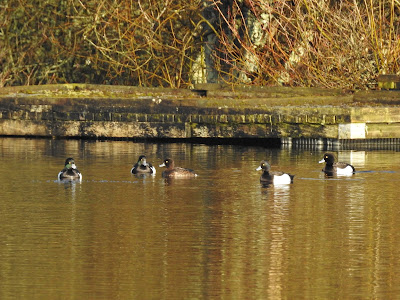